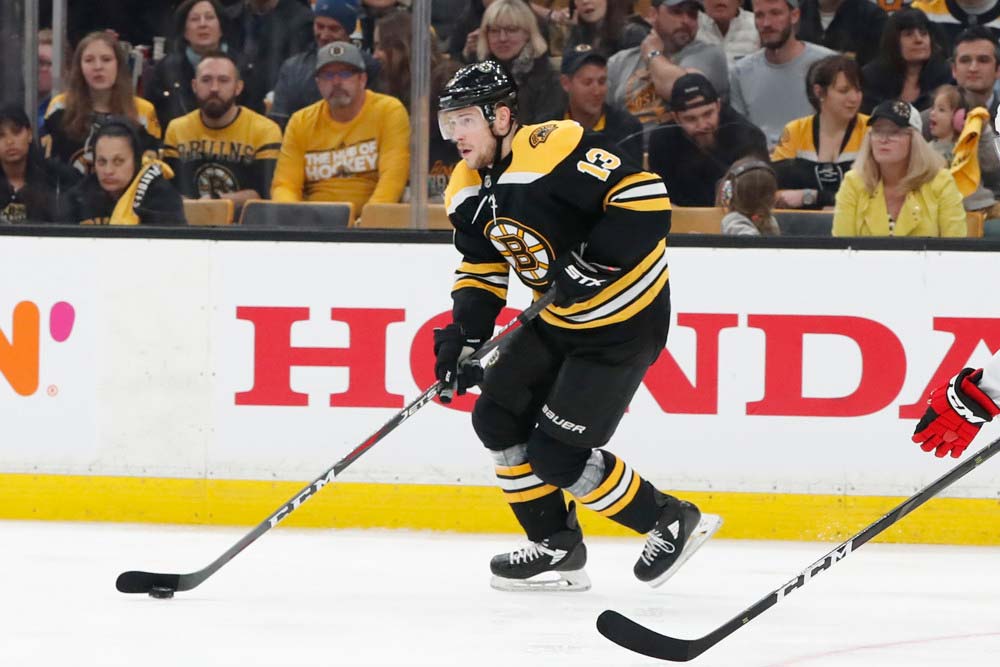 There were several big names on the move at and around the NHL trade deadline in February but those of Charlie Coyle and Marcus Johansson didn’t make much of a ripple on the league’s Richter scale. However, the pair of forwards now appear to be paying off big time for the Boston Bruins during the Stanley Cup playoffs.

The likes of Brad Marchand, Patrice Bergeron, David Pastrnak and David Krejci are still recognized as the team’s big guns, but Coyle and Johansson are providing the necessary type of secondary scoring a team needs to capture Lord Stanley’s silverware.

The Bruins are on a roll right now with a two-game lead on the Carolina Hurricanes in the Eastern Conference Final. They’ve outscored their foes 11-4 over the first 120 minutes with wins of 5-2 and 6-2. Boston took care of the Toronto Maple Leafs in seven games in the opening round and then dispatched of the Columbus Blue Jackets in six.

In those 15 playoff encounters, the 27-year-old Coyle has scored six goals and six assists while posting a plus-9 rating and the 28-year-old Johansson has chipped in with three goals and six helpers while going plus-3 in 13 games. They also bring some size to the lineup as Coyle is 6-feet-3-inches tall and weighs in at 220 lbs while Johansson is 6-foot-1 and 205 lbs.

Bruins’ general manager Don Sweeney was looking for experience at the trade deadline rather than youth or speed and he found it in Coyle and Johansson as they have combined for 1,088 games in the regular season as well as another 144 games in the postseason. Johansson has 120 goals and 334 points in 588 contests with 12 goals and 39 points in 85 playoff games while Coyle has 93 goals and 238 points in 500 outings with 13 goals and 27 points in 59 postseason encounters.

Coyle was acquired from the Minnesota Wild for Ryan Donato along with a conditional fifth-round draft pick and Johansson was picked up from the New Jersey Devils for a second and fourth-round draft pick. Coyle came over with a salary cap hit of $3.2 million a year with another season to go while Johansson’s hit is just over $4.58 million and he’ll be an unrestricted free agent on July 1st.

Neither of them really caught fire with the Bruins in the regular season as Coyle scored just two goals and four assists in 21 games and was a minus-2 with Johansson netting a goal and two helpers in 10 outings with a minus-1 mark. Johansson missed three weeks of the season with a lung contusion after being nailed by Micheal Ferland of the Hurricanes back in March.

Things have certainly been different in the playoffs though with the pair scoring some timely goals. Each of them has also chipped in with a power play marker and game winner while their other seven goals have come at even strength. Coyle has been playing in between Johansson and 23-year-old right-winger Danton Heinen on the team’s third line. We can’t overlook Heinen’s contribution here either as he’s also been a sparkplug with two goals and seven points in the playoffs with a plus-10 mark. During the regular season he notched 11 goals and 34 points in 77 games while going plus-13.

But to be honest, the Bruins are getting contributions from everybody in their lineup and that’s why they’ve got a foot in the door to the Stanley Cup Final. A league-record 19 players have scored at least one goal during the current postseason with blue liner Brandon Carlo and winger Karson Kuhlman being the only two players not to hit the back of the net yet, but Kuhlman has skated in just six games so far.

Boston has been getting just enough offense from their rearguard corps as Torey Krug has a goal and 11 points in 15 games while Matt Grelzyk has three goals and seven points and Charlie McAvoy has contributed a goal and six points. But one of the main reasons for their playoff success has definitely been their play with the man advantage as the Bruins have scored 14 power-play goals with Patrice Bergeron leading the way with five.

The Bruins’ power-play has been rolling along at a clip of 33.3 per cent to lead the league with their penalty killing ranked number one of the four remaining teams at 84.1 per cent. The Hurricanes power-play is just 11.1 per cent and their penalty killing is 69.8 per cent and if those numbers don’t improve drastically and quickly they’ll likely find themselves watching the rest of the playoffs on TV.

Carolina head coach Rod Brind’Amour also has a tough decision to make with his goaltending heading home for games three and four of the series. Petr Mrazek has been struggling and has allowed 10 goals against on just 52 shots in the series for a save percentage of 80.8. Many fans questioned Brind’Amour’s decision to leave him in net in game two when his team trailed 4-0 after the second period and were down 6-0 in the third. Mrazek wasn’t getting much help from his teammates during the contest and leaving him between the posts to face the onslaught probably put a dent in his confidence as he stopped just 19 of 25 shots.

The Hurricanes need something to shake them out of their doldrums and we could see Curtis McElhinney start in net in game three. The veteran took over in the second game of the team’s four-game sweep of the New York Islanders when Mrazek suffered a groin injury. McElhinney finished the series by going 3-0 with a goals-against average of 1.56 and a 94.7 save percentage. In comparison, Mrazek’s GAA is currently 2.73 with an 89.4 save percentage.

Brind’Amour went the entire regular season without yanking a goaltender for sub-par play though so perhaps it wasn’t a surprise Mrazek wasn’t pulled in game two against Boston. The 27-year-old has been in this situation before as he lost the first two games on the road in the opening series against the Washington Capitals and bounced back to lead his teammates to victory in seven games.

Brind’Amour will need to think long and hard about who he starts in game three since it’s highly unlikely the Hurricanes will be able to fight out of a 3-0 hole should they happen to fall into it.