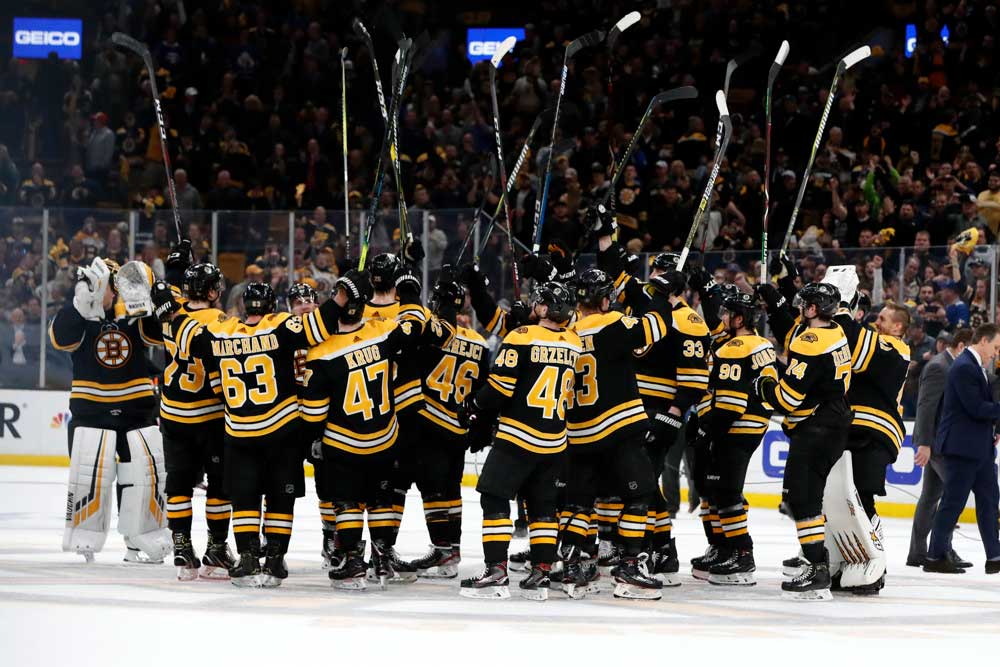 In the end, it had to go down like this. Another Game 7 in Boston offered the Toronto Maple Leafs a golden opportunity to exorcise their playoff demons and take the next step with their young core.

The signs were promising too. After a poor postseason showing last year, franchise center Auston Matthews was earning his redemption with five goals through six games against a tight-checking Bruins squad. Morgan Rielly was proving the Norris Trophy voters wrong with inspired three-zone play. Frederik Andersen was displaying steadier displays between the pipes. Though they didn’t provide much offense after Game 1, John Tavares and Mitch Marner were at least keeping Patrice Bergeron and Brad Marchand relatively quiet at even strength.

But with the series right there for the taking on Tuesday night, the Leafs collapsed once more. This time, however, it wasn’t a matter of Boston mounting some indomitable third-period comeback or puck luck betraying their trust. Toronto simply couldn’t stop tripping over itself.

Late in the first frame, Andersen snatched a long shot with his glove. Instead of opting for the sensible call — holding on for a faceoff — the netminder kept the puck in play, leading to all sorts of confusion in the defensive zone. Toronto did well to regain possession, but like a quarterback who doesn’t see a safety hidden in plain view, 22-year-old defenseman Travis Dermott threw the puck directly to Bruins forward Noel Acciari. A mad scramble ensued, and Joakim Nordstrom eventually beat Andersen with a bad-angle wrister to open the scoring.

The Leafs had every chance to not bungle that sequence of events, but they couldn’t help it.

Less than three minutes later, Jake Gardiner retrieved the puck with two Bruins forecheckers behind him. The Leafs had a free breakout if he merely directed play up the middle or the boards. In other words, the only poor choice was to reverse it. Guess what he did. Gardiner is now minus-10 across three Game 7s for a reason. Marcus Johansson gladly accepted the gift, skated right into the slot and fired the puck off the post and in to build a back-breaking 2-0 lead.

And that was it. Without even needing to force the issue, Boston stumbled upon enough of a cushion to ride out the game and punch its ticket to the conference semifinals. It was almost like the Bruins were waiting for Toronto to hand them the series on a silver platter, and it did.

Credit to Boston for capitalizing on mistakes. The Bruins weren’t some unstoppable force, though. They didn’t dictate proceedings or impose their will by any stretch of the imagination. On the balance of play, the Leafs deserved to win this matchup. They controlled 50.8% of the shot attempts (7th), 51.4% of the scoring chances (6th) and 52.2% of the goals scored (8th) at 5-on-5, and both their defense and goaltending looked stronger than they did last spring.

Unfortunately, some teams just find a way to lose. For Toronto, lack of discipline proved fatal. That begins with Nazem Kadri’s unforgivable decision to cross-check Jake DeBrusk in the face in Game 2, resulting in a series-long suspension. For the second year in a row, he put his club in a bind by hamstringing its firepower up front. Beyond that incident, penalties were an issue. It’s not that Mike Babcock’s men led a parade to the sin bin. Boston had 16 power-play opportunities, which ranked 10th in the first round. But coming into this matchup, the Bruins’ lone edge over the Leafs was on the man advantage. Staying out of the box was thus paramount.

The team predictably struggled on the penalty kill. Full-time winger Zach Hyman, who went 32.3% at the dot overall, was taking draws against one of the best faceoff men of his generation in Bergeron. That’s…probably ill-conceived. Back-door options were repeatedly available. Toronto’s passive posture was picked apart by Boston’s east-west puck movement, which exploited passing seams over and over again until the right shooting opportunity materialized.

Bruce Cassidy’s troops demonstrated the value of their power play by clicking at an absurd 43.8% success rate and scoring seven goals over the course of a seven-game series. Toronto’s inept penalty kill was an albatross for a team that seemed ready to spread its wings. Yet there were no adjustments. Nothing was done to patch up the holes.

That stubbornness wasn’t exclusive to special teams either.

At even strength, Babcock continued to emphasize the stretch dump-in despite the fact that his sandpaper-oriented scheme doesn’t complement his talent-laden personnel. Matthews, Marner and Tavares didn’t see nearly enough of the puck because they were constantly asked to chip it into Boston’s zone. Too often, they wouldn’t touch it again until their shift was over because the Bruins managed to break out cleanly or the other Leafs forwards failed to carry their weight. Only the occasional glimpse of brilliance would lead to pressure on offense, and that momentum was then promptly undermined by a return to Toronto’s lifeless system.

This was particularly evident with Kasperi Kapanen and Andreas Johnsson, who worked their tails off but could seldom provide Matthews with possession in a favorable area. While the 21-year-old pivot found the back of the net five times against the Bruins, the majority of his shifts played out like a one-man show. If he couldn’t generate chances on his own, Toronto couldn’t mount any semblance of an attack during his time on ice.

On the topic of ice time, Babcock only granted Matthews 18:48 in Game 7. In a do-or-die scenario, Toronto gave its top scorer and best player his second-lowest total of the series.

Throughout the first round, Babcock’s coaching reeked of an aversion to change. He tried to not lose games rather than have his weapons go out and win them. He wouldn’t give the opposition different looks or stack his forward units in crunch time. He line-matched with near-religious fervor. He relied on Patrick Marleau, a 39-year-old running on fumes, in crunch time. Hell, Babcock’s refusal to lean on the top power-play unit reportedly even surprised the Bruins. Clearly, he’s willing to stick to his guns when the eye test, numbers and common sense suggest a few tweaks are in order. He had 1-0, 2-1 and 3-2 series leads, squandered each and every one and still wouldn’t budge.

Ultimately, that’s why Toronto came up short again: General manager Kyle Dubas’ splashy additions of Tavares and Jake Muzzin didn’t move the needle because Babcock ensured that these were fundamentally the same old Leafs. They were fueled by an outdated philosophy that favored grit and smothered skill. Granted, Game 7 was more about individual blunders than coaching. However, Boston may not have survived those earlier deficits if not for the Leafs’ counter-intuitive vision behind the bench.

Teams can’t win in spite of their coach’s designs, and this latest disappointment revealed that the Leafs were no exception. Matthews emerged as a playoff difference-maker, Rielly silenced many doubters, Andersen was better behind a more capable defense, the roster as a whole was stronger…and it was all of little consequence in the end.

Though the Leafs stood on the verge of a breakthrough this year, dismal coaching and a fragile team psyche made them crack under pressure.

It’s hard to move forward when you continually shoot yourself in the foot.