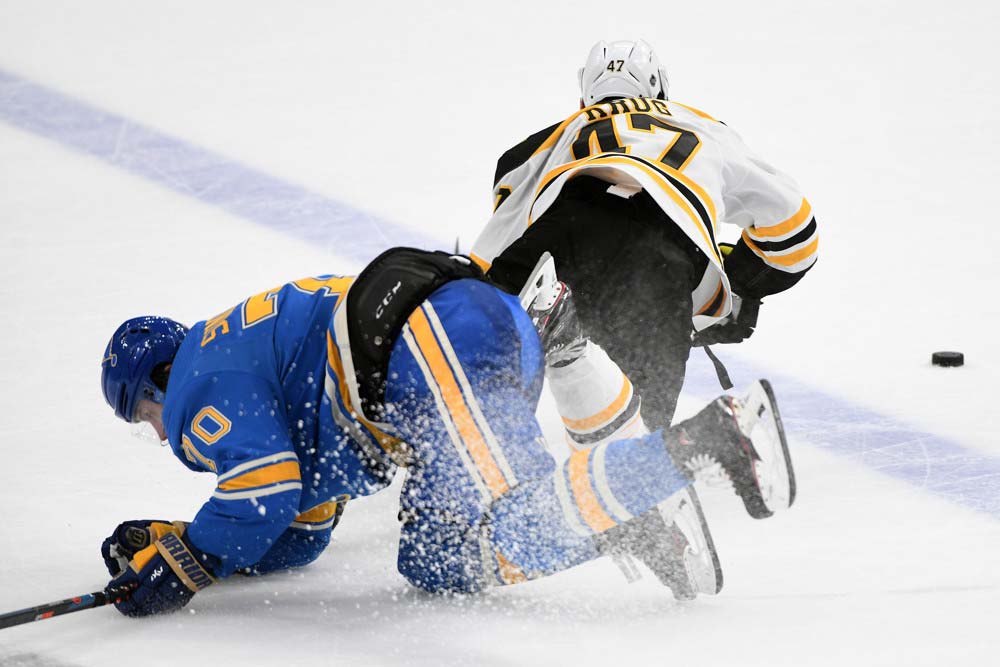 When Tuukka Rask stopped 39 of the 40 shots he faced in Game 4 of the Boston Bruins’ second-round matchup against the Columbus Blue Jackets, he didn’t just steal one victory. Tying up the series by declaring his team’s superiority in the crease — the lone area where Columbus had boasted an edge — effectively ended it. Boston pounced on a demoralized Jackets squad to claim three straight games in the blink of an eye.

In Round 3, a Carolina Hurricanes group with its head in the clouds came crashing back down to earth in a hurry. The Bruins brought a whole other level of poise and championship pedigree to the table, and by the time Rod Brind’Amour’s team recovered its bearings, it had already been swept from the postseason.

If you give Boston an inch, it will burn your village to the ground before you even know it’s there.

Conversely, the St. Louis Blues wear you down over time. They simply keep up the pressure and wait for the dam to break in due course. Against the Winnipeg Jets, Dallas Stars and San Jose Sharks, it did. Winnipeg and San Jose boast much more raw talent than St. Louis, but Craig Berube’s team was able to overcome that gap through sheer effort and commitment. Though the defense-oriented Stars put up a terrific fight, the Blues once again prevailed on the strength of their persistence in the dirty areas.

No matter the situation, they stick to the game plan. There were countless instances in the Stars and Sharks series when they could have looked for a shortcut, but they trusted the process and won the war of attrition in the end.

Boston attacks with the precision and lethality of a cobra. It only needs the smallest window to inflict a world of pain. The Bruins don’t ice the fastest skaters, but they operate quickly as a collective. The puck doesn’t stick to any single player for too long and they waste little time on the periphery. While the boards are hardly foreign territory for them, their aim is to chart a path straight to the heart of a defense.

This power play goal against Carolina is Exhibit A. Jake DeBrusk is on his knees as the action comes to his doorstep. Most players would attempt to buy some time and reset the offense, but he instantly sends a pass through the seam to Brad Marchand, who then bumps it back to Patrice Bergeron for a rapid-fire dagger.

The first line of Bergeron, Marchand and David Pastrnak is especially fond of this approach, as it has made a habit of gaining possession and unlocking defenses in one fell swoop. Few — if any — units in the league can convert defense into offense at such a dizzying pace. Bergeron’s flawless three-zone positioning and active stick serve as the ideal foil for Marchand’s high-risk, high-reward nature. The gambler knows his safety net is never far away. Meanwhile, Pastrnak is the clinical finisher prowling for a chance to pull the trigger.

The rest of Cassidy’s men don’t work with the same level of finesse, but they adopt a similar mentality: Get to pay dirt as soon as possible.

David Krejci’s uncanny ability to weave through traffic attracts a ton of attention and allows his teammates to enter the offensive zone with a head of steam. Once the likes of DeBrusk and Charlie Coyle get downhill, they’re difficult to stop. That applies to blueliners Torey Krug and Charlie McAvoy as well.

Instead of navigating through the teeth of the defense, the Bruins stay one step ahead of them. No one monopolizes possession or tries to play the hero. They move the puck crisply and efficiently in order to prevent the opposition from settling into its posture. That’s true team speed. It isn’t necessarily fancy either. Boston still plays the simple, straight-line game it’s known for — only now it’s in hyperdrive.

St. Louis hasn’t enjoyed that same margin of victory (3.00 GPG, 2.53 GAPG) because it’s more interested in the long game. Obviously, it would rather spend its time peppering goaltenders in tight, but it isn’t going to overextend in its pursuit of quality opportunities. It’s perfectly happy cycling the puck down low, firing shots from the point and flooding the trenches. Rinsing and repeating this process is not easy…but it’s proven much more difficult for opponents to deal with.

Despite mediocre possession numbers (50.9 CF%, 49.9 SCF%, 46.7 HDCF%), they’ve posted a terrific 57.7% goal share at 5-on-5. They don’t need to own the majority of shots or chances. They just need to drag their opponents into deep enough water to eventually drown them.

One by one, the Jets, Stars and Sharks have watched close series slip through their fingers because the Blues embraced the grind.

While St. Louis is greater than the sum of its parts, it doesn’t hurt that key forwards Vladimir Tarasenko and Ryan O’Reilly rose to the occasion late in Round 3. Their return to form represents a boon to an offense that was thriving on the back of Jaden Schwartz, a wonderful bottom six and Alex Pietrangelo and Colton Parayko sneaking their bids through traffic.

Balance up front will be crucial against a team that deploys the single best two-way line in the world. Moreover, the Blues must hold their own at even strength because the Bruins carry a distinct advantage on special teams (34.0 PP% and 86.3 PK% vs. 19.4 PP% and 78.0 PK%).

Of course, rookie netminder Jordan Binnington (2.36 GAA, 91.4 SV%) is a huge wild card as well. The 25-year-old has never been on this stage and may well fold under the pressure of the moment. His performance will be compared to Rask’s throughout this series, and the latter is the Conn Smythe Trophy front-runner at the moment. The Bruins are also a very opportunistic club. Binnington may feel great about his game, but at any given moment, Boston can strike for two or three goals out of nowhere. Maintaining his composure amid this storm will be vital.

Thankfully, the Blues have done just that throughout the spring tournament. They never get too high or too low because they understand that their path to victory is a long and winding road. Nothing will come easily. With one hurdle left to clear, they’ll be intent on confirming that slow and steady does in fact win the race.

The burning question now is whether Boston will let it get that far.