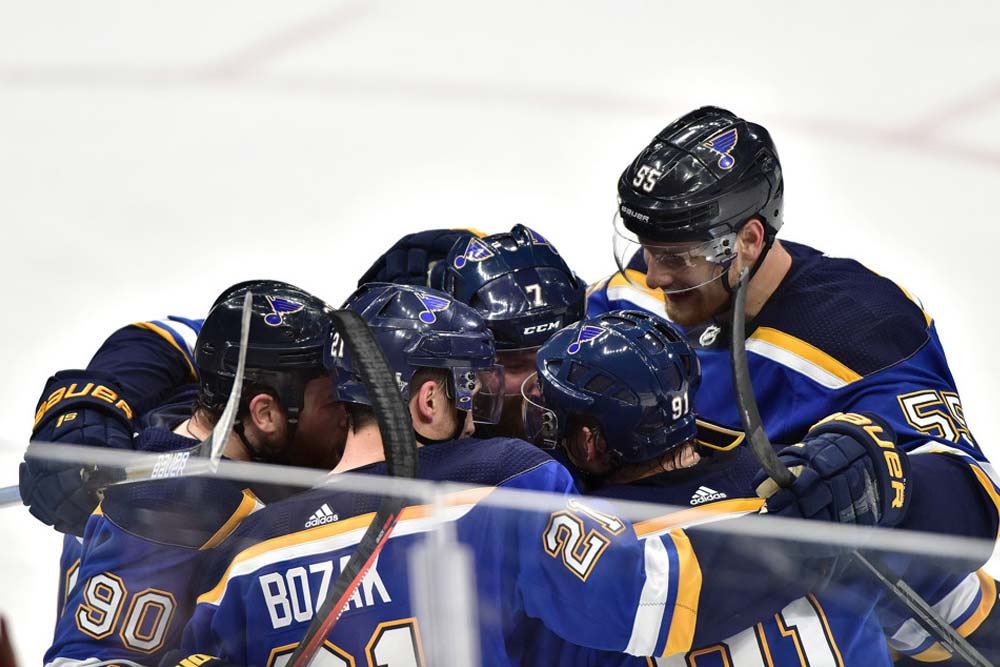 With a 5-1 win in Game 6 of the Western Conference Final, the St. Louis Blues eliminated the San Jose Sharks and will face the Boston Bruins for the right to lift Lord Stanley’s Cup.

Their performance on Tuesday wasn’t pretty by any means, though. San Jose controlled 56.7% of the shot attempts at 5-on-5 in the opening frame, as Craig Berube’s men committed a number of giveaways early and were often caught out of position. Despite holding a 2-0 advantage entering the second period, they hadn’t played even remotely well. In fact, they had made the one mistake you must avoid against the Sharks: trading chances with them. That’s exactly how San Jose cut its deficit in half. Patrick Maroon couldn’t beat Martin Jones on an odd-man rush and the Sharks instantly converted that miss into a partial breakaway. 22-year-old rookie Dylan Gambrell whistled a shot past Jordan Binnington to pull his team within striking distance.

What a time to get your first ever goal in the NHL. Congrats, @D_Gambrell7! 👏 #PlayoffMode pic.twitter.com/GVfMYYW30A

Maybe the Blues were taking their opponents lightly. After all, the Sharks looked deflated over the past couple of games and were missing Erik Karlsson (groin), Tomas Hertl (upper body) and Joe Pavelski (upper body). San Jose was already struggling to generate offense with those three in the lineup. This should be a cakewalk without them, right?

Thankfully, St. Louis didn’t entertain those thoughts for too long. With a 3-1 cushion in the third period, it dialed into shutdown mode. Sure, the Sharks enjoyed a comfortable edge in puck possession, but the majority of the shots came from the outside with very little net-front presence. Binnington was consistently allowed to square up and smother any bids that came his way. A few scares are inevitable when you shell up, but the outcome was never in question.

And that was the story of this series.

“The referees cannot call what they didn’t see.”

A hand pass, unseen by the referees, gifted the San Jose Sharks the overtime game winner in Game 3 over the St. Louis Blues.

Every time St. Louis could have taken its eyes off the prize, its poise and character shone through. Remember Timo Meier’s infamous hand pass? That felt like a clear turning point at the time, and it was…only it ultimately benefited the Blues. Rather than crying foul and looking for an easy way out, they dug their heels in and used that injustice to fuel their fire. They emerged with enough focus and energy to defeat both the Sharks and the officials if necessary. That appeared to surprise San Jose, which took its foot off the gas pedal as St. Louis went into overdrive. The Blues rattled off three straight wins, including two blowouts once it was clear there was no fight left in San Jose.

Karlsson’s overtime winner in Game 3 wasn’t your average case of poor officiating either. The entire hockey world was up in arms over it, so you could have forgiven the Blues for losing their cool, but that brutal non-call appeared to steady Berube’s troops.

In between the pipes, Binnington was surely disappointed in his first three games of Round 3 (3.93 GAA, 85.4 SV%). The 25-year-old breakout star wasn’t tracking the puck well and appeared uncomfortable in his crease. He didn’t let that get him down, of course. Against St. Louis’ most potent opponent yet, he shut the door when it counted with the sort of quiet showings that inspire confidence in your teammates. While he didn’t quite steal the series, he posted a 0.67 GAA and 97.4 SV% over the final three games to close out the Sharks.

Up front, Vladimir Tarasenko struggled through the conference quarterfinals and semifinals, registering just five points in 13 games. Only one of those came at even strength. In a more open stylistic matchup, he reminded the league of his world-class talent (8 points in 6 games) and took over a few games with his blend of speed, strength and skill. Alongside Jaden Schwartz (5 points in 6 games) and Brayden Schenn (3 points in 6 games), the Russian sniper helped the Blues own 53.2% of the scoring chances and 56.0% of the high-danger opportunities in the series.

Ryan O’Reilly made some progress as well. The two-way center’s underlying numbers were still poor against the Sharks (43.3 SCF%, 41.7 HDCF%), but in a tournament format, he rebounded where it matters most: the scoreboard. He potted five points in six games and St. Louis was able to bend without breaking during his shifts. At 5-on-5, the veteran was on the ice for five goals for and zero against throughout the series.

That success in the trenches reflects the Blues’ approach in the latter stages of Round 3. They didn’t dictate the play in every phase of every game, but they dominated the slot, racking up an 80% share of the goals off scoring chances and 100% of the goals off high-danger bids.

In the area where games are won and lost, where commitment and execution are paramount, they found their groove and refused to relinquish it.

The Sharks, who were likely expecting St. Louis to roll over after Game 3’s controversial finish, watched their own wheels come off. They were usually the opportunists, but St. Louis’ reinvigorated drive saw the team capitalize on each San Jose gaffe — and Peter DeBoer’s group is always generous. So they grew timid. They grew scared of pressing the action. They were still flinging a good volume of shots at Binnington, but they weren’t truly attacking. The feverish pace, the incisive passing, the dazzling rushes from the back end. They all vanished.

San Jose eventually tried to weather the storm when it should have embraced it. As a result, it scored a measly two goals while conceding 12 in the final three games.

The 2018-19 Blues feel different. They didn’t let adversity sink their season. They rallied around it and have now reached heights they haven’t seen in nearly 50 years. When most teams would have flown off the rails, they displayed a remarkable ability to hunker down and stay the course.