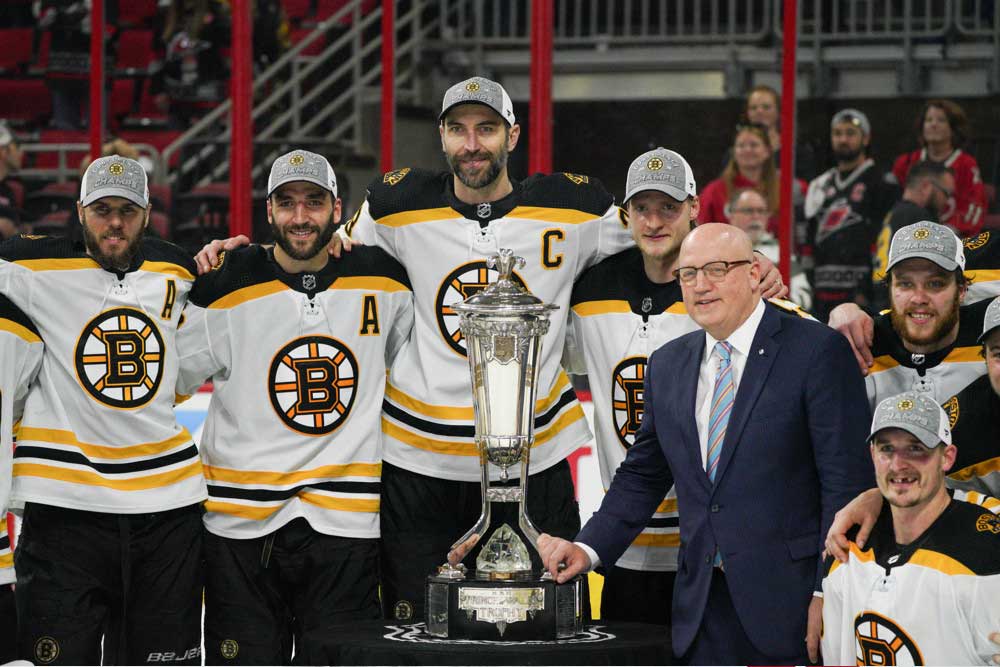 Shortly before puck drop for Game 4 of the Eastern Conference Final, the Boston Bruins announced that captain Zdeno Chara (undisclosed injury) would not be available. Once the contest began, Curtis McElhinney came up with a few massive stops early and the Bruins squandered a couple of chances by attempting one too many passes. Carolina Hurricanes captain Justin Williams finally seemed more focused on playing hockey than engaging in shenanigans. Rod Brind’Amour’s club also rediscovered its prowess in possession by controlling 57.4% of the shot attempts at 5-on-5.

The conditions were ripe for the Hurricanes to right the ship, but none of them mattered in the end. The Bruins completed the sweep with a cushy 4-0 win.

Much like Carolina did to its two previous opponents, Boston merely outwaited the Canes and struck once the right window presented itself. In this case, Carolina was called for too many men on the ice in the second frame. 18 seconds later, David Pastrnak got inside leverage on Calvin de Haan and tucked home Brad Marchand’s pass for the series-winning goal. That type of soft defense from a usually reliable blue line suggested there was no resistance left.

In fairness, De Haan will reportedly need shoulder surgery, but the point extends to the rest of the squad. If the Canes were going to challenge Boston’s fortitude coming into this matchup, the opposite was true as well. Each fruitless shift, each quality shot devoured by Tuukka Rask, each power play goal against took its toll until the Bruins broke Carolina’s will. Prior to the third round, it had yet to encounter a team that could match its level of composure. In the end, the Bruins’ poise and opportunistic attack made light work of a team that looked the part of a legitimate contender only one week ago.

Their performance in Game 4 was just the latest in a line of masterful showings.

With Carolina’s fate hanging in the balance, Bruce Cassidy’s troops locked down the middle of the ice and dared the Hurricanes to beat them from the perimeter. Any time Carolina came too close for comfort, the Bruins stiffened up and pushed the action back to a less threatening area. They rinsed and repeated this process knowing full well that their opponents would commit errors out of desperation. They let the goals come to them.

Down 2-0 in the third period, Hurricanes defenseman Jaccob Slavin forced the issue by trying to thread a pass through Patrice Bergeron. That…didn’t turn out well. The puck caromed to Pastrnak, who snuck a pass to Bergeron for the 3-0 cherry on top.

That goal encapsulated this series: An impotent Hurricanes group regularly ditched its structure to generate offense, and Boston took advantage of the holes that were created. The Bruins knew they possessed a more lethal attack. They wouldn’t have to work as hard to get on the scoreboard, so they were content to let Carolina own the puck on the outside as long as they dominated the slot.

And did they ever.

Over these four games, Boston demonstrated its unquestionable superiority in the trenches: Carolina owned 53.8% of the shot attempts but just 47.9% of the scoring chances and 38.3% of the high-danger bids in all situations. The Bruins built a fortress around Rask with active sticks, defensemen boxing out and forwards stuffing the shooting lanes, which resulted in six total goals against and just one from the scoring areas. By comparison, Boston netted 11 high-danger goals during the series.

No team is perfect, of course. On the rare occasions when a chance did slip through the cracks, Rask (1.25 GAA, 95.6 SV% in Round 3) was there to eliminate the threat with the greatest of ease. The 32-year-old has chosen the perfect time to play the best hockey of his career.

The Hurricanes had no answers because the key to beating the Bruins is pure skill. Toronto gave them the toughest test so far mostly because Auston Matthews (5 goals in 7 games) is an absolute monster. Since then, Boston’s opponents haven’t featured the same level of talent. Columbus and Carolina have stronger fundamentals than the Leafs, but their lack of game-breakers plays directly into the Bruins’ strengths.

Sebastian Aho and Andrei Svechnikov certainly boast the upside to get there one day, but they weren’t ready to slice defenses open this year. In essence, Carolina was faced with a Catch-22: It couldn’t truly threaten Boston without abandoning what made it so successful to begin with.

This series was a game of chicken to see who would bail for a shortcut first, and the Bruins’ higher-end roster and brilliant special teams (1st in PP%, 4th in PK%) allowed them to stay the course without a worry in the world. Even though they couldn’t ice Charlie McAvoy in Game 1 (suspension) or Chara in Game 4 (injury), they were in no hurry whatsoever. Conversely, the Hurricanes were fighting an uphill battle from the start. They began playing far too fast, forcing passes and making rash decisions they would have never considered against a different foe.

Boston turned the tables on Carolina, biding its time until panic set in on the other side. Every time the Hurricanes took a risk, the Bruins converted it into an odd-man rush or a power play opportunity. Then they promptly returned to their stance, rolling with any punches until they could land a knockout blow of their own. They all got in on the action too. Though Bergeron, Marchand and Pastrnak led the team in scoring, a quick look at the stats indicates a team with much more depth than it gets credit for. Trading for Charlie Coyle and Marcus Johansson has paid off. David Krejci and Torey Krug are always solid contributors. Even Sean Kuraly and Chris Wagner provided some key offense on the fourth line. Only three Bruins failed to register a point in the series — and two of those suited up for one contest.

That patience, that steadiness on the back end, that ability to generate turnovers on the forecheck, that next-man-up attitude, that unflinching belief…those were the Hurricanes’ hallmarks in the first two rounds.

In Round 3, they just couldn’t handle a taste of their own medicine.