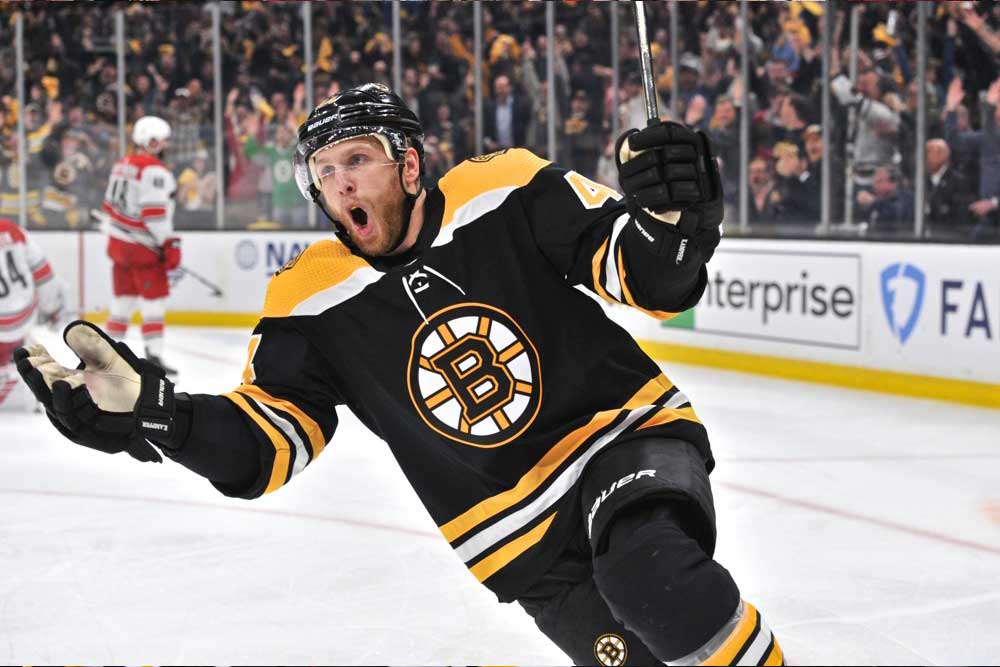 The Carolina Hurricanes, who finished as the second wild card team in the Eastern Conference this season have just begun jousting with the Boston Bruins who placed second in the Atlantic Division and Eastern Conference. The seven-game set got underway on May 9th with the Bruins scoring two power-play goals in 28 seconds to erase a 2-1 third-period deficit to win the opener 5-2.

The Hurricanes came back from a 3-2 series deficit against the Washington Capitals to take them out in seven games and then swept the New York Islanders in four. As usual, the Bruins went the full seven games before taking care of the Toronto Maple Leafs and then bounced the Columbus Blue Jackets in six. Carolina and Boston met in the playoffs in 2008/09 when the Hurricanes last made the postseason with Carolina winning in seven games.

As far as momentum goes, Carolina has been victorious in 11 of their past 13 postseason series overall, but that dates back to the 2001/02 campaign. Recently though, they had won won six straight games in this year’s postseason and seven of the past eight until losing to Boston in game one. They’re also 5-0 at home with 22 goals for and seven against. The Bruins have now won four consecutive contests with their game one triumph.

Boston went 49-24-9 in the regular season for 107 points to earn home-ice advantage while Carolina was 46-29-7 for 99 points. Carolina netted 2.96 goals per game and allowed 2.70 against with Boston averaging 3.13 goals for and 2.59 against during the season. The Bruins had the better power-play at 25.9 per cent to 17.8 per cent but Carolina’s penalty killing was better at 81.6 per cent to 79.9 per cent. The teams met three times in the regular season with Boston winning 3-2 at home and 4-3 in overtime at home while Carolina were 5-3 winners on their home rink.

Carolina is 8-4 in the playoffs so far with Boston at 9-5. Carolina has scored 3.00 goals per game and conceded 2.50 with Boston netting 3.21 times per night and allowing 2.14 against. However, if this series is decided by special teams then the Hurricanes may be in trouble since their power-play is operating at just 12.2 per cent in the postseason with their penalty killing at 73.3 per cent. Boston’s gone a league-best 30.0 per cent with the man advantage and has killed off 82.5 per cent of their penalties. The Bruins also have the edge in the faceoff circles by winning 53.1 per cent of their draws compared to Carolina’s 50.0.

Curtis McElhinney and Petr Mrazek with the former taking over in net when Mrazek was injured against the Islanders in game two of their series. Mrazek’s recovered now head coach Rod Brind’Amour started him in game one.

It’s scoreless after one in Brooklyn on @NBCSN. pic.twitter.com/KVcSYycL80

The Bruins may have the edge in the crease though as Tuukka Rask has a goals-against average of 2.02 and 93.8 save percentage in this year’s playoffs and has gotten better with each passing game. He posted a 1.83 GAA against Columbus with a 94.8 save percentage.

The Hurricanes definitely need to keep the lid on David Pastrnak, Patrice Bergeron and Brad Marchand regardless if they play as a trio or on separate lines. Marchand has five goals and a league-high 15 points in 14 playoff games while Pastrnak has six markers and 11 points and Bergeron has chipped in with six goals and nine  points. Charlie Coyle has also helped out with six goals and nine points while David Krejci has four goals and 11 points. Torey Krug is the top blue liner with a goal and seven helpers.

Boston needs to keep an eye on blue liner Jaccob Slavin as he leads the Hurricanes with 11 points, all assists. Rookie Andrei Svechnikov has returned from a concussion received against Washington and has posted five points in his six postseason contests. Jordan Staal has four goals and six assists, Sebastian Aho has five goals and five assists, rookie Warren Foegele has five goals and four assists, Teuvo Teravainen has netted six goals and three helpers and rearguard Dougie Hamilton has racked up three goals and seven points.

Injuries: Boston blue liners Kevan Miller and John Moore are currently sidelined along with Noel Acciari while Carolina rearguard Trevor van Riemsdyk is out for the season.

The San Jose vs St. Louis Blues showdown gets underway this Saturday May 11th with the Sharks having home-ice advantage. It should be interesting if it comes down to seven games since the Sharks have gone 6-2 at home so far while the Blues are 5-1 away from home. San Jose has gone the distance in both rounds so far. They got past the Vegas Golden Knights in overtime of game seven after trailing 3-1 in the series and 4-1 with just over 10 minutes remaining in the third period of the decider. They then edged past the Colorado Avalanche in seven games.

The Blues eliminated the Winnipeg Jets in six games in the first round and then squeaked past the Dallas Stars in double overtime of game seven in their second series. The Sharks finished in second place in the Pacific Division this season at 46-27-9 for 101 points while the Blues took third spot in the Central with a mark of 45-28-9 for 99 points. The teams met three times during the regular season with San Jose winning 4-0 and 3-2 in overtime at home and St. Louis winning 4-0 at home. The teams have met five previous times in the postseason with San Jose winning three series. The last meeting was 2015/16 with San Jose winning in six games.

San Jose’s power-play was 23.7 per cent in the regular season with the Blues at 21.1. The Blues had slightly better penalty killing at an 81.5 per cent success rate compared to San Jose’s 80.8. San Jose scored 3.52 goals per game in the regular-season and allowed 3.15 while the Blues notched 2.98 per game and conceded 2.67. In the postseason, San Jose has scored and allowed 3.07 goals per game with St. Louis scoring 2.62 and conceding 2.54. The Sharks have the edge in special teams as their power-play is 18.5 per cent and their penalty killing 80.8 per cent compared to the Blues’ 17.1 and 75 per cent respectively.

San Jose captain Joe Pavelski returned to the lineup from injury in game seven against Colorado and picked up a goal and assist. Forwards Logan Couture and Tomas Hertl both have nine goals to lead the league in the playoffs and each has 14 points as does blue line teammate Brent Burns who has five goals and nine assists. Sharks’ defender Erik Karlsson leads the squad with 12 assists and forward Timo Meir has notched three goals and 10 points.

Logan Couture gets the WCF started with his 10th of the playoffs! 🚨

For the Blues, Jaden Schwartz is hot with eight goals and a pair of game winners after scoring just 11 times during the regular season. Fellow forwards Vladimir Tarasenko has five goals, Ryan O’Reilly has chipped in with two goals and nine points and Patrick Maroon has contributed three goals with two of them being game winners. Blue liner and team captain Alex Pietrangelo has nine assists to lead the team and has also chipped in with a pair of goals.

Goaltender Martin Jones of San Jose has been playing to his potential after struggling early in the series against Vegas. He has a goals-against average of 2.13 with a 92.8 save percentage while Aaron Dell played in two games in relief against Vegas and saved just 21 of 36 shots. Blues’ rookie Jordan Binnington, who’s a finalist for the Calder Trophy, has gone all the way in net for the Blues with a GAA of 2.39 GAA and a save percentage of 91.5. San Jose is 7-0 in the postseason and 39-0 in 2018/19 when allowing two or fewer goals against.