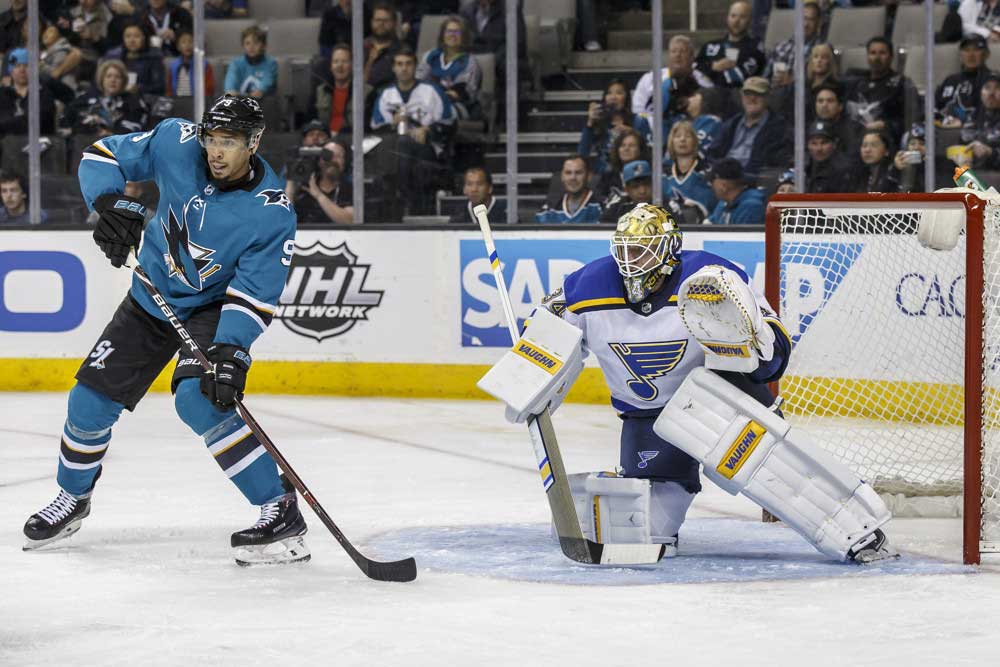 The San Jose Sharks are a serious Stanley Cup threat. Make no mistake, though: They haven’t played all that well this spring. Peter DeBoer’s club is the favorite in the Western Conference Final because it may ice the most balanced offense in the league. Two of the top three scorers in the postseason, Tomas Hertl and Logan Couture, play on separate lines and enjoy a wealth of support. Joe Thornton and Kevin Labanc fuel a solid third unit that can be deployed in any situation. Meanwhile, opponents must face either Brent Burns or Erik Karlsson — sometimes both — for roughly 40 minutes per night.

With its depth and twin terrors on the back end, San Jose can manufacture chances that others teams simply can’t.

However, the Sharks’ uncanny ability to create something out of nothing is a double-edged sword. After all, there’s a reason nothing was nothing to begin with. Sometimes, the juice isn’t worth the squeeze and their insistence on pushing forward nonetheless comes back to bite them. In their efforts to unlock defenses, they occasionally force passes through tight seams or wander out of position.

This isn’t a matter of young guns trying to do too much either. From the kids to the grizzled veterans, every impact player on the team is guilty of committing the odd turnover at the offensive blue line or drifting to the wrong side of the puck. Even Hertl, who’s emerged as a three-zone star in the postseason, has his overzealous moments.

Frankly, that’s what makes them such a thrilling team to watch. Whether it’s a dazzling bit of finesse or a monumental gaffe, absolutely anything can happen in the blink of an eye. They hang on to the puck for longer than expected, they often attempt the extra pass when a perfectly good shot is available and they don’t hesitate to barrel up the ice when caution is seemingly in order. That brazen attitude has made the Sharks the most entertaining squad in the tournament.

Through two rounds, this fan-friendly approach has paid off…just barely. They squeaked by the Vegas Golden Knights in seven games and took another seven to dispose of the top-heavy Colorado Avalanche. At 5-on-5, San Jose is controlling 49.6% of the shot attempts (11th), 49.0% of the scoring chances (12th) and 44.8% of the high-danger opportunities (14th). Naturally, you might be wondering how the Sharks have succeeded at even strength. Well, they haven’t really. Their expected goal share of 45.9% (14th) is only slightly exceeded by their actual 47.2 GF% (8th). Overall, they’ve scored 43 goals and allowed 43 goals. This high-wire act could result in disaster against the disciplined St. Louis Blues in Round 3.

On the flip side, it hasn’t taken them this far by accident. San Jose knows how to score opportune goals. It can smell them in the air and activates a furious wave of attackers in high-leverage situations.

Starting netminder Martin Jones also rebounded from a poor first round (3.20 GAA, 90.4 SV%) with a good showing in the conference semifinals (2.29 GAA, 91.6 SV%). He wasn’t spectacular by any stretch, but his team doesn’t need him to be. Average play between the pipes is enough when you can unleash a potent offense.

Hertl is among the league’s best at fending off defenders in close quarters and bulling his way to the net. Meier is a wrecking ball whose speed consistently catches defenders off guard. Couture is a playoff performer with ice in his veins. Captain Joe Pavelski was heroic in his Game 7 return from injury. His craftiness and hands in tight are world-class. Then there’s Evander Kane’s quick trigger, Thornton’s ridiculous vision, Labanc’s sporadic moments of brilliance, and Burns and Karlsson’s mad dashes up the ice.

Yeah, that’s a lot of weaponry for the Blues to account for. They will indeed have their hands full, but they defied expectations in the regular season and boast a fundamentally sound roster. It may not rival San Jose’s firepower, but it’s better suited for a grind-it-out battle. Actually, that’s the real battle: Can St. Louis dictate the style of the series?

The Sharks love to run and gun. Considering their arsenal of talent, why wouldn’t they? But when they’re forced to dig deep and muck it up in the trenches, it’s a different story entirely.

Craig Berube has the personnel to impose that tempo. Though Vladimir Tarasenko (5 points in 13 games) and Brayden Schenn (4 points in 13 games) have disappointed on the offensive end, they’re strong on the puck down low. Jaden Schwartz is a quick and elusive winger who uses his edges well to create separation from defenders. The third line of Tyler Bozak, Robert Thomas and Patrick Maroon has been a revelation (53.2 CF%, 55.7 SCF%, 56.1 HDCF%), consistently extending plays on the cycle and creating open space by wearing their opponents down. Maroon has apparently found the Midas Touch as well, potting a pair of game-winners — including the series-clincher — against the Dallas Stars.

There are some concerns, though. Two-way center Ryan O’Reilly hasn’t been his normal self in the playoffs. His control over proceedings has greatly diminished, as he’s put up a 43.1 HDCF% and 45.9 xGF%. He’s still skating and handling the puck well, but he hasn’t found a way to replicate his usual impact. In a complete 180 from the regular season, the team is now performing better across virtually every metric when he’s on the bench. Life won’t get any easier against the likes of Hertl and Couture.

Meanwhile, Colton Parayko and Jay Bouwmeester have struggled as the Blues’ shutdown pair: 47.9 CF%, 44.2 SCF%, 36.6 HDCF%. The closer the play gets to the scoring areas, the worse they fare.

That contrast is actually a reflection of the team’s overall performance: St. Louis owns 52.6% of all shot attempts (6th) but a shockingly low 43.8% of the high-danger looks (14th). That won’t fly in the third round because San Jose doesn’t require many golden opportunities to capitalize on.

Assuming O’Reilly and Parayko can recover to some degree, St. Louis does have the pieces to counter the Sharks. While the Blues have trouble getting to the scoring areas — they’re dead last in HDCF60 — their Western Conference Final opponents are quite generous defensively. Of the 50 defensemen who have played 150 minutes in all situations this spring, no one has conceded goals at a higher rate than Karlsson. San Jose has three other blueliners among the top 11. This is a daring, dynamic and mistake-prone group, and the Blues can expose its ugly side by maintaining their structure and waiting for ill-timed pinches or giveaways.

That patience under fire has already produced a 5-1 road record, so the formula is there.

When the Sharks are involved, offense is ripe for the picking. Through two rounds, they’ve scored and allowed an average of 3.07 goals per game. They’re riverboat gamblers at heart, and if St. Louis can stay composed, San Jose could become its own worst enemy.