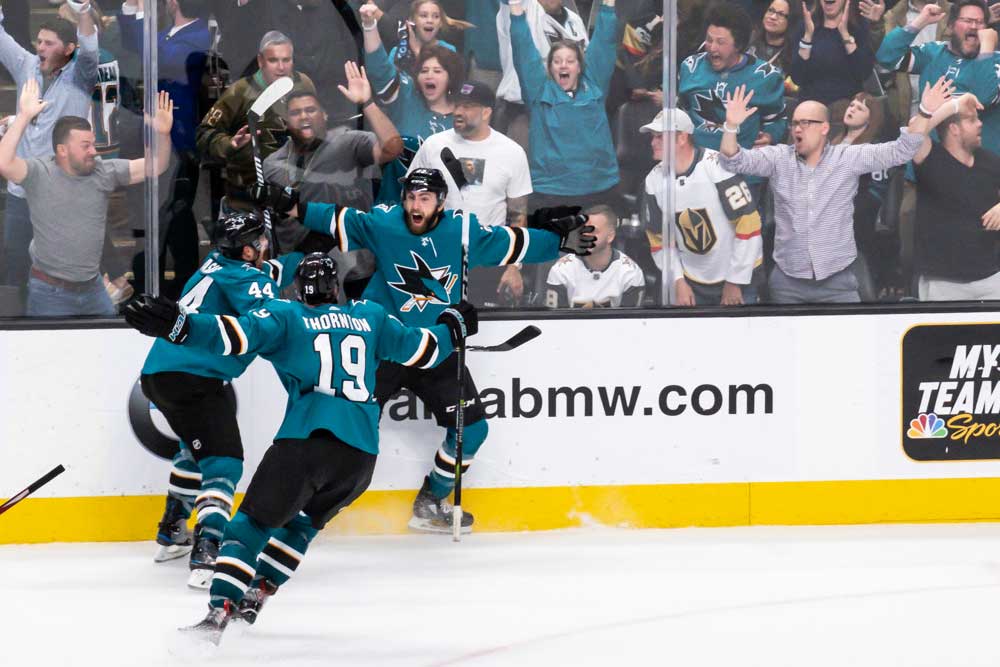 The San Jose Sharks vs Vegas Golden Knights turned out to be the most unpredictable predictable first round series of the NHL playoffs. Many fans and experts felt it was a coin toss and would likely go the full seven games with San Jose perhaps having the edge due to home ice advantage. Going the distance wasn’t surprising, but nobody could have predicted the way the series and its finale played out.

The Sharks stormed back from a 3-0 deficit in game seven with just 10:40 to play and eventually won it 5-4 with 1:41 to go in overtime. What took place in the third period and extra session was unprecedented even for the NHL.

This was the latest and 173rd instalment of game-seven in league history with the Sharks having a slight historical edge since 58 per cent of previous encounters were won by the home team. On the other hand, 129 of those games were won by the team which scored first. Fans knew how important the first goal was in this series since all six contests were won by the team that opened the scoring.

The edge suddenly shifted Vegas’ way since they not only scored the first goal of the game they scored the first three. They led 3-0 at the 3:36 mark of the third period when Max Pacioretty beat Sharks’ netminder Martin Jones with his fifth goal of the series. Some fans felt the Sharks were harpooned at this point and will forever regret leaving the building to beat the traffic.

The game changed dramatically at the 9:13 mark of the third when Cody Eakin was handed a five-minute major, a misconduct, and thrown out of the game for cross-checking the Sharks’ Joe Pavelski. The San Jose captain was also hit by Paul Stastny as he was falling awkwardly and was bleeding heavily when his head made contact with the ice. Pavelski was helped off and didn’t return.

A scary moment in San Jose as Joe Pavelski leaves the game after hitting his head on the ice. #StanleyCup pic.twitter.com/tR9Xn4PFjo

Whether or not the right call was made is arguable, but the Sharks’ Logan Couture scored his fifth goal of the series just seven seconds later to narrow the gap to 3-1 and give them some hope. Thomas Hertl notched his sixth goal 49 seconds later to make it 3-2 and Couture added his second of the game two minutes and 40 seconds after that to tie things 3-3. The Sharks feeding frenzy wasn’t finished there however as Kevin Labanc scored just 28 seconds later to give them a 4-3 lead.

The Sharks Game 7 comeback was EPIC 🤯

After going 0-for-4 with the man advantage earlier in the game, San Jose blew four goals past Marc-Andre Fleury in the span of four minutes and one second. It was the third time in NHL history a team had scored four times on a five-minute power-play and the first time in the playoffs. Labanc registered a goal and three assists on the four goals to tie a postseason mark of four points in a period.

What followed for the remaining six minutes minutes and 19 seconds of the third period was some of the most exhilarating hockey ever witnessed. Both teams went toe-to-toe and produced several excellent scoring chances only to be thwarted by Jones and Fleury. The Golden Knights managed to pull Fleury for an extra attacker and Jonathan Marchessault beat Jones on the short side from in close at 19:13 to make it 4-4. Both teams had a chance to win the game and series in the final 47 seconds, but the affair was destined for overtime.

The extra session was just as frantic with each side trading chances and saves until Barclay Goodrow jumped onto the ice for just his second shift of overtime. He took a pass from Erik Karlsson and cut in from the right wing to beat Fleury with a deke at 18:19 and send the Shark Tank into a state of euphoria.

Couture led San Jose in the series with six goals, Karlsson had nine assists and also led the squad in points. Mark Stone’s six goals and 12 points led Vegas while Shea Theodore topped the team in assists with seven. Fleury posted a goals-against average of 2.70 with a 90.9 save percentage and a shutout. Jones had a 90.4 save percentage and a 3.20 GAA.

Jones struggled to start the series as he stopped just 67 of 80 shots in the first four games and was pulled in games two and four and replaced by Aron Dell. He also allowed several early goals to put his team behind. He then caught fire by allowing just seven goals on 129 shots with his team facing elimination in the next three games for a save percentage of 94.6. Jones’ 58 stops in game five were a franchise win and he followed up with 34 saves in the deciding contest.

San Jose won game one at home 5-2 and fell 5-3 in game two. Vegas dominated in their rink by outscoring the Sharks 11-3 with 6-3 and 5-0 victories. The series appeared to be all over at this point, but the Sharks won game five at home 5-2 and then edged the Golden Knights 2-1 on the road with a shorthanded goal from Hertl in double overtime in game six.

Couture and Hertl scored four goals each in the last three games of the series to propel the comeback and the San Jose penalty-killing improved dramatically. They conceded eight times on 24 power-plays in the first five games and then went five for five in the final two outings. The Sharks also managed to contain Vegas’ top line of Pacioretty, Stastny and Stone as the series went on. The trio combined for 12 goals and 28 points in the first four contests and went pointless in games five and six. They then managed three points in game seven.

The San Jose comeback triumph in game seven was just the second time a team erased a three-goal deficit in the third period of a playoff game to win. The Boston Bruins were the first to pull it off in 2012/13 when they stormed back from 4-1 to beat the Toronto Maple Leafs 5-4 in overtime. The Leafs blew their lead with 10:42 to go in the game while the Golden Knights collapsed in the final 10:40.