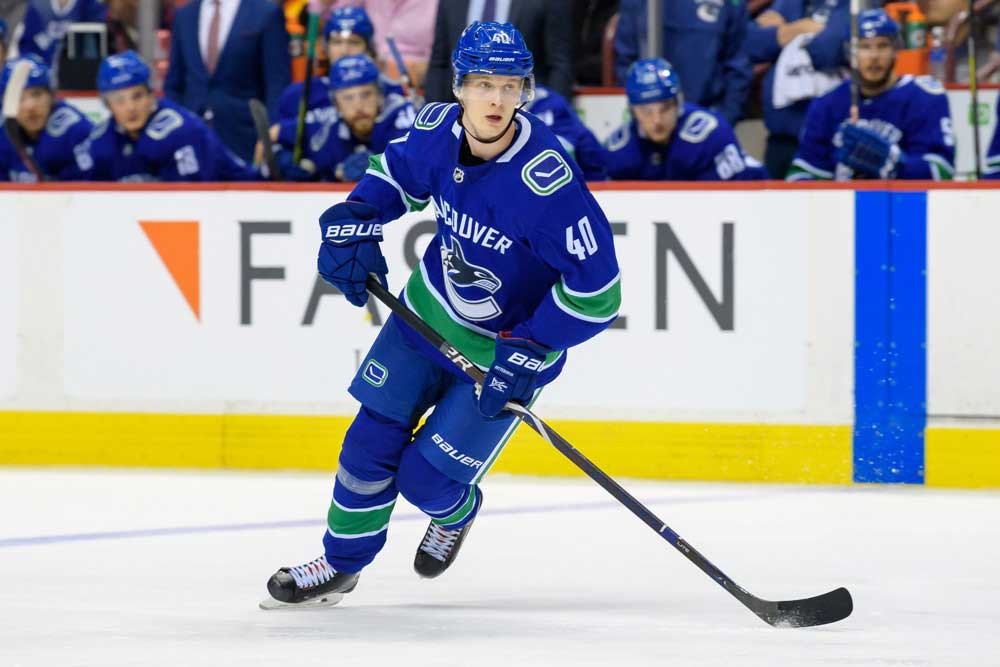 They haven’t been dominant in any way and their goals-against average isn’t very pretty, but the Vancouver Canucks reached the quarter mark of their season in somewhat surprising fashion. The west coast Canadian outfit sat in second place in a tight Pacific Division after 21 games with 22 points and were just one point back of the table-topping San Jose Sharks. Not to rain on their parade, but they had also lost four straight games and were just five points ahead of the seventh-place Vegas Golden Knights in the eight-team division. Still, according to most NHL experts, the Canucks have done a lot better than expected especially with ace sniper Brock Boeser on the sidelines for several games due to injury.

For most fans, the main reason for the Canucks’ decent showing has been the performance of  rookie forward Elias Pettersson, who just turned all of 20 years old. Pettersson flew out of the starting blocks with 10 goals under his belt in his first 10 NHL games and had 17 points after 15 games. You’re probably wondering why Pettersson has suited up for just 15 of the team’s first 21 games though. That’s because he missed half a dozen contests with a concussion after being drilled into the boards and slammed to the ice by Mike Matheson of the Florida Panthers in mid-October. Petterson’s back now and fortunately isn’t showing any ill effects from the incident.

Scoring 10 goals in his first 10 outings was quite an achievement as Pettersson became just the fifth player in league history to do it and the first since the 1992/93 campaign. The Canucks are obviously glad to have him back and the Swedish youngster has taken over from where two of his fellow countrymen left off as the Sedin twins Daniel and Henrik retired at the end of last season. Pettersson’s goal now is to help the club return to the postseason for the first time since 2014/15. It’s still going to be an uphill battle, but one that may be conquered once Boeser and his highlight reel goals return to the lineup.

In the meantime, Canucks’ fans will have to be satisfied watching Pettersson brighten up the league with his offensive skills. It’s hard not to be a fan of his and the Great One himself admits this as Wayne Gretzky recently told Vancouver’s Sportsnet Radio that he can’t help but admire the young man. Gretzky stated that he sees a lot of himself in the way Pettersson plays the game and noted, “From my point of view, he’s got a lot of my similarities. His hockey sense and his playmaking ability are as good as anybody right now, and that’s probably where the comparisons come from — much more the playmaking than anything else.”

The NHL’s all-time leading scorer added that he likes Pettersson’s energy and passion and also compared him to Pittsburgh Penguins’ skipper Sidney Crosby. “A guy like Pettersson plays more along the lines of the way Sidney plays and the way I played in that he’s got to utilize his eyes and his hockey sense and rely on his instinct-ability on the ice. He’s not a big guy and Sidney is by no means a big man either. But his hockey sense; Sidney always seemed to be one step ahead of everyone else.”

Gretzky’s right that Pettersson isn’t a big guy. The center may be tall enough at 6-feet-2-inches, but at about 176 lbs he’s going to have to gain a little weight and muscle to help keep guys like Matheson from throwing him around on the ice. Even so, there’s a good chance he goes on to win the Calder Trophy as the NHL’s rookie of the year this season if he can keep it up and stay out of the infirmary. As for leading the Canucks back to the playoffs though, he’ll definitely need some help to pull that off come April. They may not make the promised land, but the team should be a good bet to improve considerably on last year’s total of 73 points.

Their good start definitely helps, but head coach Travis Green is hoping his troops can start to pick up a few more points on the road over the remainder of the season as they recently went 1-5 on a six-game road trip. If their luck away from home doesn’t change soon their playoff chances could quickly sink. They also need players such as Bo Horvat, Loui Eriksson and Jake Virtanen to keep up their inspired play. So far Horvat has been solid in his own end, shown a good touch around the net and has been one of the league’s best faceoff men while averaging more than 20 minutes of ice time per game. Overall, the Canucks had scored 65 goals at the quarter-mark of the season and that wasn’t really expected with the Sedins gone. They were also getting some offense from the blue line to help out through the likes of Ben Hutton and Erik Gudbranson.

Actually, the majority of the roster is playing better than a year ago and it’s quite noticeable with young forwards Nikolay Goldobin and Tyler Motte along with defenders Troy Stecher and Derrick Pouliot. Vancouver has displayed confidence and been successful in one-goal games and has shown the ability to bounce back when their opponents score first, something that was missing last season. However, the Canucks started well last season too by going 14-10-4 before going off the rails. It’s possible the same thing could happen this campaign unless Boeser heals quickly along with several other injured players including Brandon Sutter, Sven Baertschi, Alex Edler, Jay Beagle and backup netminder Anders Nilsson.

Since Nilsson is on the shelf, Green has been relying on Jacob Markstrom between the pipes, but sooner or later he’s going to have to play minor-leaguer Richard Bachman a bit more or run the risk of wearing Markstrom out. There is a bright side to the Canucks season though as the injured players will eventually make their way back to the lineup and the team has already played a good portion of its road contests. The Canucks have endured a pair of six-game road trips in the first quarter of the campaign while spending 28 of 41 days out of town. At some point they’ll be able to unpack their suitcases, get a little rest and pounce on the opportunity to improve on their 5-2 home record.