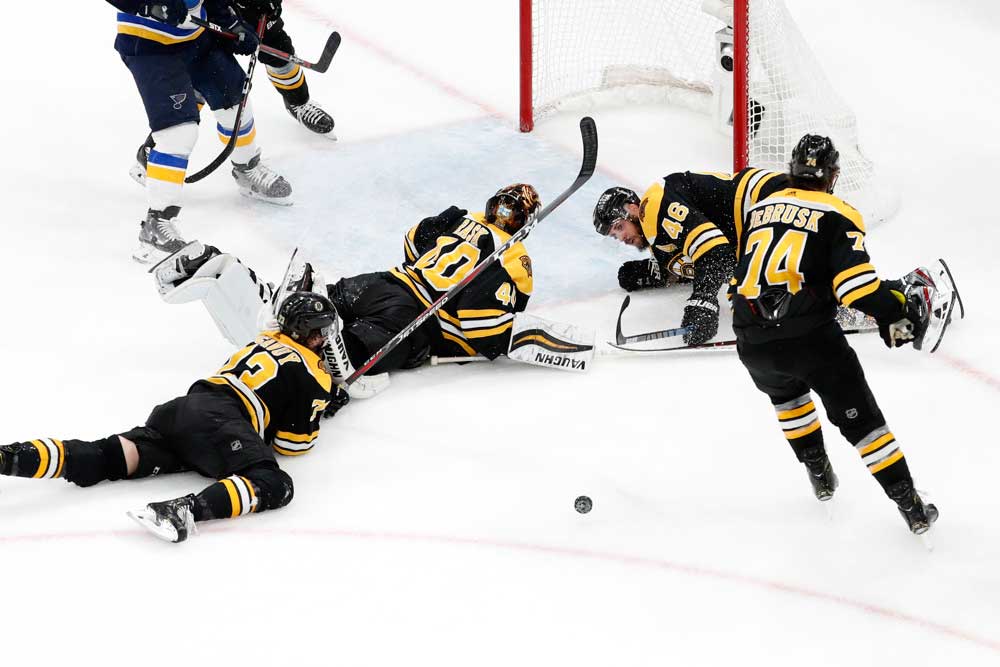 Once again the Boston Bruins’ backs are up against the wall after their 2-1 home loss in game five of the Stanley Cup Final. They were in the same boat back in April when the Toronto Maple Leafs had them by the throat with a 3-2 lead heading back to Toronto. The Bruins fought back to win games six and seven and advance to the second round.

That being said, the St. Louis Blues aren’t the Toronto Maple Leafs. But on the other side of the coin the Blues have played sub-par hockey overall at home in the postseason with a 6-6 record while going 9-3 on the road.

St. Louis will have to do without the services of forward Ivan Barbashev as he’s been suspended for game six for his illegal hit on Bruins’ forward Marcus Johansson in game five even though he didn’t receive a penalty on the play. Boston defenseman Matt Grzelcyk is questionable for game six as he’s in concussion protocol since being injured in game two but captain Zdeno Chara should remain in the lineup though after fracturing his jaw in game four.

To a man the Bruins are saying all the right things to the media regarding their situation and keeping their heads high etc. You need to win four games in the series to win the Stanley Cup not three but deep inside they realize there’s no room for error from now on. Boston’s been in the same situation before as they trailed the Vancouver Canucks 3-2 in 2010/11 and won the last two contests to hoist the cup. However, 72 per cent of teams that lose game five of the Stanley Cup Final go on to lose the series.

St. Louis rode the hot goaltending of rookie netminder Jordan Binnington to win game five as he made 38 saves and won his 15th game of the playoffs while his teammates mustered 21 shots at Tuukka Rask. The 38 saves were the most by a rookie in a final series win and he’s currently tied with four other goalies for most wins by a rookie in a playoff season. Three of those other four went on to win the Stanley Cup that season. The only way Binnington will set a new record this year and get his name in the history books is if the Blues clinch the Stanley Cup with a 16th victory.

Binnington set a new league record for road wins by a rookie in one postseason with his ninth in the game-five win. Ron Hextall of the Philadelphia Flyers went 8-5 in 1986/87 and held the previous mark. With one more win Binnington will tie the record for all goaltenders for road wins as Braden Holtby racked up 10 for the Washington Capitals last season and won the Stanley Cup. Since being pulled in game three when he let in five goals on just 19 shots the 25-year-old Binnington has saved 59 of the 62 shots he’s faced for a save percentage of 95.2.

If the Blues win the Stanley Cup for the first time in franchise history since joining the league in 1967/68 Binnington must be considered one of the favorites to capture the Conn Smythe Trophy as the MVP of the playoffs. He should get some stiff competition from center Ryan O’Reilly who’s now one point behind Boston’s Brad Marchand for the playoff scoring lead with six goals and 14 assists for 20 points.

O’Reilly has three goals and three helpers in the last four games and is getting hot at the right time. With two more points he’ll set a new franchise record for points in a playoff season which is currently held by Brett Hull who tallied 13 goals and eight assists for 21 points in just 12 games in 1989/90. Blues’ captain Alex Pietrangelo has 14 assists in the postseason to set a new club record for a blue liner and he’ll tie center Bernie Federko for the overall record with one more helper as Federko notched 15 in 1981/82.

If the Bruins are going to come back they’ll need to solve Binnington and reignite their power-play which has suddenly gone cold. They scored six times with the man advantage on their first 14 opportunities in the series including going 4 for 4 in game three. However, they’ve gone 0 for 5 in the past two contest. They still lead the way in the playoffs at 33.3 per cent as they’ve connected on 23 of their 69 power plays.

This is the 14th time the Blues have led a playoff series 3-2 and they’ve managed to win the series 11 previous times while losing just twice. It’s also the third time they’ve been up 3-2 this year. Overall, teams which have been up 3-2 in a playoff series have gone 315-87 for a winning mark of 78.4 per cent. This includes an 80 per cent success rate in the Stanley Cup Final by going 32-8.

Teams that have led 3-2 in 2018/19 have gone 5-4 with both Boston and St. Louis fighting back to win a series. The Blues came back to down the Dallas Stars and as mentioned earlier the Bruins did the same to the Maple Leafs. St. Louis seems to get stronger as the series go on as they have a record of 7-1 in games five through seven this postseason while outscoring their opponents 25-10. In addition, they haven’t allowed more than two goals in any of those contests.

Whatever happens, fans should expect a close contest in game six. Four of the five Final games so far have been decided by a lone goal or one goal and an empty-netter with the goalie pulled. The teams have been either tied or separated by just one goal for 254:01 of the 303:51 minutes played or 83.6 per cent of the time.

For St. Louis to win this series in six it means they’re going to have to beat Boston three straight games, which doesn’t happen too often. The Blues have won three straight twice before this playoff season while Boston hasn’t lost three consecutive since back in March.

The only number that matters to both teams now though is one since a St. Louis win will officially end the 2018/19 on-ice NHL season. But let’s not forget the Bruins aren’t too shabby on the road either at 7-3 in the postseason.