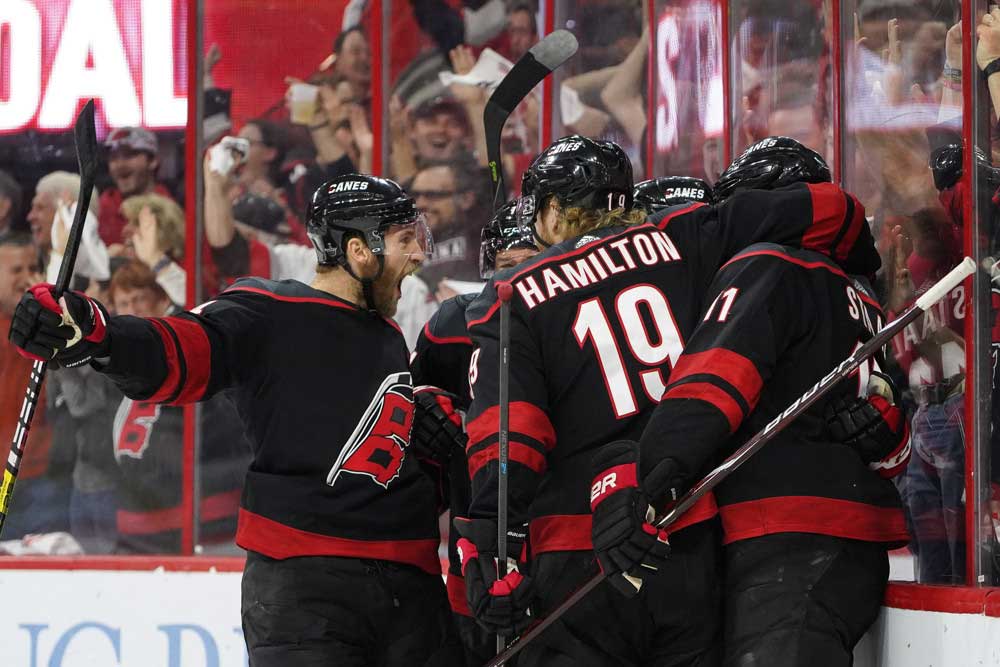 Underdogs are underdogs for a reason. They typically can’t rival the favorite’s talent level and didn’t perform as well in the regular season. However, they can become live dogs in the playoffs through sheer energy and an unwavering commitment to their collective goal.

The Columbus Blue Jackets and New York Islanders already demonstrated the power of these traits in the first round, as they knocked out the Presidents’ Trophy-winning Tampa Bay Lightning and star-laden Pittsburgh Penguins, respectively, this past week. They didn’t merely eliminate them either — they swept them. Though both series looked fairly even early on, Tampa Bay and Pittsburgh’s decided edge in firepower was no match for their opponents’ spirited team play. It all got away from them in a real hurry.

Following a pair of close wins over the Carolina Hurricanes in Games 1 and 2 of their series, the defending champions have dropped two straight contests to a squad that looks as hungry as any in the postseason. Head coach Rod Brind’Amour’s men are on a mission and must have missed the memo that the Capitals were expected to prevail. There’s no question that Washington’s roster is more impressive, but the Hurricanes work significantly harder in all three zones.

Not only is this now a best-of-three battle, but the Hurricanes’ defense of their home ice has created a surge of momentum. There’s a storm brewing, and if the Caps don’t nip this in the bud, they could soon find themselves buried in the rubble.

As if the matchup itself wasn’t challenging enough, the Caps will be without versatile winger TJ Oshie for “quite some time” after he was dumped into the boards by Warren Foegele in Game 4. Washington will surely miss his grit, experience, craftiness and two-way dependability up front. He was also the unsung middle man on the power play, serving as a high-slot shooting option and bumper to relieve the penalty-killing pressure. Moreover, his absence will force another forward into a role he may not be ready for. This isn’t just a top-six spot. It’s a top-six spot in the pressure cooker of the postseason.

Oshie goes down hard at the boards, skates straight to tunnel. #CapsCanes pic.twitter.com/jkkHQGzZuL

On the flip side, Hurricanes blueliner Calvin de Haan returned from an upper-body issue on Thursday to add a welcome dose of depth and steadiness to Carolina’s back end. With his mobility and active stick, he can hold his own against high-quality opponents. As a left-handed shot, he offers Brind’Amour more deployment options too.

This doesn’t bode well for a Caps team that was already struggling to keep pace. Through four games, the Hurricanes are controlling a whopping 61.0% of the shot attempts (1st), 59.2% of the scoring chances (2nd), 61.0% of the high-danger chances (1st) and 64.3% of the goals scored (2nd) at 5-on-5. In other words, Washington ranks near the bottom of the playoff pool in all these metrics. In even simpler terms, Carolina is taking it to the Caps and beginning to overwhelm them with its dominant puck possession.

Todd Reirden’s offense produced 3.34 goals per game (5th) in the regular season. That number has dwindled down to 2.25, which is good for 13th out of the 16 clubs that qualified for the playoffs.

An opportunistic power play may not be enough to topple these Hurricanes. Washington needs to put up more of a fight and impose its will at even strength. Nicklas Backstrom (4 points in 4 games) and Alex Ovechkin (4 points in 4 games) have largely delivered the goods so far, but they need support against a pesky and increasingly confident opponent.

That starts up the middle.

While Evgeny Kuznetsov (3 points in 4 games) and Lars Eller (2 points in 4 games) are producing reasonably well, their overall play has been awful. Washington’s second and third lines concede roughly 65% of the shot attempts, scoring chances and high-danger bids. Sure, Carolina doesn’t necessarily boast a potent attack, but facing that type of volume is bound to catch up to you and leave a mark. Indeed, the Hurricanes’ barrage of shots has generated 3.00 goals per game.

From the Capitals’ perspective, that’s unacceptable. Kuznetsov propelled his team to its first title in franchise history just last season, leading the playoffs in scoring (32 points in 24 games) and slicing up defenses on a consistent basis. Where is that assertiveness now? Where is the dynamic playmaker who could generate chances at will? He’ll need to summon that version of himself in the next few days or Washington may find itself in serious trouble.

As for Eller, his unit alongside Carl Hagelin and Brett Connolly was a force down the stretch and a major reason why Carolina seemed overmatched on paper. However, he’s chasing the play far more often than he is dictating it. His line has been broken up and reunited, which speaks to his inability to get the ball rolling.

On the blue line, John Carlson has floundered without regular partner Michal Kempny (torn hamstring): 38.9 CF%, 37.1 SCF%, 22.7 HDCF%, 33.3 GF%. He still sees the occasional look on offense, but much like the rest of the team, he appears to get caught watching Carolina’s blitz instead of actively working to slow it down or counter it. Veterans Matt Niskanen and Dmitry Orlov have carried their lackluster regular season into the playoffs too, which obviously does little to shore up the back end.

Backstrom and Ovechkin cannot be the lone Capitals standing their ground. The Hurricanes are relentless and their belief continues to swell with every passing shift. It only grew further in the waning minutes of Game 4, when a misread by Justin Faulk forced Petr Mrazek into making a pair of massive saves on Kuznetsov and Backstrom. Even Carolina’s goaltending — which looked like a weakness entering the series — has risen to the occasion.

It doesn’t seem to matter that Justin Williams and Nino Niederreiter have struggled to get going. Foegele and Lucas Wallmark have stepped up in their place. Sebastian Aho and Teuvo Teravainen remain dangerous, Jordan Staal brings a nice blend of size and three-zone utility, Jaccob Slavin and Brett Pesce are superb if underappreciated defensemen, and role players like Brock McGinn and Jordan Martinook are ensuring that there’s absolutely no let-up in pressure.

From top to bottom, Brind’Amour’s troops have rallied around a common vision and will stop at nothing to fulfill it. They’re flashing a will to win that Washington can’t seem to conjure. Each 50/50 puck battle or scrappy sequence in the trenches raises the same pressing question: How badly do you want it?

As it stands, the Caps are searching for an answer.