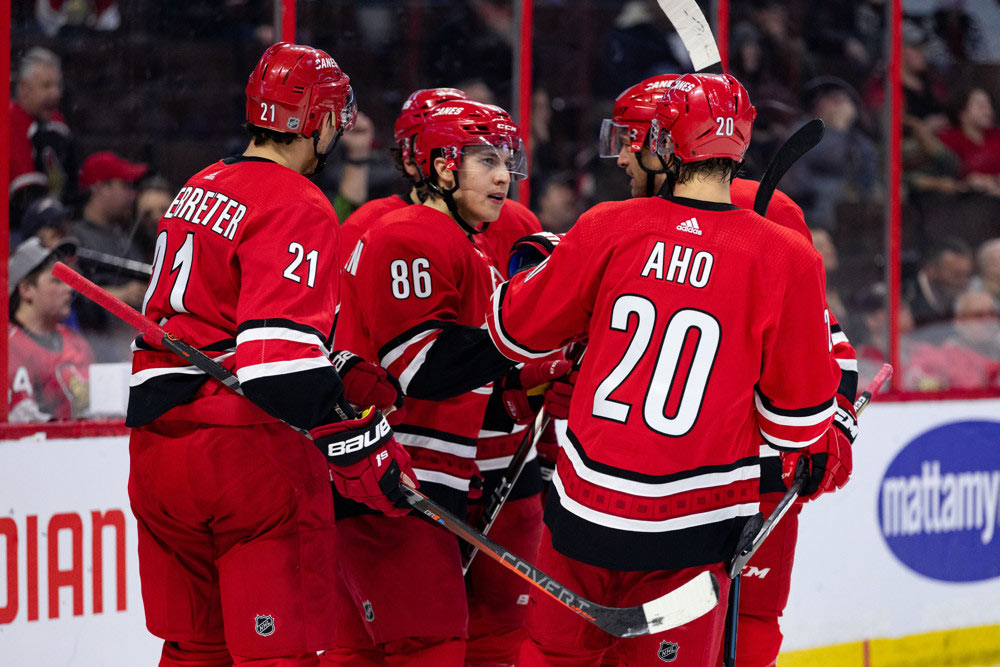 It may not happen as soon as teams would like, but puck luck almost always evens out in the end.

For much of the 2018-19 season, Carolina Hurricanes head coach Rod Brind’Amour watched his team play great hockey without the results to show for it. That has obviously changed in recent weeks. The club remains tireless in possession, but it’s now being rewarded with wins. A couple of new wrinkles on offense haven’t hurt either.

Since it acquired Nino Niederreiter (42 points in 66 games) for Victor Rask (8 points in 36 games) on Jan. 17, Carolina has gone 14-4-2 and vaulted itself back into a playoff spot. It sits in third place in the Metropolitan Division and just four points away from the top seed. That’s a remarkable turnaround for a squad that stuck to its guns rather than panicking as the end of the campaign crept ever-closer. Dating back to that trade, the team is scoring 3.70 goals per game and its offensive ranking has leapt from 27th to 14th.

Better still, this doesn’t feel like a total flash in the pan. A touch of good fortune has aided their efforts of late (103.6 PDO), which makes up for the dark cloud that loomed over their head for much of the campaign (97.8 PDO). While the Hurricanes may not be as dominant as this current hot streak suggests, they were clearly better than the early-season standings indicated.

On the whole, they control 54.8% of the shot attempts (2nd) and 54.4% of the scoring chances (3rd) at 5-on-5. The difference at present is they also own 52.6% of the goals scored (10th). Strong underlying numbers and a much more dangerous attack have turned this team into a true dark horse in the Eastern Conference.

The importance of Niederreiter’s arrival cannot be overstated. When news broke of the deal, there was a distinct possibility that he would be paired with young star Sebastian Aho (75 points in 66 games) on the top line to rekindle the former’s offensive upside and offer the latter more support against stiff competition. After some trial and error, Brind’Amour gave the duo a shot and is now reaping the benefits.

Niederreiter has produced 19 points in 20 games with his new team and looks rejuvenated on the attack. His touch and creativity, long stifled in Minnesota, jump off the screen. He’s skating and battling harder. He appears more confident. Maybe that’s due to the greater number and quality of opportunities he’s getting alongside a world-class talent like Aho. The Finn’s silky hands and wonderful vision are complemented nicely by a big-bodied winger who’s equally adept at creating plays and crashing the net. 53% of his shots are taken within a stone’s throw of the crease, and generating that level of havoc in close quarters is a boon for skilled teammates.

Moreover, he, Aho and captain Justin Williams (43 points in 66 games) lead by example and carry out Carolina’s game plan perfectly as a trio: 60.3 CF%, 59.3 SCF%, 76.0 GF%. To control such a massive share of the action — not only the goals — is impressive and speaks to their commitment to the club’s philosophy: Outwork your opponent.

Niederreiter’s insertion into the lineup has also had a ripple effect lower on the depth chart.

Brind’Amour has been afforded the luxury of splitting up his two main weapons (Aho and Teuvo Teravainen), thus manufacturing a more sustained threat that opponents must respect. They can no longer just key on the two Finns and ignore everyone else. By partnering Teravainen (61 points in 66 games) with Jordan Staal (17 points in 34 games) and Micheal Ferland (35 points in 57 games), Carolina boasts a legitimate top six.

Since returning from a concussion in late February, Staal has posted six points in five games as he gets up to speed. Even if his production wanes a bit, his three-zone reliability makes him a valuable piece nonetheless. Meanwhile, Ferland is a prototypical power forward with a nose for the net. Unsurprisingly, 58% of his bids come from the slot or closer. He can also change the tenor of a game with a single hit. He certainly delivered the goods on Tuesday night, as the intensity ramped up in a major way following his devastating check on Marcus Johansson.

Unfortunately, he was then hurt in a fight with David Backes. Assuming it’s not too serious — he’s dealt with nagging injuries all year — Carolina has found much more balance up front. Aho has a new running mate and Teravainen is standing on his own. This forward corps isn’t as star-studded as others around the league, but you’ll be hard-pressed to find a harder-working group.

Coupling that hustle with more potency changes the opposition’s approach too. The Hurricanes can make you pay now. Furthermore, it makes life considerably easier for the defensemen…and this was already quite a solid blue line.

Jaccob Slavin (28 points in 66 games) and Brett Pesce (20 points in 57 games) are two of the more underrated rearguards in the game. Slavin uses his smarts and mobility to neutralize opponents, whereas Pesce deploys his size (6’3”, 206 lbs) and active stick to that end. Calvin de Haan (13 points in 64 games) was a terrific signing in free agency, as the 27-year-old veteran can steady the troops with his poise and sound decision-making.

That may hurt the Hurricanes later down the road as the level of competition rises, but as it stands, they’re running like a well-oiled machine. From the leaders down to the blue-collar grinders, this team is giving opponents fits. While they may not be the most naturally gifted or physically imposing group, they’re right there in your face for a full 60 minutes. They seem to relish 50/50 battles. They force you to earn every inch of ice, and after a few lean months, their relentlessness is finally translating to the win column.

This is why you trust the process.