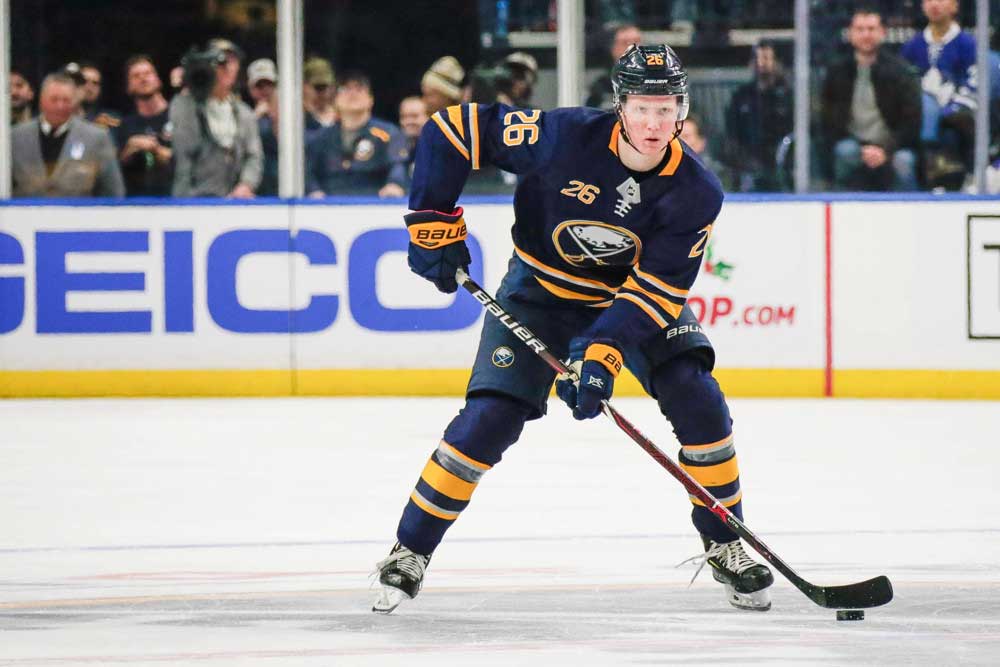 Each NHL season brings with it pleasant surprises and massive disappointments. Paper tigers are exposed, whereas dark horses emerge out of the blue to jostle for postseason positioning. You can count the 2018-19 Buffalo Sabres among the latter, as they’ve comfortably exceeded the general consensus through 46 games.

As a young team, they were only meant to offer brief glimpses of promise until they developed a sturdier foundation. Instead, they’ve posted a 23-17-6 record and sit just a hair outside the Eastern Conference playoff picture.

On one hand, there’s now a sense of palpable excitement surrounding the team. Its devoted fanbase has certainly waited long enough. On the other hand, this has accelerated the timeline of Buffalo’s rebuild and thus raised short-term expectations. A wild-card spot is well within reach, and that reality has placed pressure on an organization that was likely focused on slow and steady progress when the year began.

Unfortunately, Buffalo’s campaign has taken a serious turn for the worse.

Following a 10-game winning streak in November that took the hockey world by storm, the club has lost its wind and produced an ugly 6-11-4 slide. The club’s tumble down the standings has revealed a few sore spots, but first and foremost, the Sabres should be looking to address their lack of secondary scoring.

While the top line has cooled off lately, Jack Eichel (49 points in 43 games), Jeff Skinner (44 points in 46 games) and Sam Reinhart (42 points in 44 games) have enjoyed wonderful seasons. Eichel’s world-class talent and Skinner’s clinical shot have combined to generate more offense than the star forwards ever had separately, whereas Reinhart provides a solid dose of savvy playmaking.

It’s a superb unit that has given opponents fits…but it’s still just a single unit. Relying so heavily on one line is bound to betray you at some point, and it definitely has over the past 20 games or so.

Without a scorching-hot first line, Buffalo’s offense has sunk to 23rd in the league. It controls only 49.0% of the shot attempts (19th) and 46.9% of the scoring chances at 5-on-5 (26th). That won’t cut it moving forward when the intensity ramps up and teams’ weaknesses are exploited.

But where will this offensive support come from?

You can’t possibly ask for more from rookie blueliner Rasmus Dahlin (25 points in 46 games). While he’s fared exceptionally well in his first NHL season, he’s only 18 years old and shouldn’t be depended upon to carry the mail yet. Fellow rearguard Rasmus Ristolainen has also chipped in with 28 points in 46 contests. That’s stellar production from the back end.

Beyond them, elder statesman Jason Pominville (20 points in 41 games) is the only player whose performance shouldn’t be considered a letdown.

Where are Buffalo’s other forwards in this picture? Where is Kyle Okposo? The 30-year-old inked a seven-year, $42 million contract in 2016, and while his first two seasons with the club weren’t great, at least he was producing offense (52-point pace). In 2018-19, he has a paltry 18 points in 46 outings. That’s an awful yield for his cap hit.

To be fair, he requires a play-driving center because he’s never been the type of winger to dictate the play. There doesn’t appear to be a viable top-six candidate to fill that role, as 20-year-old pivot Casey Mittelstadt (13 points in 46 games) — Okposo’s most frequent linemate — isn’t ready to take charge. The talent is there and should translate to the big leagues in due course, but as it stands, he doesn’t appear assertive or strong enough on his skates to control the ice as a legitimate second-line center.

Together, Okposo and Mittelstadt’s numbers are very concerning: 44.4 CF%, 40.8 SCF%, 41.7 GF%. Okposo isn’t an opportunistic scorer, so opponents getting almost 60% of the chances when he’s on the ice is sure to hamper his contributions.

There’s nowhere else to turn, though. Evan Rodrigues (14 points in 40 games), Johan Larsson (7 points in 40 games) and Vladimir Sobotka (9 points in 43 games) aren’t any better than Mittelstadt, and they’ve shown as much in their brief time with Okposo. Patrik Berglund, who came over in the Ryan O’Reilly trade and has top-six experience, saw his contract terminated in December for failing to report to the team. There’s another option down the drain.

Conor Sheary (18 points in 42 games) hasn’t really seized his opportunity either. After a couple of promising campaigns in Pittsburgh, Buffalo acquired the diminutive winger (5’8”, 176 lbs) in hopes of tapping into unrealized potential. Perhaps he would spread his wings with more ice time and responsibility. Instead, he’s merely producing at the same rate — and it doesn’t move the needle.

Elsewhere, 6’6” winger Tage Thompson (10 points in 39 games) has flashed some skill this season, but the 21-year-old remains a work in progress. Tall forwards usually require time to fill out, and that’s certainly true of the 205-pounder. With a bit more weight and a greater understanding of his frame, Thompson could flourish in a few years.

That doesn’t help the Sabres right now, though.

Outside of the top line, their forward ranks feature youngsters who aren’t quite ready (Mittelstadt, Thompson) and veterans who don’t belong anywhere near the top six (Sobotka, Larsson, Zemgus Girgensons). None of the complementary forwards do, really, which explains the tight spread in ice time. Head coach Phil Housley isn’t entirely sure what to do or whom to count on.

Ultimately, the offense finds itself in an awkward situation because the franchise does as well. It isn’t clear how the organization should proceed: If Buffalo is looking to compete for a playoff spot, then general manager Jason Botterill may need to sacrifice high-end futures for a player who can make a difference immediately. If the team is content to watch the season slip away, then taking a patient approach is the proper course of action. However, winning experience is crucial for the development of young players, and Eichel has already voiced frustration over his club’s struggles in the past.

Once a team submits cause for optimism, managing expectations becomes difficult. Rebuilds don’t happen overnight, and any rash moves could derail the Sabres for a couple of years. By that same token, coming so close to a playoff berth only to miss out because the front office sat idly by would represent a tough pill to swallow.

By defying preseason expectations, Buffalo is now faced with an uncomfortable dilemma.