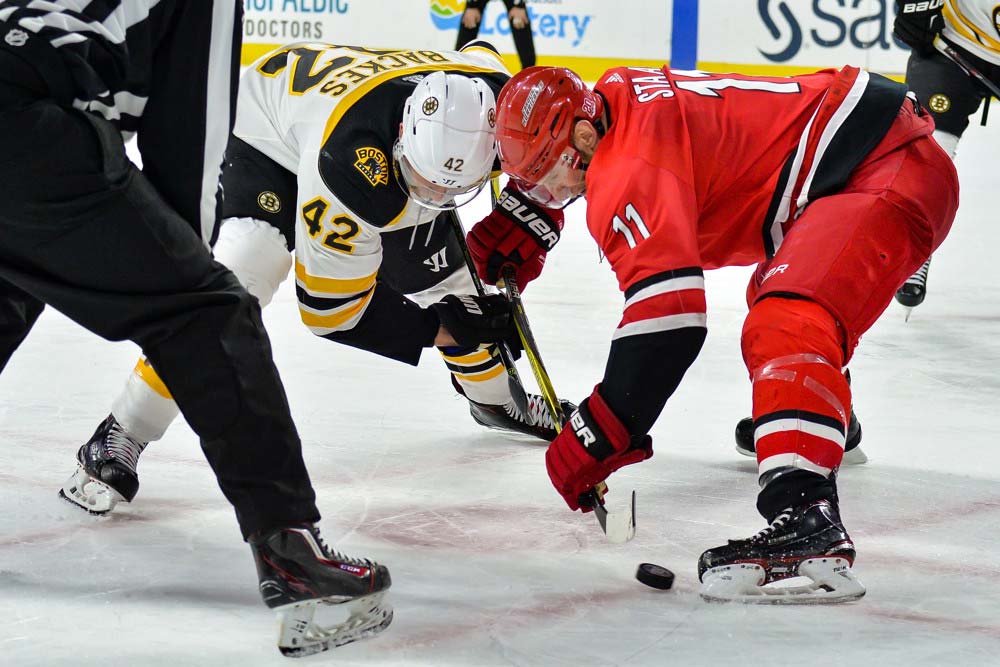 After the Tampa Bay Lightning and Pittsburgh Penguins were ousted in the first round, Boston Bruins play-by-play man Jack Edwards was no longer alone in his bullishness. Many now believed that the Stanley Cup was Boston’s to lose.

The Bruins haven’t done anything to put a damper on these expectations, eliminating the Toronto Maple Leafs and Columbus Blue Jackets to reach the conference finals for the first time since 2012-13. While they control 51.6% of the shot attempts (7th) and 50.3% of the scoring chances (10th) for an expected goal share of 50.2% (8th) at 5-on-5, they look the part of a front-runner because they own the trenches. Bruce Cassidy’s men rank second in GF% on scoring chances (62.2) and third on high-danger opportunities (63.2). Their opponents are welcome to touch the puck on the outside, but once the action comes anywhere near the slot, the Bruins dig their heels in and defend their stronghold as if their lives depend on it.

This is a seasoned group that put away a pair of strong contenders because it understands the key to postseason victory: winning in the dirty areas.

However, that advantage may not exist in Round 3. The top team in SCGF% and HDGF% this spring is…the Carolina Hurricanes. Head coach Rod Brind’Amour’s club has played stellar three-zone hockey all season. It was rewarded down the stretch with a wild-card playoff berth and has made the most of this appearance by knocking out the defending champion Washington Capitals and the New York Islanders — the sexier underdogs that had just swept the Pens.

The Canes work as a well-oiled, possession-oriented machine. Unlike most teams, though, Carolina doesn’t see a huge drop-off in performance as it approaches the opposition’s cage. It’s registered a 56.5 CF% (1st), 53.5 SCF% (3rd) and 54.5 HDCF% (5th) for a 55.2 xGF% (3rd) in the spring. In other words, it doesn’t offer its opponents any room to breathe over the entire surface of the ice.

Granted, the team has received better goaltending than expected, which has vaulted its actual goal share to 65.0% (1st). That may not hold up quite as well against the Bruins, but the Canes are a balanced squad that doesn’t rely on star power or special teams to seal the deal.

In fact, their power play (10.5%) and penalty kill (75.0%) represent two of their biggest weaknesses. Boston holds a clear edge in that department, as it ices the top man advantage in the playoffs (28.6%) and a stingy PK (83.8%). Any time a game slips away from even strength, that’s an opportunity for the Bruins to seize momentum. On the power play, they must strike when Jaccob Slavin and Brett Pesce are on the bench. Carolina leans on that pair for a reason: Both are terrific with their active sticks and make good reads down low to minimize threats. On the other hand, Justin Faulk alternates between passable and horrendous. He concedes a far higher rate of scoring chances and high-danger bids than Slavin and Pesce and occasionally struggles to clear the puck.

If Boston can’t make a dent early on, it should consider starting its second unit against Carolina’s best defenders, allowing Patrice Bergeron, Brad Marchand, David Pastrnak and Torey Krug to feast on a more vulnerable group for the remaining minute or so of PP time.

Of course, Tuukka Rask’s play (2.02 GAA, 93.8 SV%) can’t be ignored. The 32-year-old was the team’s trump card against the Blue Jackets, as he tracked and repelled every puck effortlessly and sapped Columbus’ energy in the final two games. Once John Tortorella’s club discovered that the man between the pipes was in the zone, the series was effectively over.

Rask will need even more of those outings in the third round because Carolina is on a roll. It may lack Toronto and Columbus’ scoring touch, but its commitment to Brind’Amour’s system is remarkable. The Hurricanes hound the puck relentlessly. From captain Justin Williams and young star Sebastian Aho down to blue-collar grinders like Brock McGinn and Patrick Brown, they all battle hard along the boards and sacrifice their bodies in service of the team’s collective goal. In essence, they’ve been playing playoff hockey for months. They boast a winning record when trailing first, they’re .500 when trailing after two periods and they rank second in one-goal games. They refuse to go away quietly and appear to be built for the postseason gauntlet.

Moreover, they’re getting healthier. Andrei Svechnikov (4 points in 5 games) returned from an upper-body injury midway through the second round, and the promising rookie brings a nice dose of net drive and finish to the forward corps. Meanwhile, Micheal Ferland (upper body) is expected to rejoin the lineup at some point in the series. The 27-year-old power forward was banged up for the latter half of the season, but when he’s in full stride, he can be a devastating presence with decent hands in tight.

On the flip side, Boston’s defensive corps will look depleted to start the matchup.

Charlie McAvoy (6 points in 13 games) was suspended one game for his reckless hit to Josh Anderson’s head in Game 6 of the Bruins-Blue Jackets series. The 21-year-old possesses great physical tools and is already counted on more than any Boston blueliner (24:46 TOI). He’s made those minutes count with the highest GF% (66.7) along the back end. Especially against a strong forechecking opponent, the team will miss his ability to launch a breakout on his own. Steven Kampfer will draw in for Game 1. The veteran puck-mover is serviceable, but there’s no telling whether he’s ready for playoff action — and the Hurricanes won’t let him ease into it.

Lower on the depth chart, Kevan Miller (lower body) remains out for the foreseeable future. The Bruins aren’t quite as nasty without the 31-year-old. He also served as the safety net for Matt Grzelcyk, a talented albeit mistake-prone blueliner with a 41.7 GF%.

This places an even heavier burden on Chara and Brandon Carlo to keep the slot area clean for Rask. Though the 42-year-old can be exploited on rushes, he is still an immovable force in the trenches with a reach that covers virtually the whole defensive zone. Meanwhile, 22-year-old Carlo is a 6’5”, 212-pound monster who is carving out a reputation as a shutdown defenseman. He isn’t a bruiser, but he’s deceptively quick and uses his wingspan to blanket opponents. It’s no surprise that Chara and Carlo boast a sub-1.50 GA60. They protect their house very, very well.

Any letup in that regard could prove fatal against a rabid Hurricanes squad that will throw the kitchen sink at you for 60 minutes.

In the two previous rounds, the Bruins shelled up to survive onslaughts from Toronto and Columbus’ star players when necessary. The Hurricanes won’t lay off the gas, though. They’re going to keep coming and challenge Boston’s solidity from the opening puck drop through to the handshake line. They’re going to test its will.