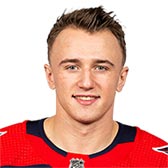 STRENGTHS
Speed: With his straight-line wheels and outstanding shot, Vrana is a terror in open ice. His ability to make someone pay for their sloppiness can alter a team’s entire game plan—not to mention his own line’s complexion. We’re talking about elite speed here. There aren’t many purer home run threats in the NHL.

Finish: Since he’s become a top-six fixture, he’s converted shots at one of the better clips in the league. He’s particularly adept at firing top-corner wristers in stride, but he can unleash deadly one-timers as well. Essentially, if you let him pull the trigger, you’re making a grave mistake.

Passing: Though it’s not Vrana’s first instinct, he’s a gifted playmaker too. He can feather passes through defenders with ease, and when he’s in setup mode, he has no trouble finding men in scoring position. The only reason he doesn’t have higher assist totals is that he’s often the designated sniper on his line.

WEAKNESSES
Playoff Production: There’s no getting around his lousy postseason numbers. Unfortunately, they aren’t all that surprising because Vrana isn’t the most adaptable player. If you take away his rush opportunities, you eliminate his primary contributions, and he ends up looking out of his depth. It does not build him to drive the net or muck it along the boards.

Defense: Vrana will put forth an honest effort when back-checking, but his play away from the puck is otherwise quite poor. He cheats for offense, drifting above his mark and thus pulling his teammates out of position as he searches for a turnover to jump unto. This makes him difficult to play in high-leverage situations.