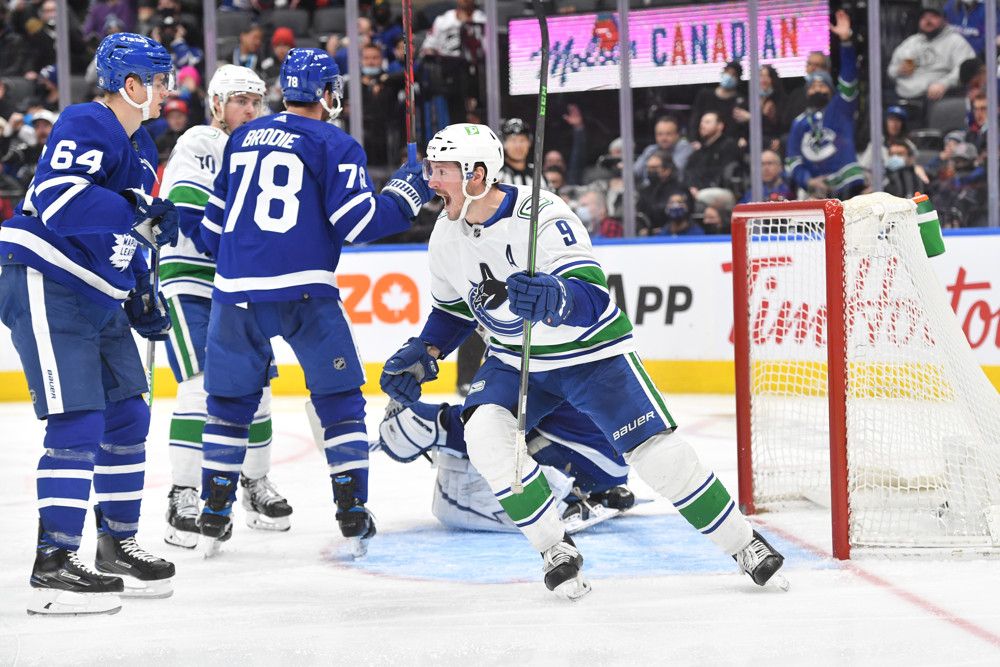 A team with explosive top-end talent might lack scoring depth. A club that frequently trades chances might be interested in bolstering its blue line. A formidable group of skaters can be undermined by poor goaltending. A dominant even-strength outfit might stumble on special teams.

Every contender has a weakness. Luckily for them, the trade deadline is just around the corner. Buyers will have the opportunity to fortify their ranks before they enter the playoff crucible—and they can’t afford to miss. This managerial home stretch can make or break their season. But with a limited number of desirable assets in their back pocket and potentially more than one foible to address, it isn’t always clear how teams should proceed.

That’s precisely why J.T. Miller (63 points in 55 games) is this year’s trade-deadline prize. The 28-year-old Vancouver Canucks forward can play center or wing, he can play with stars or specialists, he’s physical, he’s experienced, he’s versatile offensively, capable defensively and strong on special teams. Outside of goaltending, if you need a boost to get you over the hump, odds are Miller can provide it.

In the postseason, each possession matters and 50/50 battles consequently take on greater importance. Miller happens to thrive in those settings. His heavy style allows him to foil breakouts, maintain control of the puck under pressure and create opportunities off the cycle:

At 6’1” and a thick 218 pounds, Miller is built for the trenches. When you combine his strength and fearlessness with stellar puck skills and hockey sense, you’ve got a player who can consistently give you an edge in the heart of the action. His physicality in the corners can be overwhelming, and after a few encounters, some defensemen opt out. He wears on you. From there, he can find breathing room or pick out a quality pass.

Now, it’s worth mentioning that he isn’t an ice-tilting, even-strength monster (48.0 xGF%, 50.0 GF%). Assuming you’ve announced yourself as a buyer, though, you should already have those. Miller is the final piece. A battle-ready veteran who can sharpen the tip of the spear or shore up your fortress.

On the defensive side, Miller again offers a healthy blend of IQ and brute force. He positions himself fairly well and boasts an active stick, but when the play goes anywhere near the wall, he will gladly deliver a cold shoulder:

His ability to defend with both smarts and brawn will prove invaluable in the playoffs, where games often shift from structured affairs into all-out madness in the blink of an eye. You need to be able to hold your own under those circumstances, and Miller is well-suited to them as a heart-and-soul two-way warrior. Among the 102 forwards who have played at least 700 minutes at 5-on-5 this season, he ranks eighth in hits/60. He’s never shied away from a high-impact collision. If anything, that’s when he’s most effective.

Miller is comfortable on the penalty kill too. He leads Canucks forwards in average short-handed ice time and is right behind elite grinder Tyler Motte in goals against/60. Killing penalties boils down to anticipation, hustle and sacrifice, and Miller has those qualities in spades. While he isn’t a pure shutdown forward, you’ll never worry with him on the ice either.

Oh, and it doesn’t hurt that he wins 53.3% of his faceoffs in all situations.

On the offensive end, Miller is a playmaking power forward. Even though he’s converted at a great clip throughout his career (14.4%), his first instinct is to pass the puck—and he’s quite good at it:

Unlike most top-tier playmakers, he doesn’t rely on flash or feathery saucer passes. He waits for a clean window to materialize or muscles a pass to its destination when necessary. It isn’t always pretty, but it gets the job done. Since becoming a Canuck in 2019-20, he ranks 24th among all forwards in primary assists/60.

Miller is especially deadly on the power play. From the left flank, he uses the entire surface of the offensive zone to threaten the opposition. He looks for a tap-in option in tight, a shot from the bumper or a cross-seam pass for a one-timer. If those are covered, he dishes to the point man in the middle of the ice. A PK unit can only cover so much ground, so it’s not surprising that Miller’s varied approach has yielded outstanding results. Over the past three seasons, he’s eighth in primary assists/60 on the PP.

Part of the reason he’s such a productive passer is that he isn’t a one-dimensional weapon. He’ll take matters into his own hands when he senses the right opportunity and switches up his shot location to keep goaltenders guessing as well. Moreover, he’s a menace in the slot and a locomotive once he gathers a head of steam in the neutral zone:

So why would the Canucks even deal him away? That’s a valid question. Their core of Elias Pettersson, Quinn Hughes, Brock Boeser and Bo Horvat is looking to compete now, Miller is in his prime and he carries another year of term at an incredibly palatable $5.25 million cap hit. Vancouver’s recent 7-3-0 run has also put the club within striking distance of a wild-card spot. It may want to hold on to its most complete player.

But if he is available, any club with title aspirations would be foolish not to try their luck. No matter what you need, this jack-of-all-trades can bring a healthy dose of it.