Victor Oloffson Leads the Way as Sabres Off To Sizzling Start 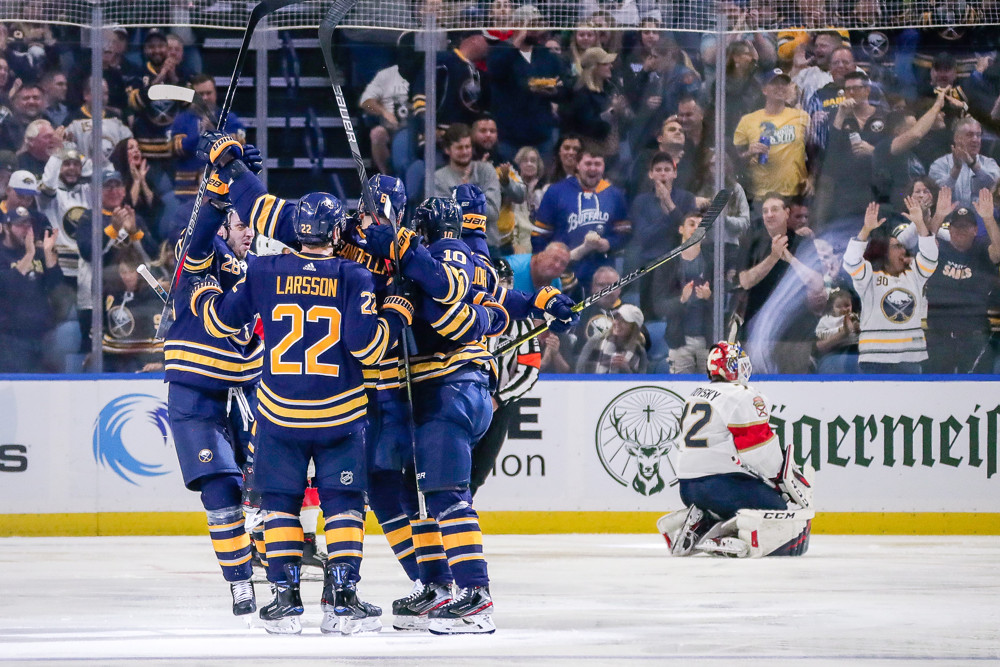 New, relatively obscure NHL records are still being set as the league is now into its second century. The latest comes courtesy of 24-year-old Swedish rookie forward Victor Olofsson of the Buffalo Sabres. He’s now the first player in history to notch his first seven NHL goals all on the power-play. Olofsson set the mark on October 14th at home in a convincing 4-0 win over the Dallas Stars.

It was the rookie’s fifth goal of the season after scoring twice with the man advantage last year during a six-game big-league stint. Olofsson now holds the record all by himself after Craig Norwich of the Winnipeg Jets scored his first six goals on the power-play in 1979/80 followed by Sylvain Turgeon of the Hartford Whalers in 1983/84 and Jeff Norton of the New York Islanders achieving the feat in the 1987/88 campaign.

Olofsson was perhaps a long shot to skate in the NHL at all as he wasn’t selected until the seventh round of the draft in 2014 with the 181st overall pick. The 5-foot-10-inch, 175 lb winger was playing junior hockey with Modo in his homeland when drafted and posted 31 goals and 53 points in 44 games in 2013/14 with four goals and nine points in five playoff outings.

He remained in Sweden in the Elite League and displayed a fine set of hands until the end of 2017/18 when the Sabres inked him to a two-year, entry-level contract. He led his league in goals in 2017/18 with 27 in 50 games. Olofsson played the 2018/19 season in the American Hockey League with the Rochester Americans and had no problem adapting to the North American style of hockey with 30 goals and 33 assists in 66 games. He was called up for six games with the Sabres and banged in his two power-play markers.

Olofsson made the 2019/20 opening-night roster and it looks like he’s in the NHL to stay this season. He’s definitely been exceptional on the power-play so far and the Sabres were tops in the league with the man advantage. They had a success rate of 42.9 per cent as of October 15th with 10 goals while the league average was 20.4 per cent. Their penalty-killing wasn’t at the same elite level though at a 22nd-ranked 76.5 per cent.

The power-play was certainly one of the reasons the team was off to an excellent 5-0-1 start as they led the league with 11 points early on. Their 24 goals was tied for second-most in the league and their 13 against resulted in a 2.17 goals-against average which was the fifth lowest. Goaltender Carter Hutton already has four wins under his belt with a sparkling 93.1 save percentage and goals-against average of 1.74.

There’s no doubt the Sabres and their power-play are going to come down to earth some time in the near future but they can hopefully rack up as many points and goals as possible before they do. In the meantime, their fans are definitely enjoying the ride and excited about the potential of the squad. But on the other side of the coin they’re not getting too carried away considering how the team teased them last year and then fell apart.

Buffalo ran off a franchise-record 10-game winning streak early last season but went downhill fast after that and failed to make the playoffs. Phil Housley paid for the collapse with his head coaching job and Ralph Krueger was hired as the new bench boss.

Krueger has seen his troops in top form in October with Jack Eichel leading the way with three goals and nine points in the first six outings. Sophomore defenseman Rasmus Dahlin, who was a finalist for the Calder Trophy last season as the league’s rookie of the year, had chipped in with a goal and eight points while Oloffson had five goals and two assists.

The Sabres have also been getting offensive contributions from the likes of Sam Reinhart (3G, 3A), Jeff Skinner (4G, 1A), and Marcus Johansson (3G, 2A) while Conor Sheary has three points in three games. Eichel and Dahlin have also been major reasons the team’s power-play has been so potent with six points each with the man advantage.

The squad has been efficient in their own end of the rink and the goaltending of Hutton and Linus Ullmark have been there to bail them out when slipping up.  Perhaps the only disappointment so far has been the production of forward Jimmy Vesey who’s gone pointless in six games.  The 26-year-old winger had just five shots on net in that span despite seeing an average of 11:56 of ice time per night.

Vesey came over to the Sabres this summer with 50 goals and 40 assists in 240 career NHL encounters and at 6-feet-3-inches tall and weighing over 200 lbs was expected to help out with the offense. It’s still early yet and he should eventually come around but his confidence must be pretty low at the moment. Vesey, a former college hockey standout and Hobey Baker Award winner, took the long route to Buffalo and fans are hoping he soon snaps out of his slump.

Vesey was drafted 66th overall by the Nashville Predators in 2012 but didn’t sign with the club. Nashville then traded him to the Sabres in June of 2016 but he didn’t sign with Buffalo either. Instead, he inked a deal with the New York Rangers as an unrestricted free agent a couple of months later. He spent the last three seasons in the Big Apple before Buffalo acquired him this summer for a third-round draft pick in 2021.

Overall, the Sabres are off to an excellent start but the key this season will be to play consistent hockey and make the playoffs. Hopefully the club learned from last year’s train derailment following their winning streak and won’t let it happen again.