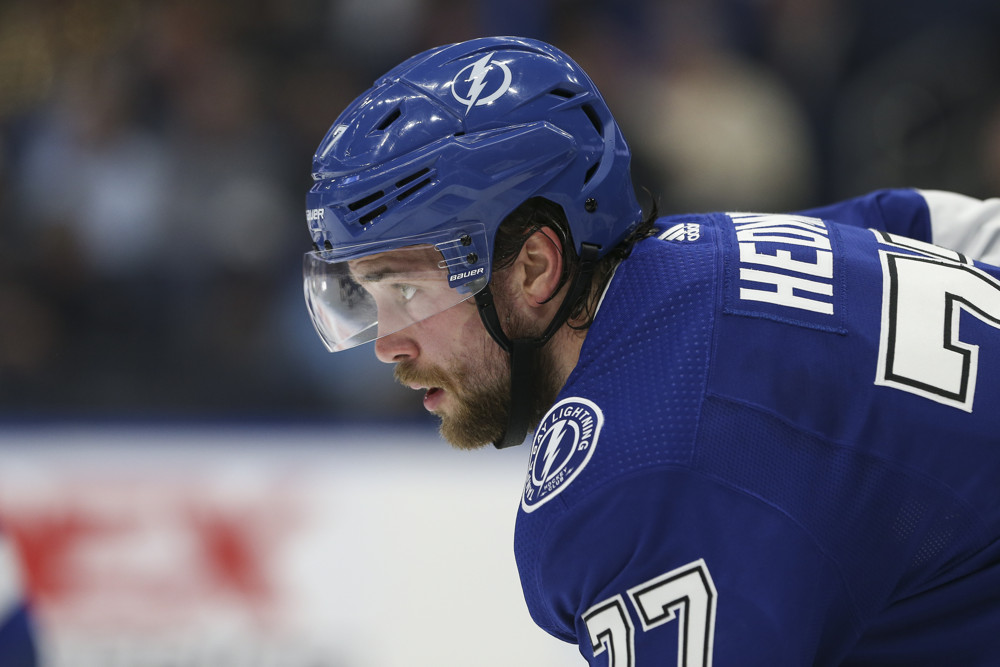 The Dallas Stars would rather forget Game 3 of the Stanley Cup Final. They fell behind 2-0 seven minutes into the contest and the Tampa Bay Lightning didn’t relent until they had a 5-1 cushion to lean on. It was…ugly.

Sure, Steven Stamkos’ brief return from injury (2:47 TOI) and Brayden Point’s continued recovery didn’t help matters. Tampa Bay bolstered a forward corps that was already as deep and potent as any in the league. Despite a couple of dicey moments, Andrei Vasilevskiy was solid in the crease as well. And maybe the Stars’ high-wire act was finally coming back to bite them. You can only walk a tightrope for so long after all.

Mostly, though, it boiled down to Victor Hedman. Dallas looked like a mere shadow of itself because the Lightning’s 6’6”, 229-pound star decided to tower over his opposition.

When he’s engaged in the action—as he has been for most of the postseason—he can impose his will on the game like few other players in the world. A man of that size skating that fast while flashing great instincts is a nightmare to contain. Defensively, his reach and mobility allow him to cover a huge portion of the ice too. This nullifies one of Dallas’ biggest strengths: speed on the counterattack.

Early in the first period, Denis Gurianov appears set to separate himself from the pack:

Against any other defender, that’s a clear-cut breakaway. Instead, Hedman uses his long stride to make up ground and tie up Gurianov’s stick, preventing a glorious chance without even taking a penalty. That’s almost unfair.

On the offensive side, the Swede leverages both his tools and brains to apply a ton of pressure on opponents. He doesn’t simply generate good chances. He’s always on the prowl for a better look. On this sequence, he holds on to the puck for an extra half-second and comes a hair away from beating Anton Khudobin:

Hedman’s decision-making and timing are tremendous—especially for a player who could coast on his physical attributes alone. His feel for when to distribute the puck, combined with his accuracy, makes him one of the very best stretch passers in the NHL. It isn’t always flashy, but he repeatedly sets the table for his teammates to move in for the kill. That knack was highlighted when he hit Stamkos and Nikita Kucherov on the tape leading up to Tampa Bay’s 2-0 and 4-1 goals:

Worse still for the Stars, Tampa Bay’s three-zone lynchpin has also become more assertive as a shooter. He now ranks second in the playoffs in goals and has become only the third defenseman in history to notch 10 goals in a single postseason.

On a second-period man advantage, his play recognition shines. Anticipating a puck recovery by Anthony Cirelli, he drifts a few feet forward and claims the middle of the ice to produce a considerably more dangerous bid. As a result, his wrister fools Khudobin stick side:

All told, he racked up three points and the Lightning controlled 55.5% of the expected goals during his shifts in Game 3.

While Hedman isn’t as spectacular as his puck-moving contemporaries or as suffocating as a pure shutdown rearguard, he dictates the play more thoroughly than any defenseman around. His poise with the puck is extraordinary. Moreover, he constantly picks the right moments to deploy that talent, supporting Tampa Bay’s attack with well-timed pinches and optimal spacing in the offensive zone. Once the Lightning start wheeling and dealing, opponents can only prey that they can bend without breaking.

The level of dominance that Hedman is displaying at present places him in rarefied air. Beyond his 20 points in 22 games, Tampa Bay owns 80% of the goals scored when he’s on the ice at 5-on-5. That unsurprisingly ranks first in the playoffs. Once head coach Jon Cooper came to his senses and replaced Mikhail Sergachev with Hedman on the top power play unit, the man advantage became much more consistent as well. His crisp passing and clever shot selection are plain to see, resulting in more room and better looks for Point and Kucherov in particular. Tampa Bay’s scoring rate basically doubles (4.79 to 9.72 GF60) when Hedman occupies the point.

His ridiculous combination of size and speed allows him to affect the play when virtually no one else could, whereas his hockey IQ upgrades the quality of Tampa Bay’s offensive forays over and over again. Even though he’s a high-event player, he ensures that nearly all of these events fall in his club’s favor. He’s somehow delivering first-line production while conceding a microscopic number of goals (0.83 GA60).

Hedman isn’t simply the undisputed best defenseman in the NHL. He’s one of the very best players in the world, and to the Stars’ dismay, he’s currently enjoying a postseason for the ages.