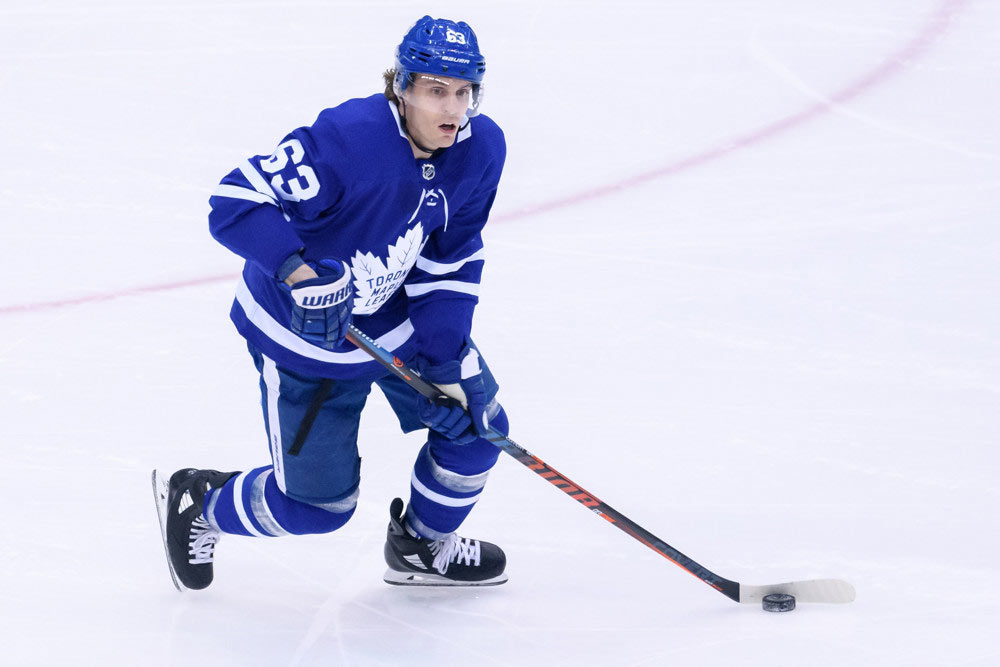 The Toronto Maple Leafs are one of those teams lucky enough to ice a host of dangerous offensive NHL players. If one or two of them have an off night there’s usually somebody further down the lineup who’s more than capable of making up for it. They often take turns with the likes of Kasperi Kapanen, Andreas Johnsson and Zach Hyman leading the way. However, the latest player to grab all the headlines in the city is 29-year-old winger Tyler Ennis.

The native of Edmonton, Alberta has been in the league since 2009/10 after being drafted 26th overall by the Buffalo Sabres in 2008, but scored his first NHL hat trick in a 6-2 rout over the Calgary Flames on March 4th. This isn’t to say scoring goals is unusual for Ennis as it isn’t. He may be just 5-feet-9-inches tall and weighs in at 160 lbs, but he has shown over the years to own a sweet pair of hands.

Ennis has played in 532 big league games with 117 goals and 275 points to his name along with three 20-goal seasons which came with the Sabres. The main reason those numbers aren’t higher is due to the fact he’s been injury prone for most of his NHL career.

Despite his size Ennis led the Medicine Hat Tigers in scoring during his last two seasons in junior in the Western Hockey League. He played 245 games with the Tigers and racked up 115 goals and 236 points. He chipped in with 35 points in 45 playoff outings and helped the team win the Ed Chynoweth Cup in 2006/07. Ennis was also named the league’s most sportsmanlike player for 2007/08 and 2008/09 and helped Canada win the World Junior Championships in 2008/09 with seven points in six contests.

The youngster made his pro debut in 2009/10 with the Portland Pirates of the AHL and led all rookies in scoring with 23 goals and 65 points in 69 games. This enabled him to take home the league’s rookie of the year award and earn a spot on its All-Rookie Team. The Sabres also dressed Ennis for 10 games that season and he posted three goals and nine points.

After two more injury-riddled years the Sabres traded Ennis in a multi-player deal to the Minnesota Wild in 2017. Although he managed to play in 73 games that season he registered just eight goals and 22 points. The Wild then decided to buy out his $4.6 million-per year contract and the Maple Leafs signed him last summer for a year at the bargain basement price of $650,000, which is actually the league’s minimum this season.

Ennis was given a shot on the top two lines early in the campaign, but it wasn’t too long before he was being used as a bottom-six forward. He supplied some secondary scoring to the squad with seven goals, but then found himself back on the injured list with a broken ankle. After missing 26 games Ennis has returned with a bang by scoring five times in his last five outings, of course being aided with his hat trick against Calgary.

Still, he’s producing at a pace of .43 points-per game and is playing an average of 10:12 minutes per night. His 12 goals and 17 points means he’s on pace to finish the year with 17 goals and 24 points in just 56 games. He’s also been given some time on the power-play and has made the Leafs’ fourth line a legitimate scoring threat most games.

Ennis isn’t afraid to do his own dirty work and most of his goals this year have been highlight-reel quality. But perhaps mucking in the corners isn’t the best idea due to the numerous injuries he’s suffered so far. Head coach Mike Babcock is thrilled with Ennis’ play though as he gives the club a solid fourth line for the playoffs with either Trevor Moore, Frederick Gauthier or Nic Petan, who was picked up in a deal with the Winnipeg Jets for Par Lindholm on trade deadline day.

The injuries have played havoc with Ennis’ career, but he’s only 29 years old and feels he has a lot left to offer. He recently told Sportsnet.com, “It was a tough spell for me the last couple years. I just want to be as good as I can be every day and get back to where I was. I’m determined to get there. I want that back again and it feels like it’s coming, the confidence is coming back.”

With his play this year, it appears the Wild may have acted prematurely when buying out his contract. Ennis is leading the Leafs with 1.77 goals per 60 minutes at even strength while Auston Matthews scores 1.33, Andreas Johnsson 1.34 and John Tavares scored 1.61 goals per 60 minutes played.

Ennis is grateful to the Leafs for giving him a chance to prove he’s still an NHL-caliber player and added, “As soon as I was a part of Toronto, I just felt good. They believed in me and that’s so huge in hockey. That belief, when an organization is behind you and they want you to succeed. It was a good fit.”

Even though he’s playing well, Ennis’ stint in Toronto could very well be a short one. He’s proven he still has what it takes to be successful in the league and will likely garner plenty of interest from other teams when his contract runs out in the summer. But with the Maple Leafs up against it when it comes to the salary cap it’s doubtful they’ll be able to pay Ennis what he deserves next season.