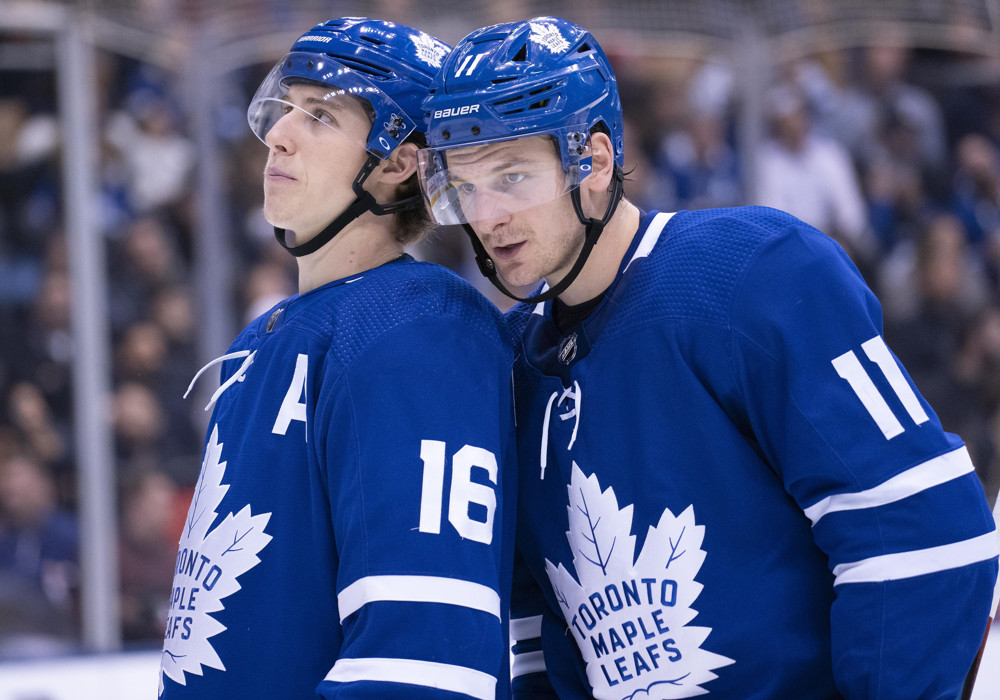 Too often in Game 1, the Leafs stumbled right into the Blue Jackets’ trap by trying to regroup before attacking. This allowed Columbus to establish its defensive posture and easily disrupt Toronto’s efforts. Take this example from Sunday night:

Nylander hops on a loose puck in Columbus’ end with ample separation…and he retreats into the neutral zone. Toronto proceeds to circle back only to ultimately settle for a dump-in. In other words, the Leafs traded in guaranteed possession in the offensive zone for a faint hope of regaining it. Where’s the sense in that? This approach appears all the more foolish when you’re facing the fourth-ranked defense in the league. Columbus’ outstanding top four on the back end (Seth Jones, Zach Werenski, David Savard, Vladislav Gavrikov) is complemented by a gritty and determined forward group that has bought into head coach John Tortorella’s stingy system. In the regular season, the team allowed the second-fewest high-danger attempts and third-fewest high-danger goals in the NHL per 60 minutes.

The Leafs’ desire to patiently skate around the Blue Jackets in Game 1 was fine by Tortorella because that’s precisely where he wants them: on the perimeter.

For Game 2, Keefe tweaked his lineup with a more direct strategy in mind. Though Marner isn’t necessarily faster than Nylander, he certainly plays faster. The 23-year-old’s game is all about pace, blazing through the neutral zone and looking for incisive passes almost as soon as the puck touches his stick. A fair share of his designs fall flat, but he’s also the best instant-offense option on the team. He can conjure something out of nothing, which is particularly important because franchise center Auston Matthews will lock horns with Jones and Werenski throughout the entire series.

Nylander’s deliberate approach also works in service of speed on the second line. If that sounds counterintuitive, you have to take captain John Tavares’ average skating into account. Too often alongside Marner, he wouldn’t get to his spot on time, forcing the young playmaker into low-percentage Hail Mary attempts. But with a more controlled winger by his side, Tavares can engage in the action and provide Toronto with a fully realized attacking front. In this case, the line’s speed is predicated on numbers. They can move the puck on a dime and play off each other because they’re all in the frame.

Toronto’s top six now features two types of speed, and both are effective at breaking down defenses.

That was plain to see on Tuesday. Matthews notched a goal and an assist while enjoying considerably more space, whereas Tavares scored the insurance marker after leading both teams in high-danger chances (7). That’s the sort of output you expect from a team that invested so heavily in center depth.

Marner’s presence alongside Matthews immediately altered the complexion of the first line. Even though he still isn’t performing up to par, for better or worse, he likes to press the issue. In fact, his reliance on pace may well explain his questionable choices on Toronto’s static man advantage. At even strength, however, that same trait is just what the doctor ordered. Right from the opening period in Game 2, the difference was night and day:

Matthews pokes the puck free to Jake Muzzin behind Toronto’s net, the blueliner spots his outlet along the boards and Marner connects with Matthews moving through the neutral zone. In the span of nine seconds, the Leafs transition from a sound defensive stance to a solid shooting opportunity for a world-class sniper. There was no glaring turnover to capitalize on. Keefe’s troops just decided to get downhill in a hurry and consequently generated a good look.

Tavares, Nylander and Ilya Mikheyev put forth a stellar outing on the second unit as well, hounding the puck and never granting Columbus the time it needed to find its footing. Watch how the unit’s simple, straight-line blitz flusters the Blue Jackets’ top pair:

The Leafs possess world-class talent, but that talent requires space—and that space comes from pace. If Toronto ever needs a reminder of this, it should examine the shift that yielded Matthews’ game-winning goal on Tuesday:

The team first slips into old habits, turning back a few times before attempting its zone entry. By the time the Leafs are ready to try their luck, all five Blue Jackets surround the point of attack and they comfortably snuff out Toronto’s options. Take note of how Columbus sways back and forth as a cohesive, well-oiled defensive machine. There’s simply nowhere for the Leafs to go because there are already defenders everywhere.

The sequence kicks off with Matthews recovering the puck in front of his net. This is exactly the kind of situation where the Leafs would default to resetting before running into a brick wall. Instead, even at the tail end of his shift, Matthews sees some daylight in front of him and floors it. With only two defenders in the play—one of whom is forward Oliver Bjorkstrand—he recognizes his opportunity, dishes to Zach Hyman and forces Bjorkstrand to cover his 6’3”, 220-pound frame. It doesn’t end well for Columbus.

The Blue Jackets don’t concede much, so it would behoove the Leafs to keep taking what they’re given. If there’s a window to gather a head of steam, lay on the gas.

In Game 2, Toronto imposed a dizzying tempo that put the Blue Jackets on their heels throughout the contest. The result? Keefe’s troops prevailed by a 3-0 margin and went from controlling 47.9% to 67.3% of the expected goals. In essence, they looked like an actual team working in sync rather than a fractured collection of talent.

Toronto wasn’t perfect by any stretch—especially on the power play—but it doesn’t need to be. In fact, waiting around for the perfect play to materialize has been the Leafs’ undoing for far too long. They just need to be better than the Blue Jackets, and Keefe’s changes on Tuesday tipped the scale in his club’s favor.

Unfortunately, more adjustments will be required. Muzzin was injured on an awkward collision late in the game and will miss the remainder of the playoff qualifiers. The veteran may not have been at the top of his game early in the series, but he’s one of the few Leafs with winning experience and was absorbing tough matchups alongside Justin Holl. Travis Dermott, a promising yet inconsistent 23-year-old, is the logical pick to slide in next to Holl. On the third pairing, Martin Marincin or Rasmus Sandin will likely draw into the lineup, and that’s…a scary proposition. The former handles the puck like a grenade, whereas the latter struggled to defend in high-danger areas (44.8 HDCF%) despite a sheltered role in his rookie season. Then again, Keefe may well ice seven rearguards since the fourth line hasn’t seen much action through two games.

At any rate, Toronto’s bench boss is showing why general manager Kyle Dubas has such faith in him. Keefe is fallible just like any other coach. Unlike his predecessor, however, he’s willing to acknowledge his mistakes and make the necessary tweaks before it’s too late.

What a change of pace.