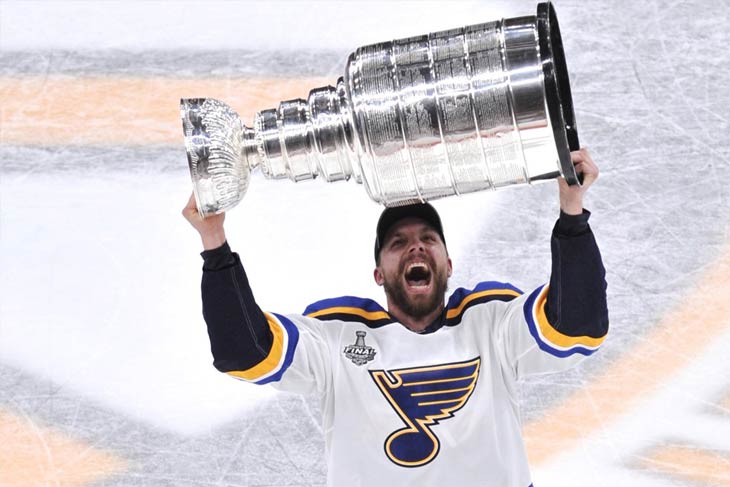 Well…that was quite some ride. After more than eight months of bruising action the 2018/19 NHL season is now history with the St. Louis Blues winning their first ever Stanley Cup with a seven-game victory over the Boston Bruins on June 12th.

The Blues took advantage of their opportunities and rode the hot hand of goaltender Jordan Binnington to win the cup right in Boston. In fact, St. Louis were nothing short of road warriors during the postseason with a 10-3 record including three wins at TD Garden in Boston in the final series. They are the seventh team to win a trio of road contests in the Final and the first since the New Jersey Devils in 1999/2000.

Many fans figured they had blown their chance at the trophy after falling 5-1 at home in game six. However, they looked solid in the deciding contest and other than one two-minute minor for delay of game they stayed out of the penalty box.

The Blues survived Boston’s early onslaught in before center Ryan O’Reilly opened the scoring at the 16:47 mark of the first period. The goal tied a Wayne Gretzky record which was set back in 1984/85 as it meant he had scored in his fourth straight game of the Final series.

Blue liner Alex Pietrangelo doubled the lead with just 7.9 seconds left in the stanza when he skipped past Brad Marchand, who then inexplicably left the ice on a line change, and beat Tuukka Rask with a high backhander. There was no scoring in the middle frame and the Blues put things away in the second half of the third period on goals by Zach Sanford and Brayden Schenn. Rask was then pulled in favor of an extra attacker and defenseman Matt Grzelcyk managed to break Binnington’s shutout late in the game. It was the only one of the Bruins’ 32 shots to find the back of the net.

The first goal was crucial as there hasn’t been a lead change in game seven of a Stanley Cup Final since 1986/1987 when the Edmonton Oilers downed the Philadelphia Flyers. Also, no team has come back from being down by two goals in game seven of a Final for 48 years. The Montreal Canadiens managed it in 1970/71 when they trailed the Chicago Blackhawks 2-0 and won 3-2.

The Stanley Cup triumph comes 52 years after St. Louis entered the NHL in 1967/68 during the league’s first expansion phase. They managed to reach the Final in their first three seasons by winning the Western Division but were swept in all three series. The Montreal Canadiens handled them the first two times with the Bruins beating them in 1969/70. This means the Toronto Maple Leafs own the longest Stanley Cup drought as they haven’t won the title or even made it to the Final since last winning it in 1966/67.

Everybody knows the Blues’ story by now as they owned the worst record in the 31-team league in early January at 15-18-4. They then went on a tear to make the playoffs and put together a franchise-record 11-game winning streak in February and finished the campaign at 45-28-9 to rank 12th overall. At the time, their odds of winning the Stanley Cup were pegged at 250 to 1. One fan named Scott Berry actually bet $400 on the Blues at that juncture and raked in $100,000 after game seven. The team’s season slowly began to turn around when Craig Berube replaced the fired Mike Yeo as head coach in November and Binnington was brought up from the minors several weeks later.

O’Reilly and Binnington were the top two candidates for the Conn Smythe Trophy as the most valuable player in the playoffs and the honor went to O’Reilly. He put together a six-game point-scoring streak in the Final and ended it with five goals and four helpers. He and set a new franchise record for points in a single postseason with 23 on eight goals and 15 assists. He also scored the opening goal in four straight games for his team in the Final to become the first player to achieve that feat in 53 years. As for Binnington, he becomes the first rookie in league history to win 16 playoff games in one season and tied the record for most road wins at 10.

It took the Blues 4,046 regular season and 391 playoff games to win the Cup. The victory came in their 42nd postseason appearance and it took 72 total series to hoist the trophy. They became the fourth consecutive club to win the title on the road and the ninth in the last dozen seasons. The Cup has now been won 43 times out of 100 by the visiting team in league history.

The Bruins’ Marchand co-led the playoffs in scoring with O’Reilly with nine goals and 14 assists for 23 points in 24 games. Forward Logan Couture of the San Jose Sharks had 14 goals in 20 outings and Robin Lehner of the New York Islanders had the best save percentage at 93.6 in eight games as well as the best goals-against average at 2.00. The Bruins owned the best power-play in the postseason at  32.4 per cent while the Dallas Stars’ penalty-killing was tops at 94/6 per cent. The Vegas Golden Knights led the way in goals-per game at 3.57 while Boston allowed only 2.12 against.

The 2018/19 season was a roller coaster ride as several of the Stanley Cup favorites were knocked out of the playoffs early, including the reigning cup holders the Washington Capitals and the President’s Trophy-winning Tampa Bay Lightning. The Calgary Flames, who were the top seed in the west, also took it on the chin early on.

Even though the season has just wound up you may be interested in who the favorites are to lift the trophy next season. According to NBC Sports, the oddsmakers list the Tampa Bay Lightning at 6/1 with the Vegas Golden Knights at 7/1. The Bruins, Toronto Maple Leafs and Colorado Avalanche are all 10/1. The Blues are 14/1 with the Sharks and Winnipeg Jets 16/1 while Calgary, the Pittsburgh Penguins and Washington are 20/1.