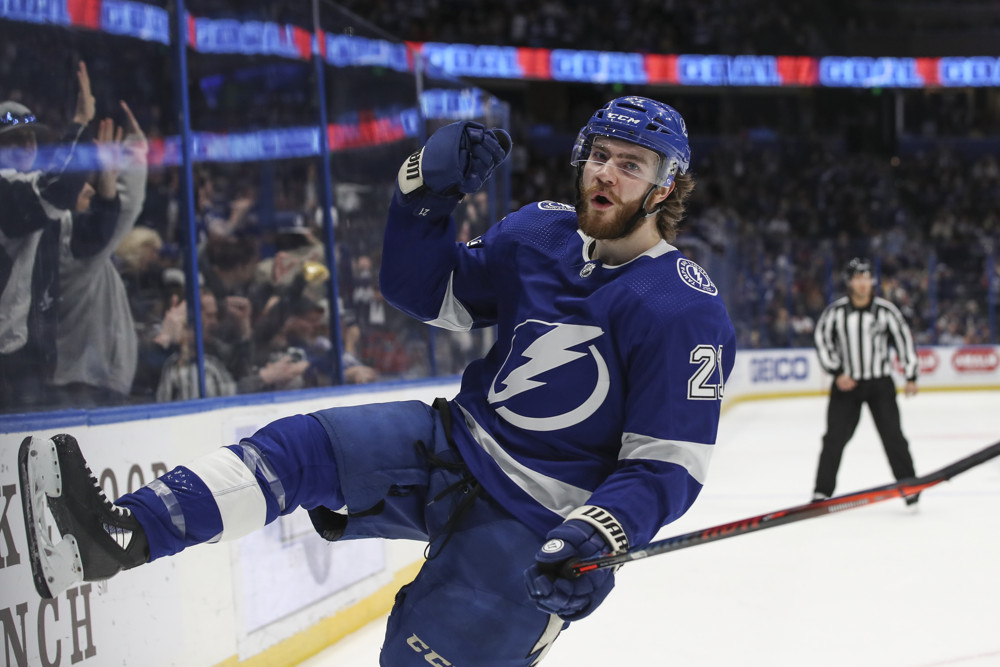 Following one of the most embarrassing sweeps of all time, the Tampa Bay Lightning roared back with a vengeance in 2019-20.

Last season’s first-round loss to the Columbus Blue Jackets was clearly still on their minds this summer, and it remained firmly entrenched there even after they dispatched John Tortorella’s men in five games. This was a different, deeper and more diligent squad—one that wouldn’t fold in the face of adversity but would welcome the heat of the playoff crucible. The Lightning became the first team since the 2007 Ducks not to lose back-to-back games throughout the postseason:

And make no mistake: There were opportunities to crumble around every corner. Captain Steven Stamkos played a mere 2:47 over the entire postseason, which severely weakened the second line. Tampa Bay’s first game of the playoffs, a 3-2 quintuple-overtime win, consisted of the Blue Jackets basically waiting for the Lightning to shoot themselves in the foot. Tampa Bay eliminated all of its Eastern Conference opponents in overtime. Then it ran into a Dallas Stars club that seemed built to defy the odds. It owned 49.0% of the expected goals (13th) and was outplayed for most of the playoffs yet still managed to send three quality teams packing. If there was one obstacle that would prove whether the Lightning had truly turned a new leaf, it was Rick Bowness’ group.

Tampa Bay left no doubts whatsoever on Monday night by pitching a 2-0 shutout against the Stars to win the Stanley Cup. Though it wasn’t the sort of high-octane game neutral observers may have wanted, it was a perfect close-out performance that demonstrated just how much Jon Cooper’s men have progressed. By the end of the second period, the team had established a 2-0 edge and conceded eight shots.

Frankly, Game 6 had the feeling of a franchise exorcising demons that had piled up over many agonizing years. In fact, one Reddit user cobbled together the striking parallels between Duncan Keith’s Cup-winning goal against the Lightning in 2015 and Brayden Point’s championship-clincher on Monday night.

That started with the existing core. No player exemplified this transformation better than Point. The 24-year-old was banged up and out of sorts last season, mustering a single point and no even-strength production in four games against Columbus. This year? He led the entire league in even-strength scoring and goals. Among players with at least 200 minutes logged at 5-on-5, Point was far and away the most productive per 60 minutes. Among the scoring leaders, no one even sniffed his 88.9 individual points percentage. In other words, he drove the bus up front.

Moreover, he’s a complete center who will anchor his club’s forward corps for the next decade. Point isn’t a pure shutdown pivot, but he continually puts his club in better positions—whether that’s by diffusing the opposition’s forecheck or staving off defenders to extend his own team’s attack. In Game 6 alone, he made a series of understated plays that were integral to victory:

Similarly, Victor Hedman shook off an injury-plagued 2018-19 tournament to earn playoff MVP honors. Despite an up-and-down Stanley Cup Final, Tampa Bay’s pillar on the back end was largely incredible this summer. He leveraged every bit of his speed and 6’6”, 229-pound frame to smother opponents in his zone and impose his will on offense. As a result, the Lightning claimed 70.6% of the goals scored during his shifts.

Of course, you can’t win a title without solid goaltending either. While Andrei Vasilevskiy (1.90 GAA, 92.7 SV%) wasn’t a proper Conn Smythe candidate, he overcame his own playoff bugaboos and pulled his weight. On such a well-constructed club, all he needed to do was stop the stoppable bids—and he did that and more.

With the score 2-0 in the third frame on Monday night, he made a couple of acrobatic saves to deny any thought of a Stars comeback:

This year, Tampa Bay could stick to the program because there was a calming presence between the pipes. Vasilevskiy would be there to stand his ground when called upon. Consequently, the Lightning posted a 10-0 record when leading after the first period.

Personnel changes were also key to the Lightning’s turnaround. General manager Julien BriseBois realized that his roster needed to be tougher to play against, so he brought in veterans Blake Coleman, Barclay Goodrow, Patrick Maroon, Zach Bogosian and Luke Schenn.

While they offer a healthy dose of physicality, the aim was primarily to ice a more competitive group of forwards who could keep up with the other team’s top six and make every shift a trying one. Yanni Gourde partnered with Coleman and Goodrow to deliver that exact dimension, buzzing around the rink and disrupting opponents by virtue of always being right in their grill.

This minute-long forechecking shift is a prime example of what the club was lacking a year ago:

Over time, Tampa Bay’s opposition grew weary of facing that unit. In Game 6, Corey Perry just…gives up on the puck because he feels Gourde bearing down on him:

On the strength of this trio’s energy and tenacity, every player in the lineup seemed to grow an additional inch or two and put on 10 more pounds. They were emboldened. There was a greater willingness to battle in every phase of the game.

After—and due to—years of bitter failure, Tampa Bay finally assembled the ingredients to reach the mountaintop. The headliners were driven by their recent humiliation, the forward corps was heavier and more persistent in the trenches and the entire group was prepared to lay it all on the line for a chance to hoist the Stanley Cup. Tell me this isn’t championship-level sacrifice:

The Lightning would stop at nothing to atone for their failures, and in the end, nothing could stop them. Over the course of 25 games, they had a chip permanently fixed on their shoulder—and it lifted them to new heights.