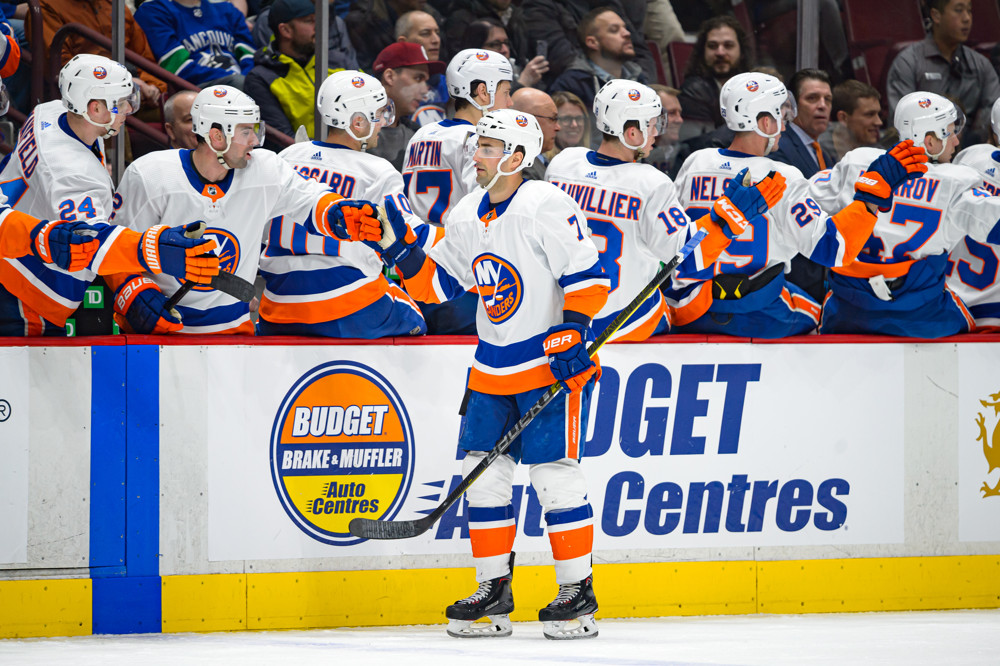 On Tuesday night, the Tampa Bay Lightning did everything in their power to prove that they’ve turned a new leaf and become legitimate Stanley Cup contenders.

Despite owning 59.3% of the scoring chances, 66.7% of the high-danger opportunities and 61.3% of the expected goals, it wasn’t enough. They fell short of those expectations in a 2-1 double-overtime loss. Now the New York Islanders enter Game 6 of the Eastern Conference Final with renewed faith in their abilities.

Tampa Bay’s task has just become that much more difficult.

To be clear, Jon Cooper’s men played a stellar contest for the most part. They dominated the trenches and peppered Semyon Varlamov with quality looks throughout the game. However, games are won and lost on actual goals—and they could only muster one. It felt as though the Lightning’s finish disappeared when Brayden Point was ruled unfit to play. Tampa Bay skated circles around New York’s defensive zone and continually banged on the door, but it couldn’t produce the vital touch that Point has so often provided this summer.

Right from the outset, the Lightning’s speed appeared to fluster the Islanders:

Tampa Bay’s breakout is flawless on this sequence, with quick, accurate passes allowing the players to attack New York with a head of steam. Kevin Shattenkirk blows by Anders Lee, cuts into the middle of the ice and forces Cal Clutterbuck into a slashing penalty.

On the ensuing power play, Nikita Kucherov freezes the penalty-killers with a clever fake that opens up a seam for Mikhail Sergachev to try his luck stick side:

Barry Trotz’s squad stayed on its heels throughout the game. There was very little pushback, and odd lineup decisions—such as slotting Clutterbuck alongside Mathew Barzal—prevented the Islanders from making any sort of headway on the offensive end.

Late in the second period, their sloppy play nearly cost them dearly.

Veteran pest Leo Komarov attempts to level Ryan McDonagh below the goal line…but he takes out his teammate Jean-Gabriel Pageau instead. Tampa Bay is thus granted the numbers and space to generate a Grade A look. Unfortunately for the Lightning, Zach Bogosian is the recipient of their crisp passing and the 30-year-old rings iron from prime real estate:

From that point on, it felt as though the game revolved around Kucherov. Tampa Bay’s most skilled—but not necessarily its best—forward enjoyed chance after chance in tight during the second half of the contest.

Early in the third frame, Victor Hedman steals the puck from Josh Bailey and feeds the Russian star in tight:

In the waning moments of overtime, it’s Anthony Cirelli’s turn to strip an Islander of the puck. Kucherov gets a tremendous opportunity by the lip of the crease but flubs his shot wide, forcing a second extra session:

Those hiccups defined his performance in Game 5. Though he was constantly around the puck in high-danger areas, he could never quite find his shot. On the one occasion where he did conjure some magic and make the right decision, he slid the puck off the post:

It goes without saying, but the Lightning’s offense just isn’t the same without Point. His boundless energy, hockey sense and knack for navigating the trenches despite his diminutive frame (5’10”, 166 lbs) were sorely missed on Tuesday. Kucherov, in particular, appears to need his center to uncover more room in the offensive zone and bring the action to the opposition’s front door. In the two games that Point has missed this series, Tampa Bay has produced four goals. When he has suited up, the team has scored 14 goals in three contests.

Without his killer instinct—he has two overtime winners in the postseason after all—to rely on, the Lightning failed to capitalize on a New York outfit that was running on fumes. Varlamov may have stopped 36 of 37 shots, but would anyone argue that he stole the game? How many of those bids really tested him? After maneuvering into scoring position, Tampa Bay often fired straight at his crest.

Furthermore, the club eventually slipped into old habits. Frustration set in and cracks began to reveal themselves. There was a growing sense that New York could indeed outlast its opponent on this night.

Early in overtime, Hedman falls asleep at the wheel and gifts Barzal a short breakaway:

Andrei Vasilevskiy (1.88 GAA, 93.0 SV%), who’s delivered the strongest postseason of his career to this point, stoned the Islanders’ biggest threat. Tampa Bay was still feeling generous, though. In double overtime, the Lightning send out Shattenkirk and Sergachev for an offensive zone draw. Cooper is understandably trying to win the game. However, Shattenkirk botches his shot attempt and the Islanders are off to the races:

Sergachev then displays how not to defend a two-on-one rush, challenging the puck-carrier and allowing Lee to feed Jordan Eberle for the season-saving goal.

In the end, New York offered a lackluster effort in an elimination game and still came away victorious. One has to assume the Islanders will look much more prepared and dangerous in Game 6. Sure, Point will likely return too, but his health status remains unclear. He seems to be nursing both upper- and lower-body issues at present, and the Islanders will surely pay him special attention should he play.

This was the Lightning’s best chance to put the Islanders away, and they let it slip through their fingers. Now they’ve got a real dogfight on their hands.