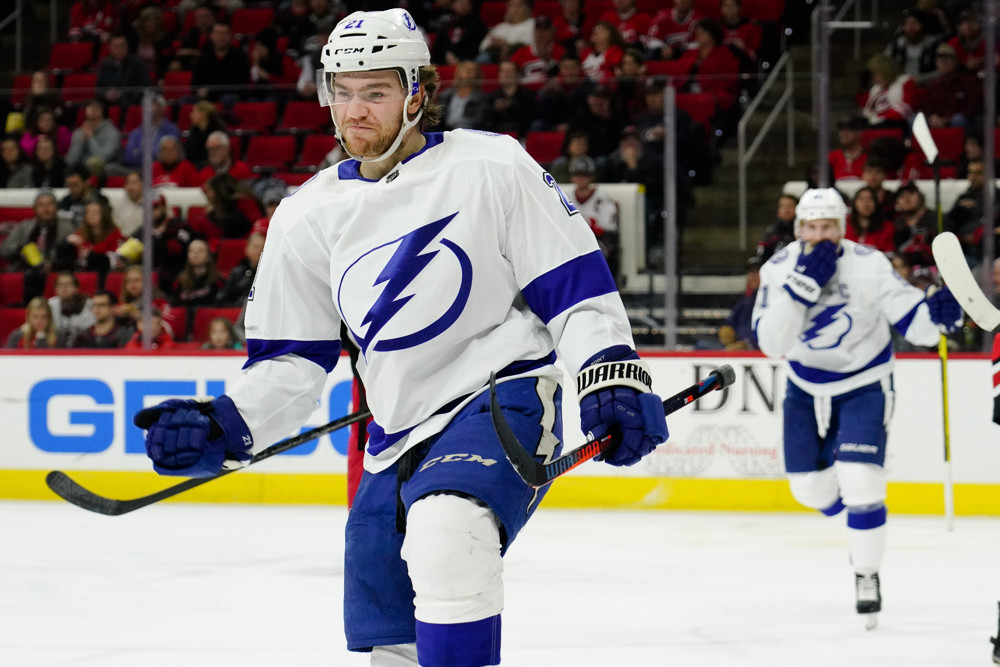 John Tortorella’s club came storming out of the gates to jump all over a Lightning squad that had little to offer outside of turnovers and blown coverage. While Tampa Bay ultimately grinded out a 3-2 quintuple-overtime win, its listless, undisciplined start was eerily reminiscent of the team that was swept by these very Blue Jackets a season ago.

Following that sequence, McDonagh slips up again—this time literally—creating a mess on Tampa Bay’s end that results in a great chance for Liam Foudy:

Head coach Jon Cooper must have thought he was trapped in a nightmare. Everything that could go wrong seemingly would.

And much like in Columbus’ playoff qualifiers against the Toronto Maple Leafs, this string of unforced errors played right into Tortorella’s game plan. The Blue Jackets are well aware they can’t match Tampa Bay’s firepower, but they can hunker down, frustrate their more talented opponents and capitalize on their subsequent blunders. They followed that exact blueprint to dispatch the Lightning last spring.

But then the unthinkable happened: Tampa Bay got its own fortuitous bounce. Nikita Kucherov’s rebound bid caromed off Brayden Point’s leg and past Joonas Korpisalo to tie the game 1-1:

Just when it seemed as though the Lightning could finally exhale and play the game, another question mark reared its ugly head.

On paper, Vasilevskiy is the prototypical modern netminder. The 26-year-old is quick, rangy and positionally sound. However, he’s also allowed his share of backbreaking goals in his postseason career.

That happened once again on Tuesday when Oliver Bjorkstrand fired a long shot over his shoulder in the final minute of the second period:

Columbus doesn’t give anything away for free, so conceding a late tally on a low-quality look was devastating. The 2018-19 Lightning would have surely folded in the face of that adversity, but this year’s group feels different. They keep plugging away.

Seconds into the final frame, they were rewarded for their sustained effort:

Barclay Goodrow negates an icing call and establishes possession, Yanni Gourde wreaks havoc in front of Korpisalo and the goaltender unwittingly knocks the puck into his own net to level the score.

Vasilevskiy eventually settled in between the pipes, stopping all 48 of Columbus’ shots to end the game. It wasn’t always pretty, but he did enough to keep his team alive.

Shift by shift, Tampa Bay built on that momentum. There weren’t necessarily any highlight-reel sequences, but the Lightning were putting themselves in position to succeed against a stingy opponent. Remember, Columbus ranked third defensively during the regular season and surrendered just 10 goals in five games against the Maple Leafs.

In the first overtime period, Killorn demonstrated why you have to work for your opportunities:

After Boone Jenner regains possession, Killorn undercuts him to extend the attack, continues hounding the puck and ends up with a great look in prime real estate.

The fourth line (Maroon, Cedric Paquette, Mitchell Stephens), for its part, bullied Columbus in the trenches. The longer the game wore on, the less interested the Blue Jackets became in handling Maroon’s 6’2”, 236-pound frame down low. Over and over again, his strength on the puck generated chances for his club:

Combining that type of tenacity and grit with the club’s raw skill is the Lightning’s path to victory in this series. Simple, smart, fast-paced hockey. Don’t overdo it with the extra pass. When you have time and space, which isn’t often against the Blue Jackets, shoot.

In the fifth overtime session, Point hopped on a loose puck and whistled it by Korpisalo to cap off a historic game:

To be clear, Tampa Bay wasn’t flawless by any stretch of the imagination. There were a few too many breakdowns early on and some of the forwards fell short. Kucherov, Tyler Johnson and Blake Coleman gave the puck away cheaply throughout the contest and will absolutely need to find their game as the series progresses.

However, the team’s construction afforded it a chance to win despite key players failing to show up. The Lightning’s bottom six was stellar in Game 1, leading by example through its hustle and smarts. Granted, it didn’t hurt that Victor Hedman wasn’t, well…hurt. While the towering blueliner left the club’s last round-robin game with a lower-body issue, he appeared no worse for wear on Tuesday night. He logged 57-and-a-half minutes of ice time and displayed nearly impeccable decision-making with the puck. This allowed Tampa Bay to attack in waves rather than one-and-dones. When Hedman was on the ice—which was a lot—his team owned 31 of the 42 scoring chances.

This wasn’t a one-man show, though. The Lightning rallied around each other and produced a performance they wouldn’t have sniffed a year ago.

They controlled 68.4% of the scoring chances and 67.7% of the high-danger bids. They dominated proceedings, yet the game remained tied until the fifth overtime period. It was the fourth-longest game in NHL history. As the game sank further into additional frames, you got the sense the Blue Jackets had the Lightning right where they wanted them. They would stay in their shell and wait for Tampa Bay to commit that one fatal error.

It never came. There were plenty of chances for the Lightning to falter when the going got tough, but they dug deep and gutted out a win.

Now Columbus knows it’s in for a fight.