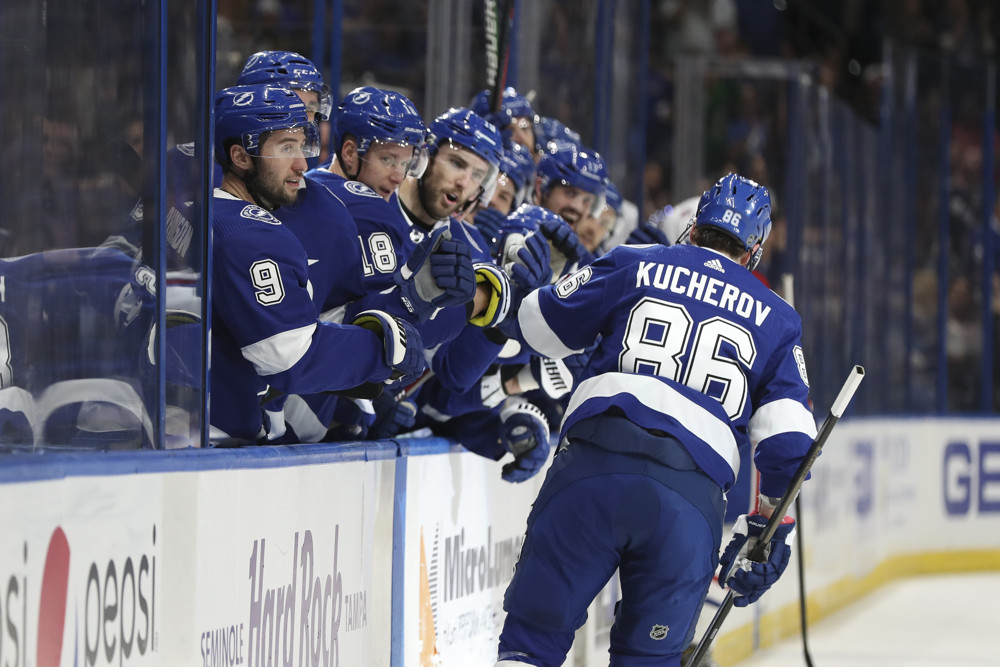 If it wasn’t already clear after they eliminated the Columbus Blue Jackets and Boston Bruins, there’s something different about this year’s Tampa Bay Lightning. They haven’t necessarily gotten any more talented. In fact, the absence of captain Steven Stamkos (lower-body injury) has significantly hamstrung the second line’s production. However, that bit of long-term adversity feels like a microcosm of Tampa Bay’s new DNA: It no longer collapses at the first sign of duress. It powers through it.

With equal measures of jaw-dropping skill and unwavering determination, Jon Cooper’s group is now equipped to prevail under any circumstances.

In Game 1 of its Eastern Conference Final matchup against the New York Islanders, Tampa Bay faced a tired opponent that granted it far too much space. The Lightning, in turn, granted them no mercy whatsoever. They owned a 3-1 lead at the first intermission and potted another five goals before the contest was over. The Islanders had no answers for the top unit of Brayden Point, Nikita Kucherov and Ondrej Palat in particular, which buzzed around the offensive zone and produced 11 points on the night. By the third frame, Point and Kucherov were downright globetrotting:

Though New York is certainly a deserving conference finalist, it had faced the lethargic Washington Capitals and Philadelphia Flyers in the previous two rounds. Game 1 was a rude awakening: The Lightning bring a whole other level of speed to the table.

Make one mistake, such as a forechecker letting his defenseman get by him, and Tampa Bay is off to the races before you can recover:

In fairness, that was merely the series opener. The Islanders would surely bounce back in Game 2. They did offer head coach Barry Trotz a more spirited effort on Wednesday, drawing first blood not even 90 seconds in and outshooting the Lightning 13-4 in the first period. Alex Killorn didn’t help the Lightning’s cause when he was ejected for a cheap shot on Brock Nelson, putting his club on the penalty kill for five minutes just as New York was gaining momentum.

To make matters worse, Point was injured at the end of the period. He returned briefly only to leave the game for good in the second frame. This was a recipe for disaster—the sort of scenario in which Tampa Bay had imploded in the past.

But just like in the conference semifinals, when Boston forced overtime on two occasions, the Lightning kept their cool and got the job done.

While Point has indeed become the club’s most important forward, Victor Hedman is its most important player by a fair margin. The 29-year-old blueliner is Tampa Bay’s ace in the hole. There’s simply no stopping a 6’6”, 229-pound mammoth who skates well, possesses great instincts and plays in all situations. This isn’t a new-school prodigy who skips the penalty kill so he can stay fresh at even strength either. Hedman is up for any challenge. Take a look at his remarkable anticipation on New York’s 5-on-3 power play:

And when he gets downhill and decides to press for offense, there really isn’t much opponents can do. Late in the second period, he just imposes his will on the Islanders:

In addition to his 1-1 goal, it was Hedman’s calm under pressure that pulled Tampa Bay back into the contest. From the second period onward, the Lightning controlled 61.9% of the scoring chances and 63.6% of the high-danger opportunities. Even with Killorn’s ejection, Point’s injury and New York’s tenacious forecheck, the veteran steadied his troops and allowed them to flex their battle-readiness. They’re hungrier. They’re tougher. They’re stronger at the point of attack.

Trade deadline acquisition Barclay Goodrow highlighted those traits in the third frame. Whereas last year’s Lightning stayed clear of the trenches, the big winger barrels into them, chasing down his own dump-in and regaining possession against two Islanders (one of whom is 6’5”, 223-pound Scott Mayfield) to give Tampa Bay a series of quality bids:

That sense of urgency translated to the defensive end as well. Following Kevin Shattenkirk’s hopeless hip check attempt with about two minutes remaining in regulation, Yanni Gourde busts his tail to make a heroic pass break-up on a 3-on-1 Islanders rush:

As if the hockey gods were rewarding him for his hustle, Gourde found himself on the ice for Kucherov’s game-winner with nine seconds left. The Lightning swarmed around New York’s net. First, Gourde was foiled on the backhand. Then Palat missed from the slot. Finally, Ryan McDonagh threaded a pass to Kucherov, who deftly one-timed it to cement Tampa Bay’s 2-0 series lead:

In all honesty, this was the kind of ugly, tight-checking 2-1 affair the Lightning would have lost in previous seasons. From penalties to injuries, they seemingly couldn’t catch a break—and the Islanders were waiting for Tampa Bay’s meltdown.

These are not the same fragile underachievers, though. Last season’s bitter first-round disappointment lit a fire under their belly, and general manager Julien BriseBois added the right ingredients (Goodrow, Blake Coleman, Zach Bogosian, Luke Schenn) to stoke those flames throughout the summer. They can now freewheel or rein it in when necessary. By combining their top-flight skill with a healthy dose of dirty work, they’ve steeled their resolve.

They’re prepared to take on all comers.