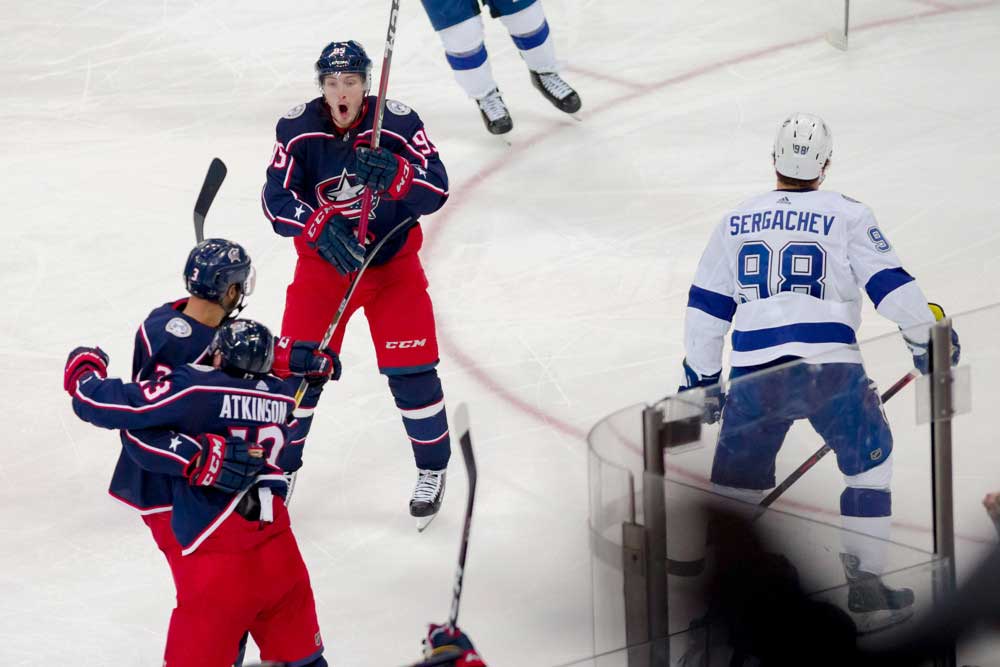 45 seconds into Game 4 of the first-round series between the Tampa Bay Lightning (62-16-4) and Columbus Blue Jackets (47-31-4), Ryan McDonagh took a slashing penalty. Less than two minutes later, Alexandre Texier opened the scoring for Columbus. About a minute after that, Pierre-Luc Dubois doubled the home team’s lead. While Tampa Bay managed to tie the contest in the second period before eventually falling 7-3, that initial flurry put the Lightning behind the eight ball from the start.

It was also a microcosm for the entire series: Jon Cooper’s squad simply couldn’t get up in time to compete with a hungry opponent, and it paid for its languor by being swept…in the first round…in a year when it was viewed as the front-runner for the Stanley Cup.

In addition to slow starts, injuries along the blue line, bad habits spilling over and a suspension to a star forward conspired to take down one of the greatest regular season teams of all time and shock the hockey world. Everything that could go wrong for Tampa Bay seemingly did. It truly was a perfect — and lethal — storm.

Now, there’s no denying the impact of Victor Hedman’s health issues. The reigning Norris Trophy winner is an integral component of the club’s offense and a formidable defender when he puts his mind to it. However, he appeared to return too soon from an upper-body injury and was an absolute mess in his two playoff appearances against the Blue Jackets. His usual pace and composure with the puck were replaced with a constant stream of turnovers and blown assignments. The back end was nowhere near as stout without its 6’6”, 223-pound cornerstone in midseason form.

Anton Stralman (lower body) didn’t suit up for a single game either. Though the 32-year-old is no longer quite as steady, the Lightning missed his all-around utility.

Nikita Kucherov didn’t help matters with his selfish, dirty hit on Markus Nutivaara in Game 2. A short fuse is understandable, especially when you’re the likely MVP and struggling to replicate that success in the first round. However, he had an eternity to consider his actions after tripping the Blue Jackets defenseman and still crushed his head into the boards.

Beyond his one-game absence, that decision set the tone for a group that desperately needed a leader to right the ship. Instead, its superstar winger acted in service of his frustration rather than his team.

With that said, there are no excuses in the postseason. The players who were available needed to get the job done, and they failed to do so — resoundingly. Key forwards Steven Stamkos and Brayden Point were noticeable for all the wrong reasons, as they leaked goals against and produced just three points combined. Ondrej Palat, Yanni Gourde, J.T. Miller and Tyler Johnson didn’t offer much support, while an undermanned defense was exposed over and over again. When role players are your best performers, you’re in serious trouble.

Perhaps their massive lead in the standings and status as the undisputed team to beat in 2018-19 drew out their inner arrogance. Staying grounded when the world crowns you months in advance is no easy task. They had become such a juggernaut that they believed they could defeat anyone without really trying…and they often did.

But the playoffs are a different beast altogether. If you enter the spring tournament at half-speed, opponents that have fought tooth and nail to even get there can blaze right by you. That’s precisely what happened in this series, as Columbus pounced on every giveaway, lazy penalty and lapse in coverage to bury the Lightning before they could ever snap out of their daze. After Tampa Bay built a 3-0 lead in Game 1, it was outscored 19-5. This was the sort of terrifying offense that could drop eight goals on you in a single contest. It mustered eight over the course of four games.

Among the 18 goals that qualified as scoring chances in the series, the Lightning owned just 33.3% of them. They topped the league in that department this year with a 58.3 SCGF%. That steep drop is no unfortunate accident. Hockey is a game of inches and the details are magnified tenfold in the playoffs. Though clubs sometimes get away with sloppiness in the regular season, that usually doesn’t fly in April and beyond. Clearly, it didn’t for a Tampa Bay team that lost any semblance of its structure when it mattered most.

Moreover, that lack of execution at the point of attack put far too much strain on Andrei Vasilevskiy (3.83 GAA, 85.6 SV% in the playoffs). The 24-year-old netminder was already a question mark, as his postseason showings have alternated between sparkling and subpar. In the end, he never stood a chance amid Tampa Bay’s endless turnovers and horrific net-front coverage.

Obviously, the Blue Jackets themselves deserve credit for playing a wonderful series and stepping on the Lightning’s throat when they had the opportunity. Their forecheck was furious and they never looked intimidated by their opponents’ ridiculous skill level. In fact, they seemed to relish the challenge. Matt Duchene (7 points in 4 games) has found his stride and is justifying general manager Jarmo Kekalainen’s gamble to acquire him at the trade deadline. Sergei Bobrovsky (2.01 GAA, 93.2 SV%) has shaken off an up-and-down campaign and is instilling confidence in his troops. Meanwhile, 21-year-old defenseman Zach Werenski is playing the best hockey of his young career.

But it’s hard to argue they’re that good. Entering the matchup, Columbus eliminating Tampa Bay was improbable yet not out of the question. Columbus sweeping the Lightning? That was unthinkable.

Somewhere along the way, it all went off the rails for Cooper’s team. When the playoffs began and it needed to be locked in, it couldn’t flip the switch in time. It wasn’t fully committed to the cause. It wasn’t ready for the level of resistance it faced and completely fell apart at the seams.

In their first real taste of adversity this season, the Lightning didn’t stiffen their spine and summon championship resolve. They folded like a cheap tent.