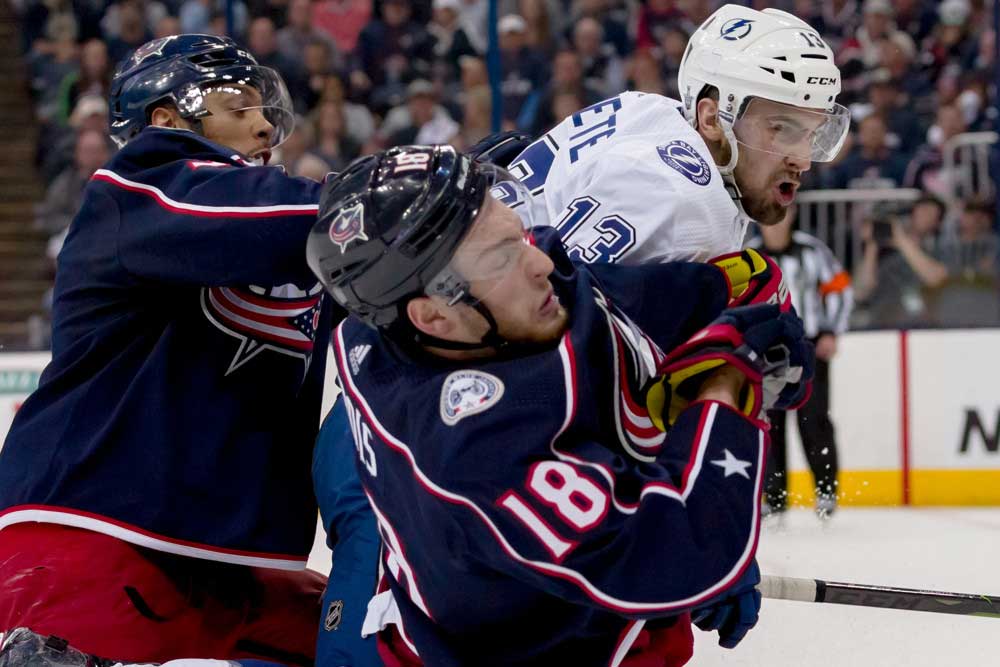 If the Tampa Bay Lightning vs Columbus Blue Jackets playoff series was a boxing match the referee would have just finished counting nine and be on his way to 10 right about now. Sort of like when Buster Douglas defied the odds and beat the daylights out of heavily-favored undisputed Heavyweight Champion Mike Tyson back in 1990.

The Lightning are technically still in the fight, but they have just one more chance to get back to their feet after dropping the first three games of the series.

The odds were stacked against Columbus heading into the playoffs since Tampa topped the league with their 62-16-4 record for 128 points and tied an NHL mark for wins. They led the league in scoring and had the most punishing power-play of at 28.2 per cent. Tampa also owned Columbus during the regular season by sweeping the three-game series and trouncing them in goals 17-3.

Nikita Kucherov took home the Art Ross Trophy with his league-high 128 points and fellow Russian Andrei Vasilevskiy posted 39 wins to lead all goaltenders to give Tampa a further edge and they boast several other stars and scorers such as Brayden Point, Victor Hedman and Steven Stamkos.

Columbus went 47-31-4 this year to place 13th overall and didn’t make the playoffs until the final weekend of the season by grabbing the second wildcard spot in the East.

There were some signs of life in the Blue Jackets though as they went 14-8-1 in the last 23 games and netminder Sergei Bobrovsky finished the season 6-1 with a 94.7 save percentage, three shutouts and and a 1.50 GAA. Many experts predicted Bobrovsky would falter once the postseason got underway though since he had previously gone 5-12 in the playoffs with Columbus with a 3.37 GAA and 89.8 save percentage.

Most fans believed a Tampa win was a given, but some serious thinkers realized it might not be that easy since most Presidents’ Trophy winners historically have run into some trouble in the playoffs. But even so, none of them have ever been swept in the first round before.

There have been numerous first-round upsets in the past such as the 1970/71 Montreal Canadiens taking the Boston Bruins out in seven games. The Habs played a rookie bookworm named Ken Dryden in net and he managed to upset the NHL’s highest-scoring team in history at the time. The Bruins were also the reigning Stanley Cup champions and Montreal missed the playoffs the previous year.

We’ve also witnessed the 1981/1982 Los Angeles Kings upsetting the Edmonton Oilers. That series featured the Miracle on Manchester when the Kings trailed 5-0 in the third period of game three, but came back to win 6-5 in overtime. And who can forget the Detroit Red Wings being upset by the 1993/94 San Jose Sharks and the 2002/03 Mighty Ducks of Anaheim?

We should know by now that regular-season success doesn’t guarantee anything in the playoffs. The last President’s Trophy winner to skate around the rink with the Stanley Cup was the 2012/13 Chicago Blackhawks. The only other league-best clubs to win the cup since the Presidents’ trophy was introduced in 1986 were the 2007/08 Detroit Red Wings, the 2001/02 Red Wings, the 200/01 Colorado Avalanche, the 1998/99 Dallas Stars, the 1993/94 New York Rangers, the 1988/89 Calgary Flames and the 1986/87 Edmonton Oilers.

This means just eight of 32 President’s Trophy winners have gone on to win the Stanley Cup. Eleven  made it to the cup final, while six were beaten in the first round, nine were knocked out in the second round and six others were eliminated in the semifinals. Chicago is the only Presidents’ Trophy winner to hoist the Stanley Cup in the past decade and three winners went home in the first round in the last 10 years with Tampa looking a sure bet to make it four.

Although you need to lose four games to start golfing, Tampa arguably lost their grip on this series in the very first game. They came flying out of the gate and built a 3-0 first-period lead only to see it evaporate before their eyes. Columbus pulled one back in the second period and then struck for three goals in just over six minutes of the third to stun the home side 4-3.

The second game in Tampa was no contest really as Columbus appeared to toy with the Lightning and handed them a 5-1 beating. Kucherov didn’t do his teammates any favors either as he boarded Columbus blue liner Markus Nutivaara while the defender was on his knees on the ice. The league’s top scorer was ejected from the game with 4:26 remaining in the contest and suspended for game three. His absence didn’t help as Columbus won that contest at home 3-1.

Defenseman Erik Cernak is leading the team with three points and they’re all assists and no player has scored more than one goal. In net, Vasilevskiy is playing well below par with an 86.6 save percentage. Tampa also hit a wall when looking for goals last season as they were shut out by the Washington Capitals in their final two games when eliminated in the Eastern Final.

On the other hand, the Blue Jackets’ decision to go all in for the playoffs and keep pending free agents Bobrovsky and Artemi Panarin and acquiring Matt Duchene and Ryan Dzingel is be paying off. Duchene leads the team in scoring with two goals and five points while Panarin has chipped in with a goal and four points. Duchene is also 66 per cent in the faceoff circle in the series. Dzingel has yet to register a point, but Bobrovsky’s save percentage is a stellar 94 per cent.

Columbus gained an extraordinary amount of confidence by coming back in the first game of the series and are now riding sky high. Their odds of blowing the series are very slim.

The Blue Jackets have enough depth and star players to take a serious run at the cup this year and what better way to achieve their goal than to eliminate the favorites in the very first round?

As for Tampa, they might take some solace in knowing Mike Tyson regained a heavyweight crown after being outclassed by Douglas….but it did take him six years to do it.