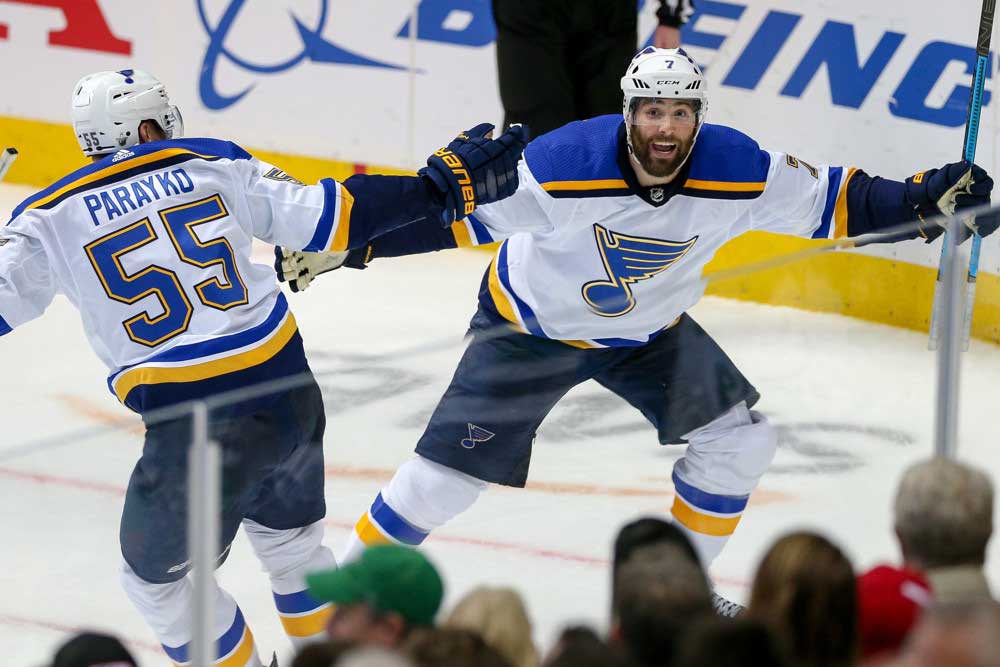 Forget about Mad Max and Mel Gibson, the real road warriors just happen to be the 2018/19 playoff version of the St. Louis Blues. This resilient bunch has yet to lose a game away from home in the postseason and unless this article jinxes them they may continue to roll over the opposition in their own rinks.

The Blues got past the Winnipeg Jets in six games in the first round by winning all three road games to go along with a win and two defeats at home. They now lead the Dallas Stars two games to one in the second round with a win and a loss at home and a victory in the first game in Texas. The recent 4-3 win in Dallas gives St. Louis home ice advantage once again, but they apparently don’t seem to need it with the way they’ve been playing on the road.

The four straight away playoff wins have tied the St. Louis franchise record which was originally set back in 1969. However, they still have some work to do if they hope to break their old mark of six road playoff wins in a postseason which they set in 2015/16. St. Louis was also a fine road team in the regular season with a record of 21-13-7 while going 24-15-2 at home.

Their triumph in Dallas in game three of the series had quite a dramatic ending as the Blues started the third period with a 2-1 lead. The Stars tied it via a shorthanded goal by Andrew Cogliano with 6:54 to go in the third and it looked like overtime may be needed. The Blues retook the lead just 1:18 later when defenseman Alex Pietrangelo scored. Another 1:28 passed by before Tyler Seguin leveled the score for Dallas once again and overtime was looking more likely than ever with 4:08 to play.

It wasn’t to be however as Pat Maroon beat Dallas goalie Ben Bishop with 1:38 left on the clock to give St. Louis their fourth and final lead of the contest. The Stars managed to pull Bishop for an extra attacker and then found themselves up by two men when Colton Parayko was assessed a minor penalty for delay of game when he accidentally flipped the puck into the crowd while trying to clear it. The Blues hung on though and took command of the series and all six of their playoff wins this year have been by a lone goal with none of them coming in overtime.

The 31-year-old Maroon has been effective in the playoffs after notching 28 points on 10 goals and 18 assists in the regular season. He signed a one-year contract as a free agent with his hometown team last summer for a relatively low $1.75 million and has been skating on a line with rookie Robert Thomas and veteran Tyler Bozak in the playoffs. It may be considered a checking line by some, but the trio has chipped in offensively with some timely goals so far and have combined for 10 points.

Blues’ head coach Craig Berube altered his lines somewhat in game three by playing Jaden Schwartz on the top line with center Ryan O’Reilly and winger Vladimir Tarasenko. Schwartz then scored his sixth goal of the playoffs to give the Blues the lead at 1:27 of the first period and assisted on captain Pietrangelo’s third-period goal. He also led his squad with six hits.

As for the Stars, they’re being led by the top line of Tyler Seguin, Alexander Radulov and captain Jamie Benn. Radulov leads the team with five goals while Benn is tops with six assists and eight points and Seguin has won 54.3 per cent of his faceoffs.

The team probably wouldn’t be where it is though if it wasn’t for the play of their second line which consists of Mats Zuccarello, Jason Dickinson and Roope Hintz. They were the reason for the Stars’ 4-2 win in game two as they combined for two goals and five assists.

Hintz was especially strong with two goals and a helper with Zuccarello and Dickinson chipping in with a pair of assists each. Zuccarello was picked up in a deal with the New York Rangers just before the trade deadline and has three goals and four assists in the postseason and is plus-3. Hintz has posted four goals and three assists with a plus-1 rating and Dickinson has contributed two goals and two assists and is also a plus-1.

The Seguin line has notched 10 goals and 12 assists for 22 points while going plus 11 and the second line has eight goals and nine assists for 17 points with a plus-5 mark. This is exactly the type of secondary scoring a team needs to succeed in the postseason and the Stars have been fortunate enough to be receiving the extra help up to now.

For Hintz and Dickinson it’s their first kick at the can when it comes to NHL playoff hockey and they haven’t looked out of place or been in awe at all. On the other hand, the 31-year-old Zuccarello has plenty of experience with 14 goals and 38 points in 69 postseason encounters. The 22-year-old Hintz posted nine goals and 22 points in 58 games during the regular season and was a minus-11. The 23-year-old Dickinson registered six goals and 22 points in 67 contests with a plus-9 rating.

Hintz and Dickinson both have American Hockey League playoff experience though and performed well with Texas last season. Hintz racked up four goals and eight assists in 22 postseason games last year and Dickinson registered two goals and eight helpers to help Texas reach the Calder Cup final. Dallas head coach Jim Montgomery told the press he believes last season’s experience with Texas has certainly gone a long way in the development of the two youngsters and they know how to deal with the pressure of playoff hockey.

The St. Louis vs  Dallas series looks like it still has a long way to go since the teams are pretty evenly matched. If it does come down to home-ice advantage in game seven then it will go to the Blues. But if their road winning streak continues it won’t be needed as it could possibly be all over in five or six.