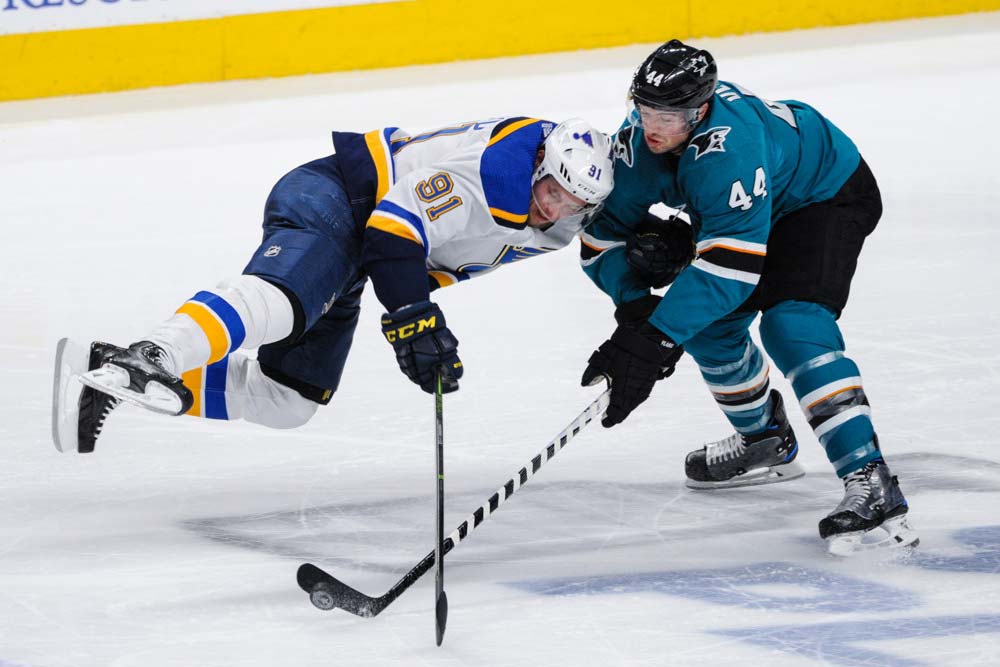 On the winger’s second shift, he entered the offensive zone with possession, fended off a defender and imposed a cycle on the San Jose Sharks. Though a fortunate bounce resulted in Jaden Schwartz’s opener, this was a case of a team making its own luck with good decisions.

Unfortunately, his next appearance wasn’t quite as effective. With a power play opportunity to double the club’s lead on the road, Tarasenko got caught flat-footed as a pair of Sharks blazed by him at the blue line. Barclay Goodrow came within inches of tying up the contest on the ensuing rush.

That was a recurring theme in Game 2 of the Western Conference Final: The Blues regularly alternated between executing and undermining their game plan. Most of San Jose’s chances stemmed from St. Louis’ mental errors rather than its own skill and creativity. While the talented Sharks had an uncharacteristically quiet night, they still managed to test Jordan Binnington in tight because Craig Berube’s men couldn’t stop turning pucks over.

Oddly enough, most of those giveaways came courtesy of players who would typically opt for the safe choice. Joel Edmundson and Robert Bortuzzo aren’t known for their soft hands, yet they repeatedly tried to feather passes through opponents. On more than a few occasions, the last man back — which is to say the last person who should be taking those risks — was the culprit.

Stellar goaltending and some desperate recoveries bailed the Blues out, but they can’t keep sabotaging their own efforts. The Sharks are just too dangerous for that.

If you were seeking further evidence that San Jose only needs a sliver of daylight to make you pay, see Game 2. St. Louis worked its tail off to establish a 2-0 lead and controlled 62.5% of the high-danger opportunities in all situations. That was nearly inconsequential, as a pair of gaffes led to a pair of goals by Logan Couture (19 points in 16 games) within a two-minute span. First, captain Alex Pietrangelo gift-wrapped a puck for him at the offensive blue line and the leading scorer in the playoffs converted on the shorthanded breakaway. There was no deception or air on Pietrangelo’s pass. There was no hope of completing it.

Moments later, Couture found the equalizer when he was sprung loose on a sloppy line change by the Blues. Schwartz tried to sneak through two Sharks defenders instead of chipping the puck in. Then, Pietrangelo — once again on the wrong end of a goal — failed to diagnose the play and hustle back in time. That extra half-second afforded Couture the room he required to race down on Binnington and fire a shot through the wickets to reignite the home crowd.

It was a disastrous turn of events.

Thankfully, there were positive developments for St. Louis as well. Binnington shut the door on San Jose with some key saves down the stretch. He faced an ordinary total of 26 shots, but his performance between the pipes was arguably the biggest factor in his team’s 4-2 win on Monday.

Beyond the crease, Berube’s troops showed flashes of why they should put up a solid fight in the third round. To borrow a basketball term, every time the Blues entered their “halfcourt offense,” San Jose came apart at the seams. This is a squad that loves to play with the puck. Keeping tight gaps and sound positioning is nowhere near as enjoyable, and when St. Louis forced Peter DeBoer’s team to hunker down, it grew impatient. It began to chase the puck-carrier and got crossed up in coverage, resulting in a number of quality chances for the Blues.

Aside from Oskar Sundqvist’s 4-2 marker, St. Louis’ goals were all generated on the cycle. Look how porous San Jose’s defense was on Bortuzzo’s game-winner:

Tyler Bozak was granted an eternity in the middle of the ice to make his read and Kevin Labanc was miles away from Edmundson. This gave the blueliner ample room to send a pass to Bortuzzo, who beat Joe Thornton to the slot and deftly lifted a backhand by Martin Jones for a dagger late in the second frame.

In case you couldn’t tell, these guys don’t like defending. So make them. Get pucks below the goal line, keep your feet moving and lean on the Sharks. Shift the action from low to high and look for screens, tips and rebounds.

St. Louis’ bottom six did just that in Game 2 and delivered a wonderful performance. Bozak, Robert Thomas and Patrick Maroon remain solid contributors and cycle specialists who had their way with San Jose along the boards. They owned 60% of the scoring chances and high-danger bids for an expected goal share of 65.0% at 5-on-5. The fourth line of Sundqvist, Ivan Barbashev and Alex Steen (62.5 SCF%, 100.0 HDCF%, 85.0 xGF%) took it one step further by dominating the trenches, continually outworking the Sharks in the dirty areas to create chances in close quarters. In the end, their diligence paid off with the insurance goal that sealed the deal.

The head coach also deserves credit for a key lineup tweak. Since Colton Parayko and Jay Bouwmeester were floundering in their shutdown assignment (47.7 CF%, 44.9 SCF%, 41.2 HDCF%, 41.2 xGF%), Berube replaced Parayko with Pietrangelo. The Blues captain had a rough outing, but the wrinkle freed up Parayko to embrace a more offensive role alongside Vince Dunn. St. Louis’ bench boss knows how to attack San Jose, and he adapted accordingly by putting his best shooter from the blue line in a position to unload a barrage on Jones.

The result? Parayko led the team in shot attempts, scoring chances and high-danger bids. He hit two posts on the night. Dunn was a hair behind in those categories and netted the 2-0 goal on a screened wrister.

Every single one of their shifts together looked identical. They exchanged crisp lateral passes and consistently found shooting lanes, while the forwards focused on retrieving pucks and disrupting Jones with net-front traffic. All that movement and chaos in the trenches threw San Jose off, slowing the tempo and frustrating a Sharks group that wanted nothing more than to barrel down the ice in hopes of creating offense.

Considering San Jose’s level of talent, the Blues will inevitably find themselves on their heels at one point or another. They can’t lose sight of their structure when that happens, though. As the less dynamic team in the series, allowing players to get behind them or attempting low-percentage passes is downright silly.

Losing because you’re overmatched is acceptable. Losing because you rolled out the red carpet for your opponents is much tougher to swallow. It’s obviously easier said than done, but from St. Louis’ perspective, it must be done: Make them earn every inch of ice.

If the Blues keep playing with fire, their season will go down in flames.