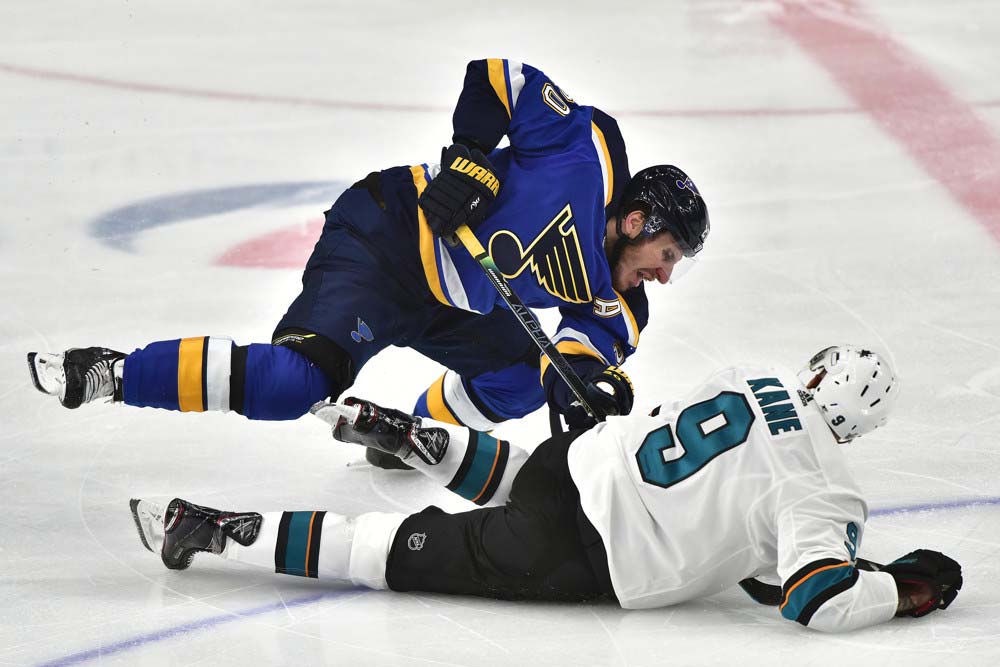 The St. Louis Blues managed to wear down the San Jose Sharks in their war of attrition known as the Western Conference Final and won it in six games. By the time they entered the deciding contest the Sharks were without injured former Norris Trophy-winner Erik Karlsson as well Tomas Hertl and captain Joe Pavelski, their top two regular-season scorers with 35 and 38 goals respectively.

The Blues have now ended the second-longest drought in the NHL by reaching the Stanley Cup Final for the first time since 1969/70 when they take on the Boston Bruins. The Toronto Maple Leafs haven’t played in a Final since 1966/67.

After outscoring the Blues 13-11 in the first three games of the series, the Sharks didn’t offer much resistance towards the end as they were outgunned 10-1 over the final two games and 12-2 over the last three. They won the opener 6-3 at home but left San Jose with a split after as the Blues doubled them 4-2 in the second contest. The Sharks edged the home team 5-4 in overtime in game three while the Blues bounced back with a 2-1 victory in game four. St. Louis then made it three wins in a row by pounding the Sharks 5-0 and 5-1 to take the series.

The Blues got off to a quick start in game six as David Perron opened the scoring after just 92 seconds. It was the fifth time in this year’s playoffs the Blues have managed to score within two minutes of the opening faceoff and they went 5-0 when pulling off the feat. The win meant they also avenged their six-game defeat at the hands of the Sharks in the 2015/16 Western Conference Final.

David Perron gets the @StLouisBlues on the board early in Game 6! 🚨#StanleyCup pic.twitter.com/nX8CKdhDty

San Jose entered game six with a 4-0 record when facing elimination this year but simply ran out of steam as the series wore on. Blues’ rookie goaltender Jordan Binnington improved with each outing and Vladimir Tarasenko came to life with three goals and five assists in the series. Tarasenko notched at least one point in each game to tie Gary Sabourin for the franchise record in a Conference Final. He’s also the third Blues’ player to register at least 30 playoff goals in his career. Brett Hull leads the way with 67 followed by Bernie Federko with 35.

In addition, captain Alex Pietrangelo recorded his 13th point of the postseason in game six to set a new club record for most points by a defenseman in a playoff season. Binnington was obviously another major reason the Blues advanced to the Final. The 25-year-old rookie is 12-7 in the postseason with a goals-against average of 2.38, a save percentage of 91.4 and a shutout.

The Blues made league history with the series win as they ended up going from worst to first in the West this season. In fact, they were sitting in last place in the entire 31-team league on January 2nd at 15-18-4 for 34 points. They are now the first team since the expansion era of 1967/68 to reach a Stanley Cup Final after residing in the NHL basement after 20 or more regular-season contests. Six other teams managed to make the playoffs after occupying last place after 20 games but they were all ousted in the very first round.

St. Louis finished the season at by going 30-10-5 since Jan. 2nd. They finished with 99 points to place third in the Central Division. The Nashville Predators topped the division with 100 points and the Winnipeg Jets placed second, also with 99 points.

Blues’ management was quite busy last summer as the team acquired several new players including forwards Ryan O’Reilly, Patrick Maroon, David Perron and Tyler Bozak. However, they started the season at 7-9-3 and on November 19th head coach Mike Yeo was fired and replace by Craig Berube. Their fortunes also turned around when Binnington was called up from the American Hockey League in January. He then went 24-5-1 with a 1.89 GAA, a 92.7 save percentage and five shutouts and is a finalist for the Calder trophy as the league’s top rookie. The team also put together a franchise-record 11-game winning streak from January to February.

They remained hot once the postseason faced off by ousting the Winnipeg Jets in half a dozen games in the opening round and then beat the Dallas Stars in double overtime of game seven in the second round. The Blues have clinched all three playoff series at home this season and have also been excellent on the road with a mark of 7-2.

The Blues will now be playing in their fourth Stanley Cup Final. They went all the way in the first three years of the franchise’s existence only to be swept in four straight games each time. The Montreal Canadiens eliminated them in 1968/69 and 69/70 with the Bruins doing it in 69/70.

As for the Sharks, they will return to the drawing board next season to try and end their own Stanley Cup drought. They reached the Final in 2015/16 only to lose to the Pittsburgh Penguins in six games. San Jose general manager Doug Wilson needs to decide how to handle their upcoming free agents as Erik Karlsson, Pavelski and 39-year-old veteran forward Joe Thornton will be unrestricted on July 1st and forwards Timo Meir and Kevin Labanc among others are restricted free agents.

Wilson will have a busy summer ahead of him as just five forwards are under contract for next season; Evander Kane, Logan Couture, Tomas Hertl, Melker Karlsson and Barclay Goodrow. It’s unclear at the moment if there will be a new-look Sharks’ squad in 2019/20 or if the core will remain to take one more shot at the Cup.