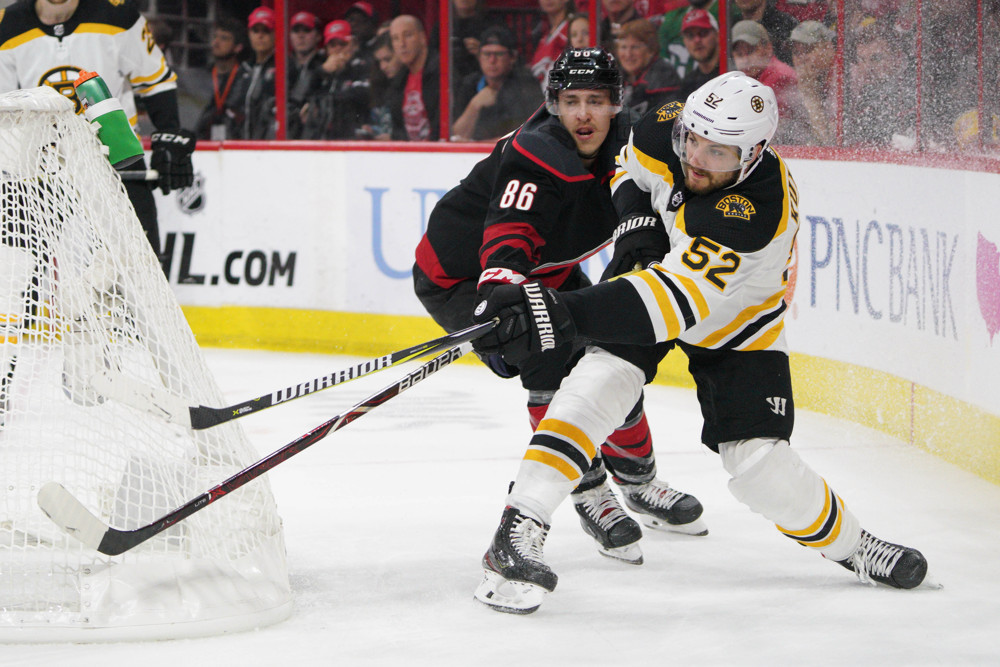 Under head coach Bruce Cassidy, the Boston Bruins have mastered the art of doing just enough to win. The margin of victory in the playoffs is razor-thin, but they believe that their opportunistic system, phenomenal special teams and battle-tested personnel will carry them through. More often than not, that faith is justified. In fact, it propelled them to the Stanley Cup Final last season.

When they’re truly dialed in, however, they can downright smother their opposition.

Even without David Pastrnak (unfit to play) and Tuukka Rask (opted out of the postseason), the Bruins dominated Game 3 of their first-round series against the Carolina Hurricanes on Saturday afternoon. Cassidy tweaked his lineup by replacing Nick Ritchie and Karson Kuhlman with Jack Studnicka and Par Lindholm up front, which represented a slight dip in offensive potency but also greater three-zone discipline. Boston was focused on controlling more of the game than it had in the previous two outings, and it delivered the goods in a cushy 3-1 win.

Granted, the Bruins took a period to find their bearings with new forward lines and uncertainty between the pipes. While they generated very little of note, they made sure that Carolina didn’t either, allowing Jaroslav Halak to ease his way into the contest.

After the opening frame, Boston imposed its will on the Hurricanes. It registered as many chances in the second period alone as Rod Brind’Amour’s troops did in the entire game (12). It ultimately owned 63.6% of the scoring opportunities and 71.4% of the high-danger bids against an opponent that was salivating at the thought of facing a club missing its most lethal forward and starting goaltender.

Cassidy’s team once again upped the ante in a hurry. 14 seconds into the second period, Charlie Coyle broke the ice by batting home a rebound on the power play:

When Boston turns it on, its straight-to-the-hole offense strikes before the defense can even settle in. In this case, Brad Marchand hops on a loose puck following an angled dump-in. Rather than setting up the team’s power play formation, the 32-year-old immediately tests Petr Mrazek to create a second chance that Carolina wasn’t ready to defend.

The Bruins had gained the mental edge, shifting from wounded animal to predator in search of the kill. A couple of minutes after Coyle opened the scoring, his line with Studnicka and Sean Kuraly flashed many of the traits that make Boston such a daunting foe. Heaviness along the boards, defensemen pinching to extend the team’s offensive zone pressure, great forward support and a constant emphasis on driving the play toward the opposition’s cage:

Fast-forward another two minutes, and Boston turns defense into offense. David Krejci makes up for his turnover a few seconds earlier by snuffing out Sami Vatanen’s pass along the wall and springing Ondrej Kase:

Mrazek was doing all he could to keep his team afloat, but a Hurricanes loss felt inevitable. The Bruins were finding scoring chances everywhere they looked, while Carolina simply couldn’t chain together more than one positive shift at a time. When you can buzz around the opposition’s net without weakening your defensive posture, you’re in great shape.

Boston’s penalty kill was somehow more threatening than the Hurricanes’ power play too. It enjoyed a number of odd-man rushes, including a Joakim Nordstrom breakaway and a 2-on-1 on which Kuraly tipped in the 2-0 goal barely one minute into the third period:

Though there’s no longer a shortage of skill in Carolina, it hasn’t quite developed the killer instinct that the Bruins possess. Sebastian Aho, Andrei Svechnikov, Teuvo Teravainen, Martin Necas, Vincent Trocheck and an active blue line were largely kept to the perimeter, moving the puck in a manner that resembled walking in circles. No matter how long they stuck with it, they couldn’t make any progress.

Halak was solid when called upon, but he certainly didn’t stand on his head. His defense afforded him clear sightlines on most of Carolina’s shots, which either originated far from the slot or were obstructed by Boston’s sticks. Over the course of 60 minutes, the Hurricanes mustered two high-danger chances at 5-on-5.

Even when they were logging zone time, they couldn’t match the quality of Boston’s sustained pressure. Just look at the contrast between these long offensive shifts:

On Boston’s attacking sequence, the forwards stay in perpetual motion to create space and both the left- (Matt Grzelcyk) and right-side defensemen (Connor Clifton) get in on the action to challenge Carolina’s resolve. There’s always a threat to consider. When it’s Carolina’s turn, the team…merely stands there for the most part. The Bruins build a wall in the heart of their defensive zone and the Canes are unsure how to penetrate it. It seems like the ice is tilted, but their best look is a bad-angle wrister by Jaccob Slavin.

That’s the key difference separating these two squads: The Bruins receive contributions across their lineup and in all game situations. If Patrice Bergeron and Marchand aren’t in sync, Krejci, Kase and Jake DeBrusk can chip in. On Saturday afternoon, it was Coyle’s line leading the charge. They’re obviously lethal on the power play. They just proved how hungry they are on the penalty kill. You’re never safe.

Boston’s depth and opportunism become that much scarier after Svechnikov—one of Carolina’s few productive forwards at the moment—suffered what appears to be a serious lower-body injury. Justin Williams (0 points), Jordan Staal (0 points) and Trocheck (1 point) have yet to find their groove, and they’re running out of time.

With the absence of Pastrnak and Rask, this was the Hurricanes’ chance to build on their Game 2 win and pin their opponent against the ropes. Instead, the laser-focused Bruins ruled the roost.