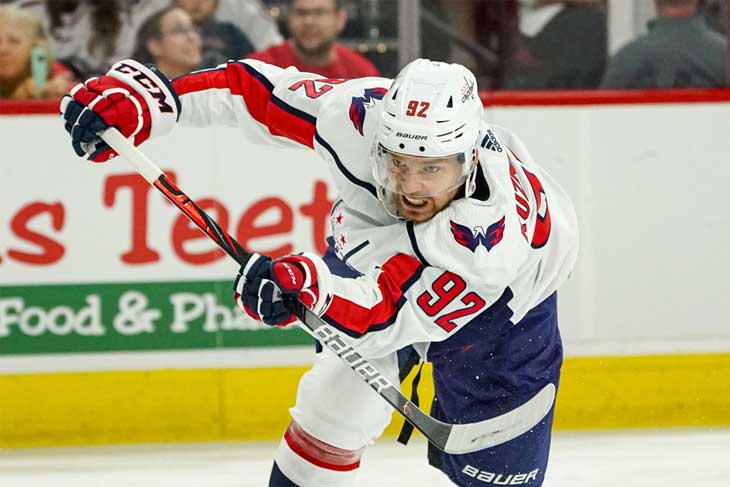 Champions may not want to admit it, but there’s luck involved in winning a Stanley Cup. Injuries, hot streaks and matchups all have a hand in determining whether a team survives the spring crucible. In 2017-18, the healthy and hungry Washington Capitals found their stride at the perfect moment and rode a phenomenal offense to their first title in franchise history.

Last season, Todd Reirden’s club displayed more or less the same dynamic that Barry Trotz’s Caps did. Though its effort wasn’t consistent, it boasted the talent level to run opponents right out of the rink. Whether they were motivated or not, Alex Ovechkin (89 points in 81 games), Nicklas Backstrom (74 points in 80 games), Evgeny Kuznetsov (72 points in 76 games), TJ Oshie (54 points in 69 games) and John Carlson (70 points in 80 games) formed a dangerous core that could hang with the NHL’s very best on any given night. That hadn’t changed. As such, it was no surprise that the Caps ranked fifth offensively (3.34 GPG). Conversely, it was no surprise that their still-underwhelming defense ranked 17th (3.02 GAPG).

In a nutshell, the Caps didn’t dictate much of the action. However, they possessed the weaponry to thrive all the same. Their 48-26-8 record (4th) was proof positive. On the strength of terrific offensive personnel, they posted the single highest on-ice shooting percentage in the NHL and outscored their problems to the tune of a 55.0 GF% (5th). They could afford to coast because they had proven themselves capable of finding the back of the net almost at will once they snapped out of their daze.

With one of the greatest finishers of all time — perhaps the single greatest if we account for league scoring averages — and two brilliant playmakers on the roster, it was easy to understand Washington’s self-confidence. Even after finally hoisting the Stanley Cup, Ovechkin’s scoring appetite remained voracious. The 34-year-old led the charge with his eighth 50-goal campaign and the highest shooting percentage of his career. The Caps owned just 41.3% of the high-danger chances during his shifts, but that doesn’t matter when your sniper can score from seemingly anywhere on the ice. An astounding 63% of his goals came from areas other than the slot. That’s quite frankly ridiculous and speaks to his uncanny knack for beating goaltenders on clean looks.

Of course, when he was granted quality opportunities, he could certainly bury those as well. And you could do a lot worse in terms of setup men than Backstrom and Kuznetsov. Though Ovechkin split his time between the pivots and remained potent regardless, their styles are very different. Backstrom is more patient and methodical, whereas Kuznetsov looks to push the action and force defenders into mistakes. Public enemy Tom Wilson (40 points in 63 games), versatile 32-year-old Oshie and speedy winger Jakub Vrana (47 points in 82 games) rounded out a great top six.

Once Carl Hagelin (11 points in 20 games) was acquired in late February, the third line took off as well. Lars Eller (36 points in 81 games) quickly rebounded from what had been a tough season, Brett Connolly (46 points in 81 games) soared to new heights and Hagelin provided dizzying pace and two-way responsibility. As a trio, they posted a remarkable 63.5 CF%, 67.0 SCF%, 62.2 HDCF% and 75.0 GF%.

The outlook wasn’t as rosy on the back end, though. If anyone on the team was suffering from a Stanley Cup hangover, it was Matt Niskanen. The typically steady blueliner displayed horrid gap control and net-front coverage, conceding opponents far too much space to work with. Since he was the safety net for partner Dmitry Orlov — a riverboat gambler by nature — their pairing was an utter disaster for most of the season. They owned just 38.8% of the high-danger chances and 43.8% of the goals scored during their shifts. That was a massive slide from their 46.7 HDCF% and 54.4 GF% in 2017-18. Unfortunately, that pair logged the second- and third-most minutes on the squad and failed miserably when facing tough matchups.

While Carlson and Michal Kempny remained a solid duo (52.2 CF%, 50.3 SCF%, 44.2 HDCF%, 59.8 GF%), that alone wasn’t enough to save the defense. Picking up Nick Jensen from the Detroit Red Wings was a minor upgrade, whereas Brooks Orpik was aging by the minute and 22-year-old Jonas Siegenthaler was largely unproven.

Moreover, Braden Holtby (2.82 GAA, 91.1 SV%) hasn’t inspired confidence between the pipes over the past couple of years. The rock-solid starter capable of stealing games on his own has been replaced with an inconsistent, borderline average goaltender. Among the 29 netminders who made at least 40 starts a season ago, Holtby ranked 17th in GAA and 18th in SV%. Backup Phoenix Copley (2.90 GAA, 90.5 SV%) didn’t fare any better. The team finished 13th in on-ice SV%, 21st in SV% on scoring chances and 14th in SV% on high-danger bids. Goaltending was not an area of strength.

Adding salt to the wound, Kempny’s hamstring injury in late March would sideline him for the rest of the year. This forced another defenseman into big minutes and thinned an already unreliable blue line.

That was bad news heading into a first-round date with the Carolina Hurricanes, a major underdog that had quietly played some of the best hockey in the NHL during the regular season. Rod Brind’Amour’s club pressured the puck with relentless fervor in all three zones, resulting in a 54.8 CF% (2nd), 54.2 SCF% (3rd), 54.7 HDCF% (4th) and 55.4 xGF% (1st). If the Canes could ever bridge the gap between their expected goals and their actual goals, opponents were in for a world of hurt.

Washington snuck out two early victories, but a blowout Hurricanes win in Game 3 and Oshie’s fractured clavicle in Game 4 turned the tide of the series. Carolina threw the kitchen sink at the Caps, who were now missing two of their steadiest players. Reirden’s troops controlled virtually none of the action (40.6 CF%, 43.8 SCF%, 43.1 HDCF%, 41.9 xGF%) and ultimately buckled under Carolina’s non-stop blitz. Though they hung in there and pushed the series to double overtime in Game 7, a drop-off in their OISH% (10.1 to 8.8) sealed their fate. That has always been the danger in riding percentages. One hiccup could end your campaign. In this case, one goal was the difference.

Oshie goes down hard at the boards, skates straight to tunnel. #CapsCanes pic.twitter.com/jkkHQGzZuL

Beyond injuries and a slightly less potent offense, Washington didn’t show the same level of hunger and urgency under Reirden as it did under Trotz. After all, there’s a reason repeating is such an impressive feat: You have to fend off title contenders as well as your own self-satisfaction.

Any post-title glow had clearly worn off for general manager Brian MacLellan. He didn’t make blockbuster moves in the offseason, but he retooled his roster. Niskanen was traded to Philadelphia for rugged stay-at-home defenseman Radko Gudas. Washington also signed Richard Panik, Garnet Hathaway and Brendan Leipsic for depth purposes up front, whereas Orpik retired and Connolly joined the Panthers in free agency.

MacLellan did well to extend Vrana too, signing the 23-year-old to a two-year deal that ensures his pace and scoring instincts will be present for the duration of the Caps’ current championship window.

Gudas may not be fit to take on top-tier competition, but the 29-year-old should bring a sturdier presence in the trenches. He’s made a living by keeping the slot clean for his goaltenders and his nastiness could prove infectious. Panik is a smart and responsible winger and Hathaway’s motor never stops. Though MacLellan hasn’t radically altered his lineup, he seemingly wants his Caps to be more physically engaged and was willing to sacrifice some talent to that end. You can’t blame him either because they excel under those conditions. A bit more possession wouldn’t hurt, but they don’t need to own the puck the way Carolina, Vegas or San Jose do. When they lean on opponents, they create space for their talent to shine. Momentum shifts, rushes and passing lanes materialize, penalties are drawn.

As such, there is no big-name newcomer poised to reinvigorate the troops. It’s on the Caps’ familiar faces to summon the intensity and drive that finally led them to the promised land in 2017-18. You can’t control injuries and matchups, but you can control how hard you work. Washington has learned what it takes to reach the summit, so it’s faced with a simple yet significant choice: Rest on your laurels or run through that brutal gauntlet once more.