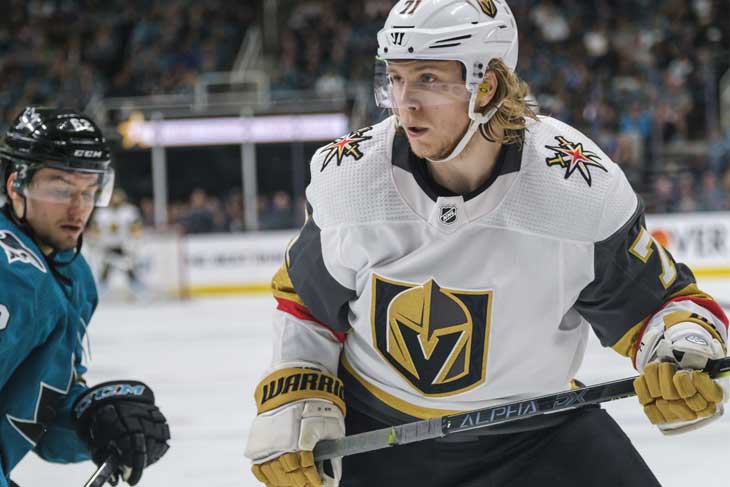 The Vegas Golden Knights defied conventional wisdom in their first NHL season. Rather than floundering at the bottom of the barrel as an expansion franchise, Gerard Gallant’s men entered the league with a fully realized identity. They outworked every team they encountered and played with a level of cohesion that usually takes years to develop. Those qualities propelled them all the way to the Stanley Cup Final, where they fell to the Washington Capitals in five games.

A squad of cast-offs had seemingly skipped a few steps to enjoy a stunning inaugural campaign. Where were the growing pains?

Well, those surfaced a year later. The team bolstered its attack by trading for Montreal Canadiens sniper Max Pacioretty and signing veteran center Paul Stastny in free agency. Replacing James Neal (signed with Calgary) and David Perron (signed with St. Louis) with those two was an upgrade in pure offense, but it also seemed to muddy the waters.

Overnight, the Golden Knights had shifted from terrorizing opponents with their work ethic and three-zone pressure to…trying to find themselves. This was no longer a club built on pure hustle, but it wasn’t quite a finesse-based outfit either. Without the sense of togetherness that defined them early on, the Golden Knights fell perpetually short of the previous year’s performance. They still controlled 54.4% of the shot attempts (3rd), 54.9% of the scoring chances (1st) and 55.8% of the high-danger opportunities (1st) for a 54.7% expected goal share (3rd) at 5-on-5. Their defense generally held strong too after Nate Schmidt’s return from suspension. However, their finishing touch took a hit, forcing their output to dip from 3.27 (5th) to 3.00 (13th) goals per game. Though that may not seem like the end of the world, it greatly reduced their margin of victory on a nightly basis. It’s no surprise, then, that they tumbled from 109 points to 93 in 2018-19.

Though Pacioretty’s (40 points in 66 games) arrival and Alex Tuch’s (52 points in 74 games) emergence as a budding star altered the squad’s DNA, the top line of William Karlsson (56 points in 82 games), Jonathan Marchessault (59 points in 82 games) and Reilly Smith (53 points in 74 games) may have suffered the most. The trio is certainly skilled, but it doesn’t boast the sort of game-changing talent that most top units do. It thrived on pace and near-telepathic chemistry. That wasn’t quite there last season. Since hockey is indeed a game of inches, Karlsson, Marchessault and Smith were repeatedly frustrated at the point of attack. They would govern the lion’s share of their shifts (54.1 CF%, 54.8 SCF%, 53.3 HDCF%, 55.3 xGF%) only to stumble when it mattered most. 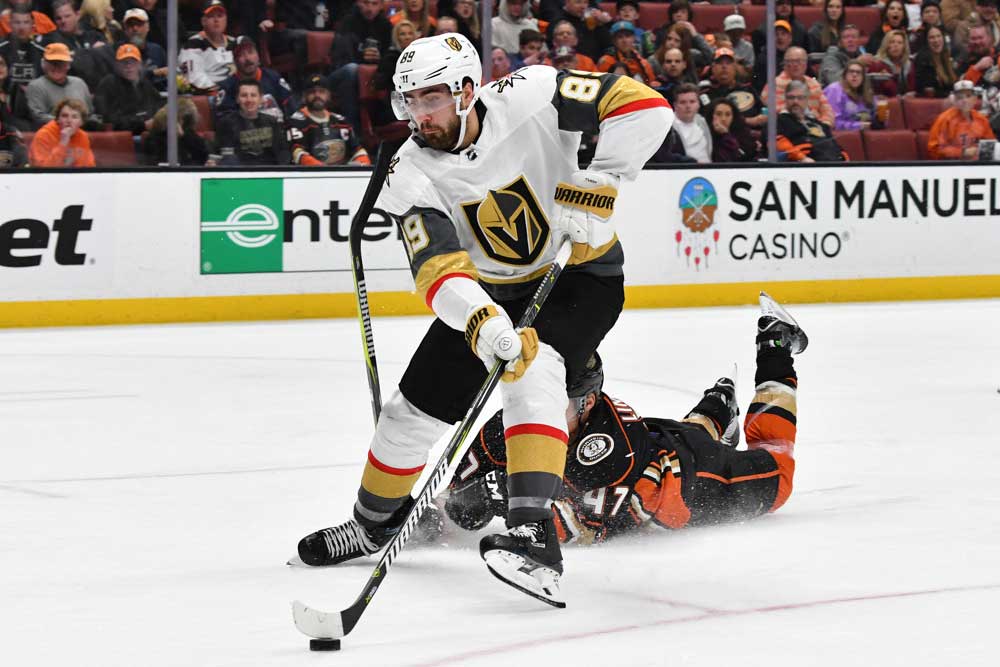 Karlsson dealt with a 22-point dip, Marchessault’s total shrunk by 16 and Smith produced seven fewer points in seven more games. On the whole, their GF60 nosedived from 3.98 to 2.85. Naturally, that took a huge bite out of the team’s offense.

It wasn’t all bad, though. Tuch stepped up while many trended down, as he had registered 40 points in 44 games by the end of January. A bit less structure benefited the 23-year-old. He thrives in space, where he can take full advantage of his deceptive speed and long reach to gain an edge on defenders. By the time they realize he’s gathered a head of steam, he’s long gone. Unfortunately, his boost in confidence hit a brick wall in February, when he mustered just three points in 13 games.

With a slumping top six and a heated playoff race on its hands, Vegas was searching for answers. As it happened, the Ottawa Senators were selling them. Instead of opting for a stopgap, the Golden Knights acquired Mark Stone (73 points in 77 games) in exchange for promising defensive prospect Erik Brannstrom (2017 15th overall pick), depth forward Oscar Lindberg and a second-round pick. Stone, arguably the best two-way winger in the world, offered Vegas the luxury of creating matchup nightmares while pushing Tuch down to the third unit in order to spread the wealth. He also brought a much-needed dimension to the second line. Stastny (42 points in 50 games) and Pacioretty were dangerous with the puck but often not persistent enough without it. No one can ever accuse Stone of that, as the 27-year-old is downright relentless on the forecheck. Even though the production wasn’t there early (11 points in 18 games), he put up remarkable underlying numbers (55.7 CF%, 55.3 SCF%, 59.6 HDCF%, 59.6 xGF%) that indicated just how thoroughly Vegas dominated during his shifts.

Closing out the year on an 11-6-2 run, the new-look Golden Knights managed to right the ship and held high hopes for another long postseason. There were concerns, however. You never really know what to expect from Marc-Andre Fleury (2.51 GAA, 91.3 SV%), a wildly inconsistent netminder who proved so vital to the club’s performance a year ago. He’s just as likely to steal a game as he is to squander one. Special teams appeared to represent a key weakness as well: While Vegas was superb at even strength, it ranked 25th on the man advantage and 14th on the penalty kill.

Its first-round opponent would expose that very weakness. Following six hotly contested outings against the San Jose Sharks, the teams squared off for Game 7 at the SAP Center. A historically bad call in the third frame and the Sharks’ opportunistic power play combined for four unanswered goals in one fell swoop. It was one of the most shocking developments in playoff history. Marchessault tied the game late, but Barclay Goodrow buried an exhausted Vegas squad in overtime. To lose a series after owning 60.9% of the goals at 5-on-5 is rough to say the least. Stone was a monster, Pacioretty did his job, Karlsson, Marchessault and Smith bounced back, but Vegas simply wasn’t ready for San Jose’s blitz. The laser focus that carried the team in 2017-18 sputtered at the 11th hour.

Looking toward next season, the Golden Knights are continuing to evolve. Pierre-Edouard Bellemare (Colorado) and Ryan Carpenter (Chicago) — foot soldiers who reflected the club’s DNA — moved on in free agency. Colin Miller (Buffalo) and Erik Haula (Carolina) were dealt away too, leaving a number of roster spots available.

2017 sixth overall pick Cody Glass stands at the front of the line in that respect. The 20-year-old is a gifted playmaker with a nice build and terrific instincts. After an abbreviated year in the WHL, he joined Vegas’ AHL affiliate and produced very well in both the regular season (5 points in 6 games) and playoffs (15 points in 22 games). That was as promising an audition as the organization could have hoped for and he’ll be granted every chance to show he belongs in the pros this fall. Assuming he can show more than the occasional flash of brilliance, Gallant will suddenly enjoy more flexibility up front. Glass could start out on the wing or enjoy sheltered minutes down the middle. Either way, he’s poised to kick off his NHL career.

On the blue line, Nicolas Hague (2017 34th overall pick) and Jimmy Schuldt (college free agent) will duke it out for an opportunity with the big club. They’re both promising rearguards who could offer Vegas an upgrade in terms of mobility and puck-moving ability. Hague enjoyed a solid first year in the AHL, whereas Schuldt tore up the NCAA before making his Golden Knights debut to end the season. He’s surely hungry for more appearances.

Among the established roster players, Karlsson, Marchessault and Smith will look to rebound from a rough season. In their two years as a full-time unit, their PDO has ranged between 104.2 and 98.6…and no one knows where they’ll land moving forward. Are they a stellar play-driving trio or a stellar play-driving trio that also delivers first-line production? Tuch is another major question mark. The 6’4”, 222-pounder bottomed out down the stretch, as he transitioned from the team’s brightest spot to a complete afterthought in the spring. He no longer seemed comfortable with his role once Stone arrived and the coaching staff will need to figure out how to maximize his impact.

Full seasons for Stone and Schmidt, a top line eager to forget a down year and a highly touted forward prospect waiting for his shot to prove he can hang: The ingredients for success are there. It isn’t clear whether they’ll coalesce, though.

Since making its NHL debut, Vegas has enjoyed a significant influx of skill. There’s no arguing that its roster is stronger on paper now, but has that come at the expense of its identity? Who are the Golden Knights now? Can they win primarily on the strength of their talent? It’s too soon to tell, but maybe they just aren’t as daunting without that massive chip on their shoulder.