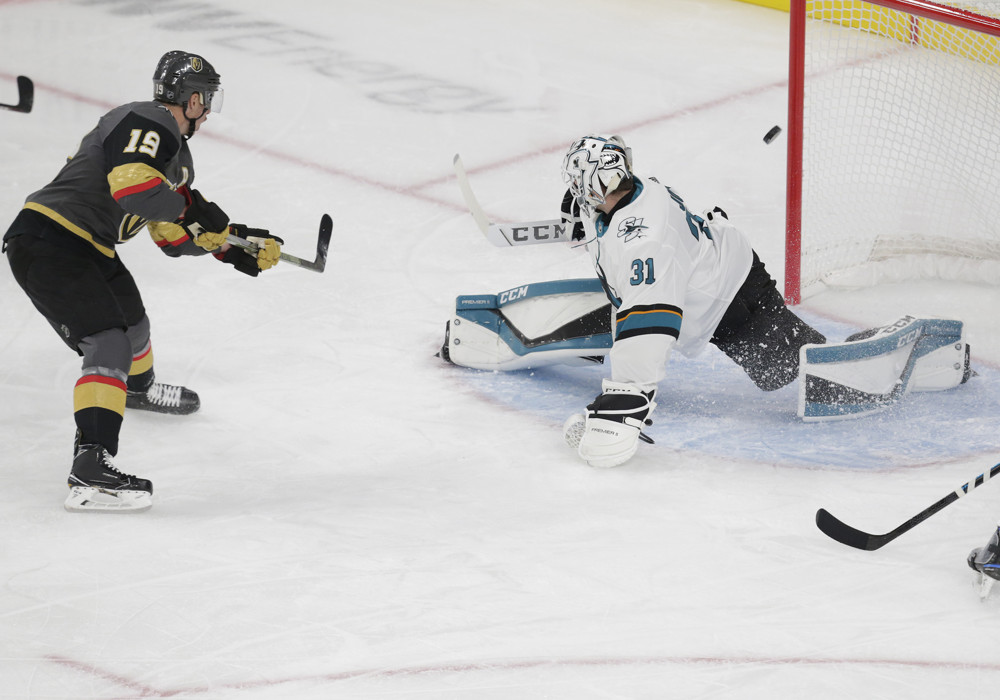 Three games does not an NHL season make. However, going 0-3 while being outscored 12-3 is a good way to get behind the eight-ball right from the get-go. To make matters worse, the San Jose Sharks have lost all three of their games to Pacific Division foes in what have basically been four-point games. The toothless Sharks have been downed 4-1 and 5-1 by the Vegas Golden Knights and 3-1 by the Anaheim Ducks to start the 2019/20 campaign and the immediate road ahead looks pretty rocky.

The last time the Sharks sank to an 0-3 start was back in 1993/94 and they’ve never been outscored 12-3 after three games. It’s too early to panic but the wheels will likely be set in motion regarding an exit plan pretty soon if the slump extends much further. The team has been plagued by slow starts as they allowed a goal against in the first six minutes of each contest and haven’t been able to score or keep the puck out of their own net.

Head coach Peter DeBoer has to be slightly concerned with his goaltending duo of Martin Jones and Aaron Dell with their combined 87.6 save percentage as well as the lack of production from some of his top guns. Timo Meier, Kevin Labanc, Tomas Hertl, and Marc-Edouard Vlasic are all without a point after three games and Erik Karlsson missed the season opener due to his daughter’s birth. Relief could be on the way however as power-forward Evander Kane has just served the third and final game of his suspension for abusing an official in preseason action.

Understandably, the Sharks’ goaltending has come under fire from some fans as it seems to be an ongoing problem. Jones struggled much of 2018/19 and went through his worst season since breaking into the league with a 2.94 goals-against average and an 89.6 save percentage. The 29-year-old was inconsistent in the playoffs too with a 3.02 GAA and 89.8 save percentage. Even so, he took his squad all the way to the Western Conference Final where they were ousted in six games by eventual Stanley cup champions the St. Louis Blues. Meanwhile, the 30-year-old Dell had a 3.17 GAA and 88.6 save percentage in the regular season.

No ones said it so Im gonna: that is horrendous goaltending from Martin Jones https://t.co/T40KUQsrXY

General manager Doug Wilson kept his goaltending intact during the summer and now it’s up to Jones and Dell to prove he did the right thing by standing by them. If they don’t do it soon one or both of them could find his days in San Jose numbered. Wilson’s hands may be tied somewhat though since he doesn’t have much wiggle room when it comes to the salary cap.

Combined, Jones and Dell are worth $7.65 million in cap money this season but the team hasn’t been getting its money’s worth from them. Jones is raking in $5.75 million and in just the second year of a six-season deal while Dell’s taking home $1.9 million.

But even if Wilson felt it was time to make a goaltending change he’d certainly find it to be a monumental task. Who’d be looking for somebody with Jones and Dell’s salaries and their statistics? Furthermore, who would a replacement netminder be? There were a few free agent goalies available in the free agency market this offseason including veterans Curtis McElhinney and Cam Talbot but Wilson was happy to stick with Dell as his backup.

Goaltending isn’t the only aspect of the game plaguing the Sharks early on anyway. The offense is as dry as a dust storm and the power-play is actually minus-three as it’s been held off the scoresheet while allowing three shorthanded goals against. These things usually work themselves out eventually, but at the moment the team is facing problems in all areas of the ice. One of the major setbacks though is the lack of scoring as the Sharks managed to register 101 points last year despite posting the worst save percentage in the league at 88.9 per cent.

They simply outscored their goaltending problems last season but haven’t been able to get out of the starting blocks this time around. As long as Jones and Dell struggle this is a team that will need to score three or four goals most nights to have a shot at winning. One goal per game isn’t going to cut it so as long as their scoring woes continue this losing streak could easily grow quite rapidly.

The Sharks are also getting used to life without last year’s top goalscorer and former captain Joe Pavelski. He took his 38 goals and 64 points goals from last season and signed with the Dallas Stars for three years at $21 million as an unrestricted free agent during the summer. The Sharks miss the 35-year-old’s offense as well as his leadership and will need other players to step up and help fill the void.

Patrick Marleau has agreed to a contract to return to San Jose. https://t.co/78yagMay1u pic.twitter.com/H4tl33zvE9

If San Jose’s scoring and goaltending troubles continue it should be easier to address the offense first.  Goaltenders just don’t get traded that often and it’s unlikely anybody of note would be available until close to the trade deadline anyway. There could be some teams trying to shed contracts later in the season so a quick fix doesn’t look possible at the moment.

Jones and Dell are the only Sharks’ goalies with NHL experience with the others in the system being  Josef Korenar, Andrew Shortridge, Zachary Emond and Mike Robinson. But unless Korenar or Shortridge catch fire down in the minors Jones and Dell are just going to have to ride out the storm.

The Sharks have far too talented of a team to dig themselves a huge hole at the start of the season with a long losing skid. But with the NHL having so much parity these days there’s no such thing as an easy game. They’ll simply have to sort things out among themselves and turn things around as soon as possible through hard work.