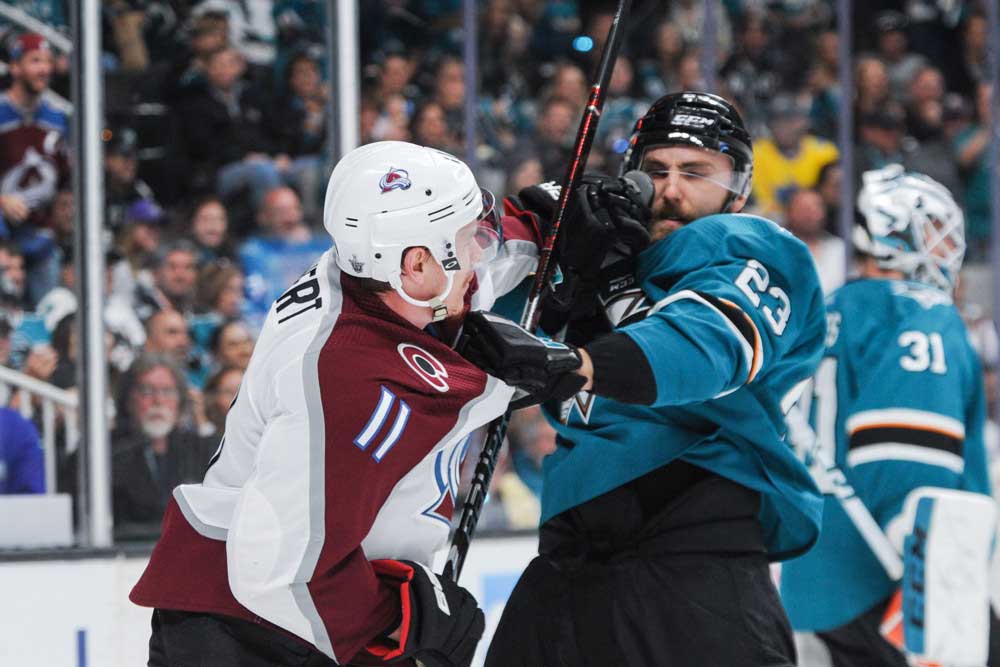 The San Jose Sharks gave up home-ice advantage to the Vegas Golden Knights in the first round of the playoffs by dropping game two at home. They’ve now repeated themselves after being edged 4-3 by the Colorado Avalanche in the second game of their current series after winning game one 4-2. They are now 4-2 at home in the postseason after losing for the first time when leading after 20 minutes.

The Sharks thankfully gained home ice back against Vegas after falling behind three games to one and reeled off three straight victories to take the series in overtime of game seven. But in the end, they were fortunate the deciding contest came back at the Shark Tank. San Jose will now try to regain that advantage by at least splitting the next two outings in Colorado. However, it won’t be easy.

There was some good news for the Sharks though as Norris Trophy-finalist Brent Burns continues to be a one-man wrecking crew against the Avalanche. The bearded blue liner led the way in game one with a goal and three assists and then followed up with two goals and an assist in the second encounter. He now leads his team in playoff scoring with 11 points. In addition, forward Michael Haley returned to the lineup after being sidelined for five contests with a leg problem and led the team with five hits despite getting just 4:47 of ice time.

Burns wasn’t the only rearguard to star in the second game though as Colorado’s Tyson Barrie caught fire with a goal and pair of helpers. It definitely came in handy as the Avalanche won in San Jose for just the third time in their past two dozen visits and are now a dismal 3-15-6 over that span.

Gabriel Landeskog and Nathan MacKinnon continued to contribute for the Avalanche as each had a goal and assist in the win. MacKinnon and Mikko Rantanen are both in the midst of six-game point scoring streaks as MacKinnon has four goals and seven assists with Rantanen chipping in with five goals and six assists. The Sharks also have a couple of players on streaks as Burns has three goals and six assists in the last four outings and Tomas Hertl has posted four goals and three helpers in the last five games.

Another bright spot for San Jose has been the play of 23-year-old forward Kevin Labanc of Staten Island, New York. The youngster has registered three goals and three assists in nine playoff games this year and is a plus-1. He’s playing on the third line and skating an average of 15:45 per night. He was one of the heroes of San Jose’s famous seventh-game comeback against Vegas when they won 5-4 in overtime after trailing 3-0 with just over 10 minutes to play.

Labanc scored a goal and added three assists in a span of four minutes and one second when the Sharks took full advantage of a five-minute power-play. The four points set a new NHL record for points in a period in a seventh and deciding game. Labanc has been playing on the right side of center Joe Thornton and left-winger Marcus Sorensen and is having a big impact on the ice.

He displays an effective non-stop work ethic and also possesses a fantastic shot. He’s improved greatly as the season has worn on as head coach Pete DeBoer cut his ice time earlier in the year when he was having problems with the defensive side of his game. The 5-foot-11-inch, 185 lb Labanc had a productive season with 17 goals, 39 assists and 56 points in 82 games while playing 14:01 per game. He chipped in with a couple of power-play markers and also netted four game-winning goals.

Labanc has 36 goals, 80 assists and 116 points in 214 career regular-season games after being drafted in the sixth round with the 171st overall pick back in 2014. He played with the American National Team Development Program while growing up and also skated with the Barrie Colts of the Ontario Hockey League. Labanc scored 81 goals and 188 assists for 269 points in 198 games in the OHL and notched 23 points in 21 games with the San Jose Barracuda of the American Hockey League before cracking the Sharks lineup in 2016/17.

Labanc and the rest of the Sharks will need to be at their best to ultimately prevail against the Avalanche as Colorado is proving to be no pushovers in the postseason. They have a high-octane offense and Philip Grubauer has been stellar in net with a save percentage of 92.4. Head coach Jared Bednar started game with the separation of his top line of Landeskog, MacKinnon and Rantanen as he replaced Rantanen with Alexander Kerfoot.

Rantanen started with Carl Soderberg and Colin Wilson, but Bednar reunited his top trio in the second period and they responded by combining for five points. It’s unclear if they line will remain together, but at the moment it would seem unwise to split them up again.

In addition, the Avalanche’s chances of victory will be greatly improved if Tyson Barrie and continue to contribute from the blue line. Barrie has a goal and seven assists in seven playoff games and is a plus two. Matt Nieto and Wilson have also been pulling their weight with three goals and two assists each. Defenseman Samuel Girard has played just four games but has looked impressive even though he’s yet to score a point.

However, the Avalanche do need several players to pick up the pace and start chipping in offensively such as Soderberg, Tyson Jost, Gabriel Bourque and Kerfoot. Those four players have posted just one goal and three assists between them in a combined 28 games.

Regardless of who emerges victorious, this series could very well be the most exciting of the second round. Both squads feature plenty of speed, skill and offense with the ability to fight back from deficits. It could very well go the distance and if it does it means the fans will be the ultimate winners.