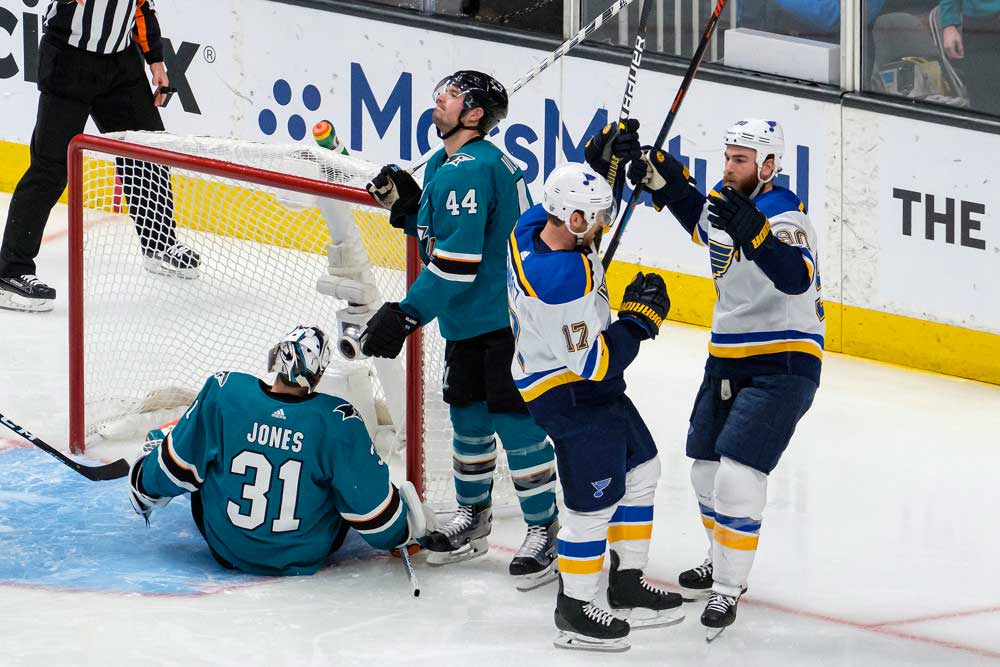 The San Jose Sharks are hurting — and not just on the injury front. Following a non-call on a blatant hand pass that gifted them Game 3 of the Western Conference Final, they’ve scored a total of one goal in two games. Meanwhile, the St. Louis Blues exploded for five on Sunday afternoon to take a 3-2 series lead and appear poised to secure their first Stanley Cup Final berth since 1970.

With their season on the line, the Sharks certainly need to shape up in a hurry.

Whether it was an unforced turnover, blown coverage or miscommunication, the Sharks committed a stream of mistakes in Game 5. It was indeed a wild and sloppy affair. However, the key for San Jose moving forward might actually be…to get wilder and sloppier.

The Sharks aren’t built to play a disciplined style. In fact, attempting to smother their natural aggressiveness has backfired in a major way over the past two contests, spreading a sense of hesitancy throughout the roster. Their instincts would tell them to push the envelope, whereas their conscience would preach caution. That tendency to second-guess every decision placed San Jose in the worst possible position: They were neither active enough to impose their thrilling brand of hockey nor passive enough to truly enforce a tighter system.

Stuck halfway between those poles, head coach Peter DeBoer’s troops were continually late to the party on Sunday. The Blues were granted far more space than they ever earned, and as a result, they ran up the score on Martin Jones. San Jose opened the floodgates for a St. Louis team that grew more effective the closer it got to Jones: It controlled 54.3% of the shot attempts, 59.1% of the shots, 60.5% of the scoring chances and 70.6% of the high-danger bids at 5-on-5. Even with the Sharks’ more conservative approach, there was no pushback in the trenches at all. When you own less than 30% of the quality opportunities, you can’t be surprised by a 5-0 trouncing.

Over the past five games, San Jose has controlled 52.2% of the shot attempts but just 45.9% of the shots on target at even strength. St. Louis has clearly made a concerted effort to clog the lanes. The Sharks boast enough talent to overcome this tactic, though. In addition to gun-slinging defensemen Brent Burns and Erik Karlsson, they have Tomas Hertl, Logan Couture, Joe Pavelski, Timo Meier, Evander Kane, Joe Thornton and Gustav Nyquist at their disposal. There’s no shortage of firepower here. These players don’t need an endless supply of looks. They require the right looks. San Jose’s conversion rate (22.7%) on high-danger chances is higher than St. Louis’ (17.1%), but it’s not getting enough of them. Controlling 43.2% of those opportunities isn’t going to cut it — especially since the Blues (15.8%) are keeping pace with the Sharks (16.7%) on the man advantage.

Where has the Sharks’ bite gone? Where is their skill at the point of attack? Why aren’t they taking the fight to St. Louis’ front door?

Operating on the perimeter works in the Blues’ favor. They’ve formed a blockade in the high slot and are tying up sticks to nullify the threat of slap passes, leaving Burns and Karlsson to fling pucks at Jordan Binnington from a distance. Granted, a shot or two may filter through the traffic and find the back of the net, but that’s a toss-up. The Sharks are on the verge of elimination and need a sure thing. They need to climb out of their predictable rut and embrace their creative tendencies.

Unfortunately, health is a very real concern at the moment. Karlsson and Pavelski are visibly hurting. Hertl left Game 5 after taking a questionable hit to the head from Ivan Barbashev. Those are three vital cogs on the offensive side, but there’s no room for excuses in the playoffs. San Jose must make do with the hand it’s been dealt.

Hertl gets hit high by Barbashev. No Call from the officals.#SJSharks #STLBlues #StanleyCup pic.twitter.com/tIZRQegFhA

That starts with Burns. Perhaps more than anyone on the roster, he thrives in absolute chaos. His brute strength, deadly shot, deceptive wheels and willingness to jump into the fray had him looking like a world-beater through the first two rounds (14 points in 14 games), but he seems tentative right now. He has just two points in the series and seldom grabs the bull by the horns to impact the outcome of a game. His assertiveness might be the thing of coaching nightmares, but the positives usually outweigh the negatives. His mad dashes catch opponents off guard and offer the Sharks a numbers advantage in the scoring areas.

A restrained Burns, on the other hand, is…just another guy out there.

The 34-year-old is too important to the team to be kept on a short leash. His absence deeper in the offensive zone also hurts the forwards, who no longer enjoy the room that his bedlam generates. They’re forced to work harder for possession, for shots, for chances. Clearly, that isn’t panning out.

Outside of Logan Couture (6 points in 5 games) and Timo Meier (5 points in 5 games), the Sharks have been rather quiet up front. Hertl and Kane have posted just one point apiece and look downright lost against the Blues. The former is great at gaining control down low, but he needs movement from his teammates in order to carve a path to the net. Too often, the club’s attack finds one player toiling away while everyone else watches the action. Meanwhile, the latter can’t find his comfort zone in Round 3. Though many think of him as a power forward, his offensive game is closer to Max Pacioretty’s. Kane is a speedy and streaky sniper who won’t tip the scale if he isn’t fed chances. This guarded version of the Sharks provides him with precisely the wrong conditions to produce in.

San Jose can’t afford to hold anything back. Trying to play a calm and structured game is bound to fail the Sharks because it isn’t in their DNA. Just look at them puck-watching on Jaden Schwartz’s third goal of the afternoon:

HATTY FOR SCHWARTZY!!!! HIS SECOND OF THE PLAYOFFS!!! #stlblues pic.twitter.com/vCSFfaSfCd

It isn’t a Sharks game without a slew of chances, but since a more careful version of San Jose is a more porous version of nearly any other squad, it’s tendered St. Louis the lion’s share of opportunities in the past couple of contests. Slamming on the brakes now when they’ve been a whirling dervish all season only serves to disorient the team.

It knows how to play at one speed.

The Sharks need to embrace their erratic nature, forcing the issue and thus forcing the Blues into less comfortable situations. Activate the defense, pinch when defenders least expect it, support each other on the cycle. Overwhelm the opposition with sheer numbers. Without that unconventional approach, St. Louis can merely sit in its conventional defense and wait for San Jose to collapse. After all, the edge in fundamentals belongs to Craig Berube’s group.

It’s time for the Sharks to throw out the textbook and rediscover what brought them to the conference finals to begin with: complete mayhem. Anything short of that will likely spell the end of their year.