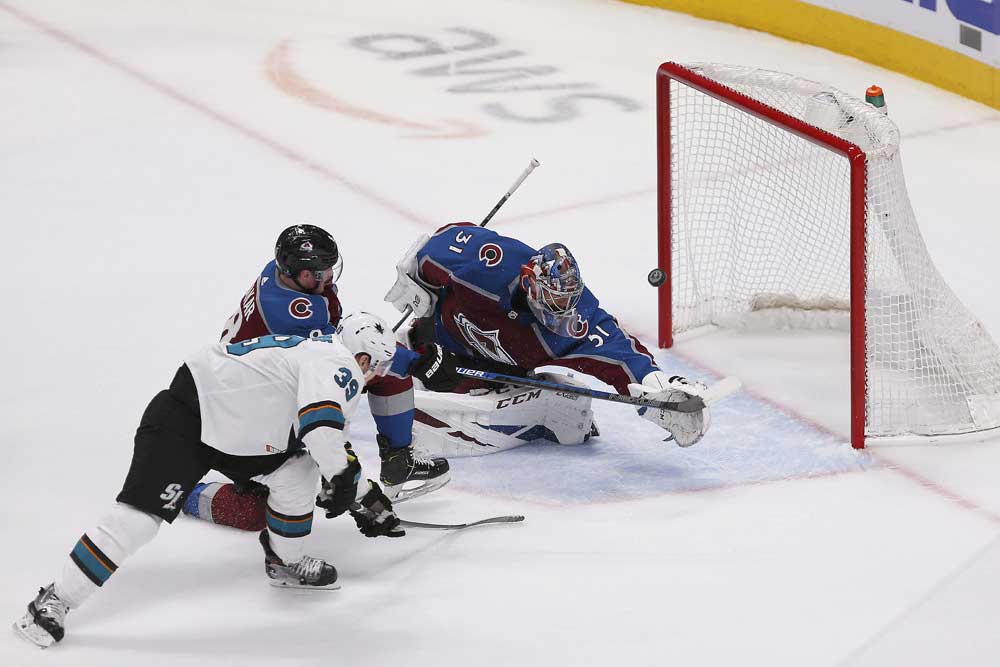 Over the past two seasons, Colorado Avalanche center Nathan MacKinnon has established himself as one of the very finest and most electrifying players in the world. His spectacular outings in the postseason are only cementing that status, as he’s tied for the lead in scoring this year (12 points in 8 games) and now has 28 points in 21 career playoff games.

A beauty from Nathan MacKinnon to cut the Sharks lead in half. 🚨

In fairness to the San Jose Sharks, they’ve drawn up the ideal game plan to slow Colorado down in the neutral zone. Rather than playing tight coverage and allowing the Avalanche’s speed to make a difference, they’re sagging off and waiting for Jared Bednar’s club to attempt a stretch pass before closing down its space. For the most part, this strategy has served them well in the second round. However, MacKinnon’s relentless drive has at times bulldozed through San Jose’s great wall regardless. There’s simply no denying his explosiveness and ability to create something out of nothing.

At the end of the day, though, a one-man wrecking crew consists of just one man.

That reality is growing more evident as this series progresses. San Jose can find offense throughout its lineup and has seen a number of players step up in critical moments. As brilliant as MacKinnon is, he alone can’t compete with a seasoned and balanced Sharks roster. On Tuesday night, it was Logan Couture’s (12 points in 10 games) turn to catch fire and propel San Jose to victory. The dependable pivot notched a hat trick in Game 3 by combining a persistent forecheck with clinical finish. He simply out-willed the Avalanche throughout the night, tracking the puck well and stopping at nothing to retrieve it.

The 30-year-old is a proven playoff performer too. He led the 2015-16 field in scoring with 30 points in 24 games and seems to relish every last detail of life on the biggest stage — the intensity, the sacrifice, the never-ending battles. Contending with Couture is a challenge for Colorado…but he’s merely one piece of the puzzle in San Jose.

Tomas Hertl (10 points in 10 games) is unquestionably the most valuable Sharks forward this season. With his solid frame (6’2”, 215 lbs) and poise under pressure, he controls play at both ends of the ice. He’s particularly effective down low, where he uses his reach, timing and leverage to carve out space in typically congested areas. We saw that all year long and he’s carried his sterling play into the postseason. Timo Meier (8 points in 10 games) has also flourished in 2018-19, adding a deadly release to his blend of speed and grit. No matter where head coach Peter DeBoer slots him in the lineup, he makes life difficult for the opposition.

Then there’s 39-year-old Joe Thornton (6 points in 9 games). Finally healthy, the veteran playmaker is elevating the play of up-and-coming winger Kevin Labanc (6 points in 10 games). The shifty but inconsistent forward has benefited from Thornton’s ability to slow the game down and regularly give his teammates touches in advantageous positions. In Game 7 against the Vegas Golden Knights and Game 1 against the Avs, the kid looked like a star in the making. He may never fulfill that potential, but he’s certainly offering San Jose an extra dose of potency in the bottom six.

Oh, and then there’s Erik Karlsson (10 points in 10 games) and Brent Burns (11 points in 10 games). You know, two of the decade’s best offensive defensemen. The former’s vision is world-class, whereas the latter has no conscience whatsoever, jumping up into the attack to generate chaos when opponents least expect it. They’re both willing shooters and exceptional skaters who can dissect opposing defenses in the blink of an eye.

From an offensive perspective, this is just a really, really deep squad. In fact, it’s such an impressive group that some may have even forgotten that captain Joe Pavelski hasn’t played since suffering a nasty upper-body injury on April 23.

Despite controlling just 48.4% of the shot attempts (11th), 47.6% of the scoring chances (13th) and 44.0% of the high-danger bids (14th) at 5-on-5, the Sharks boast the third-ranked offense (3.50 GPG) in the playoffs. They’re downright terrifying because they don’t need that many opportunities to make you pay.

As frustrating as it must be to face them, it must be that much more exasperating for Colorado. While the Avs aren’t a possession-based team, they actually own 55.6% of the scoring chances and 56.9% of the high-danger opportunities in this series. That’s good for an expected goal share of 55.6%. Their actual GF%? It’s not quite as pretty: 40.0. Bednar’s team has generated the better looks through three games, but its lack of finish has prevented it from seizing control.

Outside of MacKinnon and Mikko Rantanen (11 points in 8 games), there isn’t much firepower on hand. Carl Soderberg (1 point in 8 games) and Alexander Kerfoot (1 point in 8 games) — key contributors during the regular season — have been total no-shows in the playoffs. The same can be said for trade deadline acquisition Derick Brassard (0 points in 5 games). Why is he called Big Game Brass again?

Sure, Colin Wilson (5 points in 8 games) and Matt Nieto (6 points in 8 games) have fared reasonably well, but one is highly dependent on his linemates and the other thrives on rushes. San Jose’s defense has been deployed specifically to nullify that speed.

Ultimately, Colorado’s fate may rest in the hands of the back end. It must generate a push for the forwards because they aren’t accomplishing enough on their own. In essence, that falls on Tyson Barrie (8 points in 8 games) and Cale Makar (4 points in 6 games). They’re the two best Avalanche defenders when it comes to manufacturing chances, and they’ll need to go above and beyond their usual standards to rival San Jose’s offense. It seems unfair to ask for more from blueliners who are controlling 55% of the shot attempts and 60% of the scoring opportunities, but Colorado’s roster offers no alternative.

If any defensemen are up to the task, though, it may well be these two. Barrie is an elite point man with an uncanny knack for getting his shots through traffic. He currently leads all rearguards in shots and rebounds created per 60 minutes, which obviously places the onus on his teammates to set effective screens and battle for deflections and rebounds.

As for Makar…wow. The 20-year-old college phenom is as dynamic as they come on the blue line, pairing quick hands with otherworldly agility. On a team headlined by MacKinnon, he isn’t the fastest skater on the ice. He is, however, the most elusive, continually breaking free from opponents bearing down on him with quick pivots and explosive edges. Unlike Barrie, Makar is perhaps even more comfortable away from the blue line, wheeling around the offensive zone in hopes of uncovering a high-quality look.

He was considered the best defensive prospect outside the NHL for a reason, and he’s showcased his worth in short order: No blueliner in the playoffs has a higher points/60 at 5-on-5. Not one.

Since Colorado’s forwards can’t gather a head of steam against San Jose, Bednar must look to the defense for offense. Of course, the Sharks can counter with Burns and Karlsson, but Barrie and Makar pull the Avs much closer in that department than they are up front. Unless Philipp Grubauer (2.43 GAA, 92.1 SV%) stands on his head, conjuring some magic from the back end may well represent their only hope.