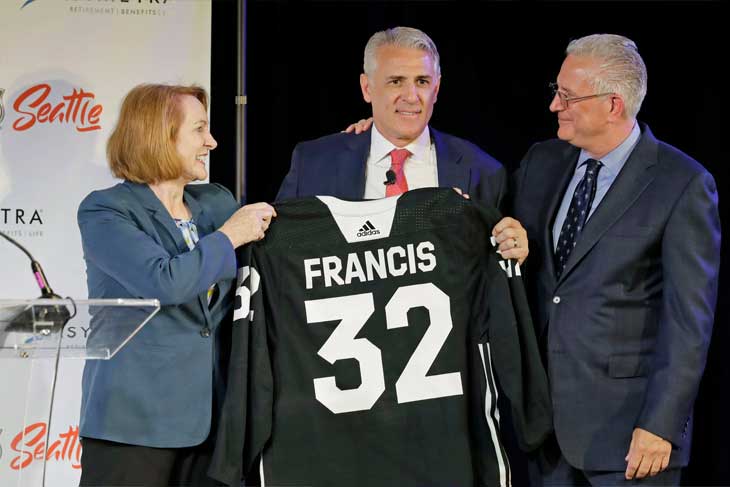 Nobody’s sure what the NHL’s newest franchise in Seattle is going to be called but the club doesn’t need a name to make hockey headlines right now. The latest news from the team is the hiring of hall of famer Ron Francis as its first ever general manager.

The 56-year-old native of Sault Ste. Marie, Ontario is no raw rookie though. He spent a dozen years working in the front office of the Carolina Hurricanes after retiring in 2004 and was their GM between 2014 and 2018 before being named president of hockey operations. Unfortunately for Francis, his squad didn’t make the postseason while he was in charge. However, he helped assemble the roster which made the playoffs this year and went to the Eastern Conference Final under GM Don Waddell. In addition, the Hurricanes’ farm club in the American Hockey League, the Charlotte Checkers, won the Calder Cup Championship this season.

Francis has two years to put a team together as well as hire coaches and assistants etc. since Seattle isn’t scheduled to face off until the 2021/22 campaign as the league’s 32nd franchise. The club was voted into the NHL by the board of governors last December.

The team’s roster will start to take shape in June of 2021 when Seattle will select established players from the league’s other clubs in an expansion draft. This draft will be conducted with the same rules and regulations which the Vegas Golden Knights abided by in the 2017 expansion draft. The rest of the clubs will be able to protect a specific number of players and Francis will be able to choose from those who have been left unprotected. He’ll also be allowed to wheel and deal with the other general managers by making trades before and during the draft and said he’s looking for speed, skill, hockey sense, competitiveness and character.

The league’s newest team will play out of the rink formerly known as the KeyArena with the stadium  currently being renovated to the tune of $930 million. There’s no timetable for the franchise to announce it’s new name and uniform colors and Francis is expected to have quite a bit of input on those decisions, which will likely be revealed before the year is out.

As a player, Francis became one of the best to ever lace up a pair of skates after being drafted fourth overall by the Hartford Whalers in 1981. The center endured 23 rigorous NHL seasons and appeared in 1,731 regular-season contests, which is currently the fourth-most in league annals. He racked up 549 goals and 1,249 assists for 1,798 points while skating with Hartford, the Pittsburgh Penguins, Carolina Hurricanes and Toronto Maple Leafs. He ranks second overall in NHL in assists behind only Wayne Gretzky and his point total is fifth best in history.

Francis won a pair of Stanley Cups with the Pittsburgh Penguins in 1990/91 and 1991/92 and scored the cup clincher in 92. He played 171 postseason games with 46 goals and 97 helpers for 143 points and was inducted into the Hockey Hall of Fame in Toronto in 2007. He took the Lady Byng and Frank Selke Trophies home with him in 1994/95 with Pittsburgh for his sportsmanship and defensive prowess. He then won the Lady Byng again in 1998/99 and 2001/02 as a member of the Hurricanes and was also awarded the King Clancy Trophy that season for humanitarian work and leadership.

Tod Leiweke, the CEO and President of the Seattle franchise, said Francis’ playing career definitely impressed him but what really stood out was the fact he was named the captain of three of the four NHL teams he played for and wore the C on his sweater for 14 years. In fact, he was already the captain of the Whalers by the time he was 21 years old.

After being introduced as Seattle’s GM, Francis told the media that he’s in no rush when it comes to hiring a head coach. He said he wants to take his time because so much can happen in the league over the next two years when it comes to who may be available. He added that the organization will be scouting players in the amateurs, American Hockey League, the NHL and Europe before the expansion draft. Francis also reminded everybody that the state of Washington has no income tax and that should make it an attractive destination for free agents.

The terms of Francis’ contract aren’t clear at the moment but it’s believed he was signed to a five-year deal. The first two will be eaten up assembling the team and front office staff and the final three will kick in once the squad begins to play in October of 2021.

While in Carolina, Francis drafted players such as Noah Hanifin and Sebastian Aho and acquired

Teuvo Teravainen from the Chicago Blackhawks in a trade and reacquired Justin Williams as a free agent. However, not all of his moves worked out as he also picked up goaltender Scott Darling from Blackhawks and inked him to a four-year deal. Darling spent last season in the AHL and was then traded to the Florida Panthers this summer and promptly had his contract bought out.

Francis was let go by Carolina after missing the playoffs in 2018 but was out of work for about 15 months. He admitted to being a little depressed after losing his job and said he realized how much he missed hockey when he worked with Hockey Canada at the World Championships last year and this season’s Spengler Cup tournament. He said the passion returned when he was around the players and coaches and knew that he wanted to return to the NHL when possible.

That opportunity presented itself when Leiweke called him and Francis said it’s a unique chance that doesn’t come along very often.