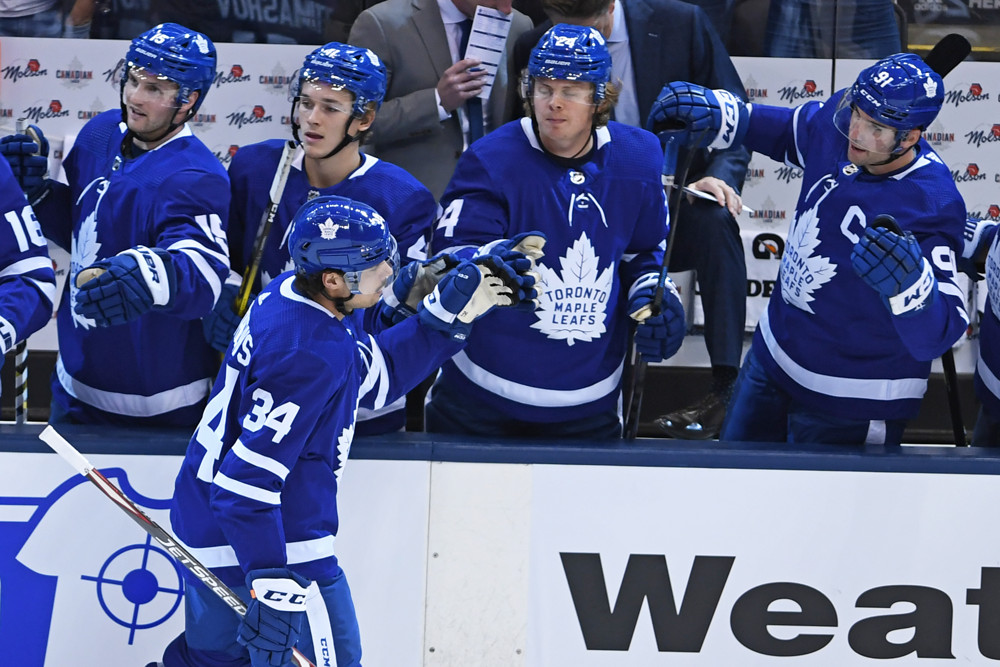 Though the Toronto Maple Leafs’ offseason revolved around Mitch Marner’s interminable contract negotiations, their roster quietly underwent a significant transformation over the summer.

There’s a lot to unpack there.

First and foremost, Barrie (4 points in 4 games) offers a massive upgrade on the right side of the defense. The 28-year-old is elusive and remarkably calm with the puck. Over the past five seasons, he ranks ninth in total points and power play points among blueliners. He’s simply a game-changer from the back end, as he facilitates breakouts, can create space for himself in one-on-one situations and boasts one of the finest point shots in the league. For a team whose blue line has constantly fired shots into shin pads in recent years, Barrie’s arrival is a godsend. Through four games, he’s been the club’s best defensemen by every metric (59.1 CF%, 61.4 SCF%, 75.0 HDCF%, 60.9 xGF%).

Sandin (1 point in 4 games) is similarly poised in possession. While the 19-year-old looks smaller than his official measurements (5’11”, 183 lbs) suggest, he isn’t afraid of traffic and displays great hockey sense. He could stand to cut down on some of his more aggressive tendencies, but that’s why he’s being eased into the pro game (11:47 TOI/GP). Following a few miserable years in Ottawa, Ceci (3 points in 4 games) is now a Leaf too. A stronger supporting cast and perhaps a lighter defensive load could help turn his career around.

Up front, Spezza (1 point in 2 games) has hopped on board as a fourth-liner who can chip in on special teams. He struggled mightily last season in Dallas, but a clear and limited role could represent just what the doctor ordered. Meanwhile, Kerfoot (3 points in 4 games) and Mikheyev (3 points in 4 games) offer greater pace than the players they’ve replaced. The latter, in particular, has flashed a tremendous combination of smarts and wheels. His hustle and reach have allowed him to disrupt the opposition all over the ice, including on the penalty kill.

Here’s Ilya Mikheyev using his speed to fly past the defence and make a scoring chance. #LeafsForever pic.twitter.com/EKtA8R8kYw

Early on, however, the revamped Leafs (2-1-1) look awfully familiar. A blazing-hot offensive start, more odd-man rushes than you can keep track of, shifts spent running around in the defensive zone, horrific net-front coverage: These are the Leafs under Babcock. On the surface, the numbers look pretty flattering. They’ve averaged 4.00 goals per game while conceding 3.00. At 5-on-5, they’re controlling 53.7% of the shot attempts (9th), 52.0% of the scoring chances (12th) and 57.8% of the high-danger opportunities (8th) for a 51.9% expected goal share (9th). With that said, you still get the sense they’re nowhere near fulfilling their potential.

On the breakout, Toronto remains a tale of two teams. When it makes short passes and skates into the neutral zone with speed, it’s an absolutely terrifying squad to play against. The Leafs are loaded with talent, and that talent is magnified when it’s carrying a head of steam. Unfortunately, it often relies on its bread and butter instead: the stretch pass. Babcock wants his troops to leave their end as quickly as possible, hoping to tip pucks into the offensive zone and retrieve them in order to establish time on attack. That’s a perfectly reasonable scheme…for any roster but this one. Toronto isn’t built to battle in the corners and win via its will. General manager Kyle Dubas has iced an incredibly skilled core that can overwhelm the opposition with its firepower. The Leafs just need to play to that strength because their offensive ceiling is even higher this season with a couple of new puck-movers in the mix.

As it stands, we have a star-laden club chipping, chasing and effectively wasting shifts that could be taken over by its electrifying forwards. The long bombs also result in more icings and thus more time spent with your back against the wall. Last season, Toronto committed the third-most icings in the NHL. Considering the Leafs aren’t the stingiest outfit to begin with, it seems as though their breakout undermines much of what makes them so dangerous. They’re neutering themselves.

Once they’re forced to defend, Toronto’s coverage resembles a fire drill. There’s no structure, as the forwards mix up their assignments and the defensemen alternate between highly conservative and mind-bogglingly aggressive approaches. There’s no consistency. No steadiness. Thus far, the club ranks 17th in scoring chances against, 21st in expected goals against and 22nd in actual goals against at even strength.

Granted, the coaching staff has implemented a positive wrinkle or two. Most notably, this season’s power play features Auston Matthews (5 points in 4 games) and Marner (5 points in 4 games) on their off wing, which provides the top unit with actual one-timer threats. Marner doesn’t exactly have goaltenders shaking in their boots, but Matthews is a whole different story. If teams thought he couldn’t pull the trigger from his off wing, they know better now. The 22-year-old has been firing lasers from that spot to start the year. Since he also possesses a world-class release on his wrist shot, this new configuration has opened up a world of possibilities with the man advantage.

Naturally, then, the coaching staff ignored that potent setup in favor of old tricks on Monday night against the St. Louis Blues. Down by one with the goalie pulled for an extra attacker, the Leafs placed Matthews wide on the left side once again. This static and hopeless alignment negated any one-timer threat, leaving the team in desperate search of answers that wouldn’t come. Toronto failed to conjure a high-quality chance and fell 3-2 at home.

On talent alone, Toronto is already a good team bordering on great. However, ill-fitting tactics and questionable decision-making could continue to limit their progress. Of course, these issues won’t necessarily stop the Leafs from producing another strong regular season. After all, the team is coming off two straight 100-point campaigns.

But success in 2019-20 will only take the form of a deep playoff run. Nothing less.

If this were a simple matter of early-season rust, there’d be no cause for concern. This doesn’t look like rust, though. The Leafs are displaying the exact same weaknesses that they always have in the Babcock era.