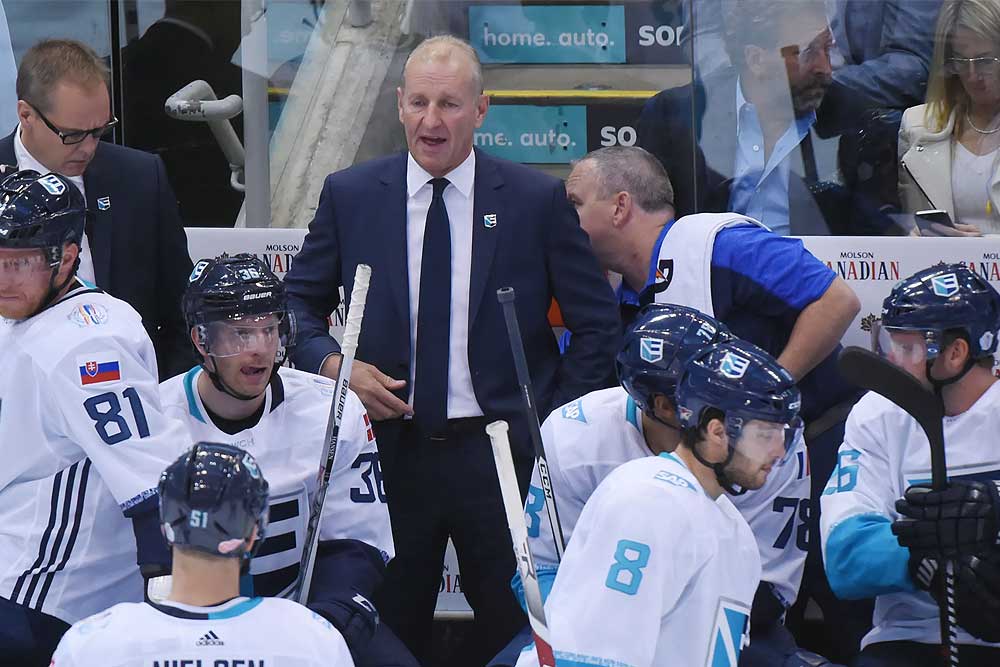 His time with the Oilers was limited to just 48 games though as he was in charge of the team during the 2012/13 campaign which was shortened due to a lockout. He went 19-22-7 that season, but also spent the two previous years with Edmonton as an assistant coach after being hired in 2010.

Krueger’s last job was coaching Team Europe at the World Cup of Hockey in 2016 and taking the team to the final where they were beaten by Canada. The native of Winnipeg, Alberta has been active in the world of sports though as he was chairman of soccer club Southampton FC of the English Premier League from march of 2014 until this April when he was sacked.

Krueger fared well in his job with the Swiss national team and the nation is now among the top six or seven in the world. He’s known for being able to motivate his young players and teach them how to be responsible defensively. Krueger coached Switzerland between 1997 and 2010 and helped them reach the Olympic Games in 2002, 2006 and 2010 and also led them to the World Championships a dozen times.

Along with coaching the Swiss, Krueger coached VEU Feldkirch in Austria starting in 1991 and the club won five consecutive league championships between 1994 and 1998. He didn’t do too bad with Edmonton considering the young squad he was in charge of, but Craig MacTavish, who was the team’s general manager at the time, fired him and replaced him with Dallas Eakins a former coach of the AHL’s Toronto Marlies. In hindsight it proved to be a mistake as the team went 36-63-14 under Eakins and he was gone less than two years later.

Krueger was a pro player for 11 years in Germany before turning to coaching and also wrote a book while there named Teamlife, which dealt with motivational and leadership skills. There’s no doubt he’ll need those skills in abundance with the struggling Sabres as the club hasn’t made the playoffs in the past eight seasons, which is currently the longest drought in the NHL. He may feel some pressure to succeed pretty quickly though since the Sabres’ last two coaches, Housley and Dan Bylsma were let go after just two years behind the bench.

In fact, Krueger is now the team’s fifth head coach since Lindy Ruff was relieved of his duties in February of 2013. The Sabres do have some skill to work with though as the roster currently consists of players such as Jack Eichel, Jeff Skinner, Rasmus Dahlin and Sam Reinhart. However, Skinner is an unrestricted free agent on July 1. The Sabres have the salary-cap space to offer this year’s 40-goal scorer a long-term multi million dollar contract but there’s still a chance Skinner may test the waters.

Buffalo started well in the 2018/19 campaign and at one point in November they sat atop the league standings after reeling off 10 straight wins. Their record over the last 57 games of the season was a poor 16-33-8 though and they finished with the league’s fifth-worst record. They won two games in a row just once since mid-December and at one point went 14 straight road games without a victory. The Sabres were especially weak in March when they won just two games and were shut out five times.

Krueger released a statement to the press which read, “I am excited and honored to join the Buffalo Sabres family and will strive to maximize the potential that lies within this team. I look forward to building on the many positives that have been established within the organization and I am especially eager to get behind the bench and represent this passionate hockey city.”

“I am excited and honored to join the Buffalo Sabres family and will strive to maximize the potential that lies within this team.” – #Sabres Head Coach Ralph Krueger

The new coach will need some help from general manager Jason Botterill as the team needs to add a few more experienced players to the lineup and really needs to re-sign Skinner. Botterill and Skinner’s agent have been talking for the last few months, but nothing has been hammered out as of yet.

The Buffalo players also need to learn how to win games during the playoff run as well as early in the season. This is especially true of their young core of Eichel, Reinhart and Dahlin. Botterill may also have to bring in an experienced starting goaltender to help steady the ship as well. It won’t be easy though as blue liners Zach Bogosian and Lawrence Pilut recently underwent surgery in the offseason and may not be ready to play once the 2019/20 season rolls around.

There were reportedly other head coaching candidates the Sabres were possibly interested in such as Jacques Martin, Dave Tippett, Todd Richards and Sheldon Keefe and Botterill may have put his own job on the line by hiring Krueger. The head coach will reportedly be paid between $11.5 and $12 million over the next three years so he didn’t exactly come cheap especially with just 48 games of NHL experience under his belt.

As with all head-coach hirings in the NHL it’s going to take some time to see how this move works out for the Sabres. There are those who feel Housley wasn’t given enough time behind the bench and should have been given another year with the club. There’s an equal amount of pressure on both Krueger and Botterill to get some results and in the meantime Buffalo fans will be able to debate all summer long about the team’s latest move.

I’m not overly thrilled but I’m not disappointed with the Ralph Krueger hire, I’m neutral about it for now. But the negativity around this team and this culture needs to change. So welcome to Buffalo Coach Krueger hoping for the best! #Sabres

The Sabres have been a nightmare, so only fitting they hire a Krueger.