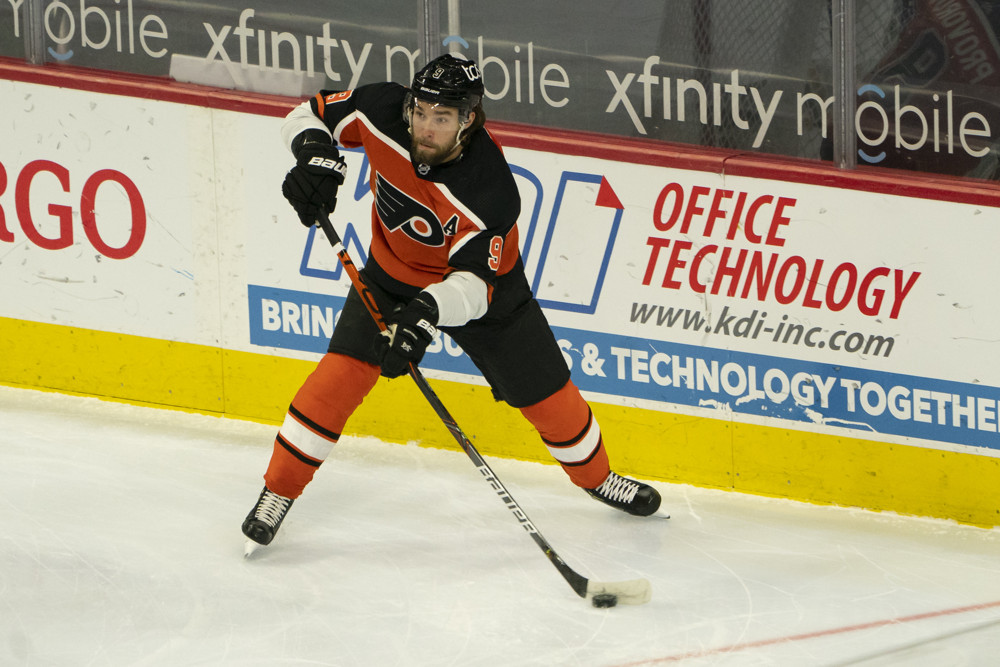 Appearances can be deceiving.

Despite their 8-3-2 record, the Philadelphia Flyers are performing considerably worse than they did a season ago. A confident group has turned into a listless unit that spends most of its time weathering the storm.

Ever since its playoff series against the Montreal Canadiens last summer, Philadelphia has clammed up to the point where it can’t quite get out of the starting blocks. The Flyers’ fluid puck movement from 2019-20 has been replaced by stray passes and choppy breakouts, whereas their drive has all but vanished.

Given these struggles, how on earth are they sitting on the eighth-highest points percentage in the league?

Well, shooting an NHL-best 13.6% helps. More specifically, Alain Vigneault’s squad is converting at a ridiculous 34.3% clip in the high-danger areas. That has yielded far more goals than they deserve: 3.54 per game (6th).

They don’t get many great looks, but they make them count:

Cutthroat opportunism isn’t a bad thing. That same trait has defined the Boston Bruins in recent years, and they’ve been ultra-competitive over that span. The problem for the Flyers is…they’re floundering in every department aside from scoring and goaltending (13th in OISV%). Since their gaudy shooting rates will almost certainly settle into more reasonable territory as the season progresses, they need to shape up. Otherwise, they’ll have the rest of the MassMutual East Division breathing down their neck in short order.

Philadelphia’s most noticeable bugaboo at the moment is its breakout. It simply can’t exit its zone with control. The Flyers’ game against the Bruins last Wednesday was a puck management nightmare. Whether the players couldn’t make simple passes or find their outlet in time to evade Boston’s forecheck, they just seemed a step behind the pace. And once their defensive shift was extended, their formation devolved into a fire drill:

Turnovers everywhere you look, multiple players claiming the same assignment and goaltenders ultimately fending for themselves.

Look at the stark contrast between Boston and Philadelphia’s breakouts:

On the Flyers’ first attempt, the man in the middle is too high up the ice, leaving Claude Giroux with no other choice but to chip the puck either along the boards or out of the zone. Boston closes that down in a hurry. On their second attempt, Giroux makes himself available, but Ivan Provorov doesn’t sense it. Rinse, repeat. The Bruins smother the breakout on the wall. When the puck eventually does reach the neutral zone, the Bruins reset, connect on a couple of crisp passes and David Pastrnak is instantly granted a decent bid on net.

That captures the Flyers’ troubles in a nutshell: Scoring notwithstanding, everything is far too difficult for them and far too easy for their opponents. And since their collective shooting percentage is sure to normalize over time, these issues will only become more apparent.

Provorov, in particular, is stuck in a rough patch. The 24-year-old has long been one of the most promising rearguards in the NHL, as he possesses all the physical tools required to dominate at the pro level. However, his decision-making leaves much to be desired. When Philadelphia is tripping over itself on the breakout, Provorov is often the common denominator. Among the 56 defensemen who have logged at least 200 minutes at 5-on-5 this season, the Russian ranks 53rd in xGF%. Virtually every name next to him on that list belongs to a bottom-feeder. That is…not ideal.

Under pressure, Provorov appears short on answers. He’ll skate himself into trouble or hold on to the puck for an eternity in hopes that someone else grabs the reins. His former partner’s (Matt Niskanen) retirement hasn’t helped. A No. 1 defenseman should dictate the flow of the game, but maybe he isn’t built to carry his own pairing. Dialing his minutes (26:00 TOI) back a touch and leaning more on Travis Sanheim and Philippe Myers could alleviate his burden and iron out some of the kinks.

Unfortunately, that lack of initiative has seeped into the club’s defensive coverage as well. The Flyers keep looking around for someone else to do the job. Seeing as defense is largely predicated on effort, that has generated some ugly sequences:

In the second clip above, take note of how Nicklas Backstrom (the original puck-carrier) is allowed to stroll through the slot untouched before flipping a backhand through Carter Hart. Joel Farabee inexplicably believes Justin Braun is marking Backstrom, which creates a glorious opportunity for a club that can cash in the blink of an eye.

On most nights, Philadelphia doesn’t seem ready to play. It can’t match the other team’s hunger and tempo. Opponents are always in their back pocket sooner than they expect:

Even when they outnumber the opposition, they’re somehow losing puck battles:

Scorching-hot shooting has prevented this from costing them too many points, but if the pattern persists, it will. Their poor play hasn’t caught up to them yet and they’re actually enjoying better goaltending this year (92.0 vs. 91.5 OISV%), but they’re still conceding goals at a significantly higher rate (3.08) than last season (2.77).

Whether it’s the leaders in the locker room or the bench boss, someone has to prepare Philadelphia to compete on a nightly basis.