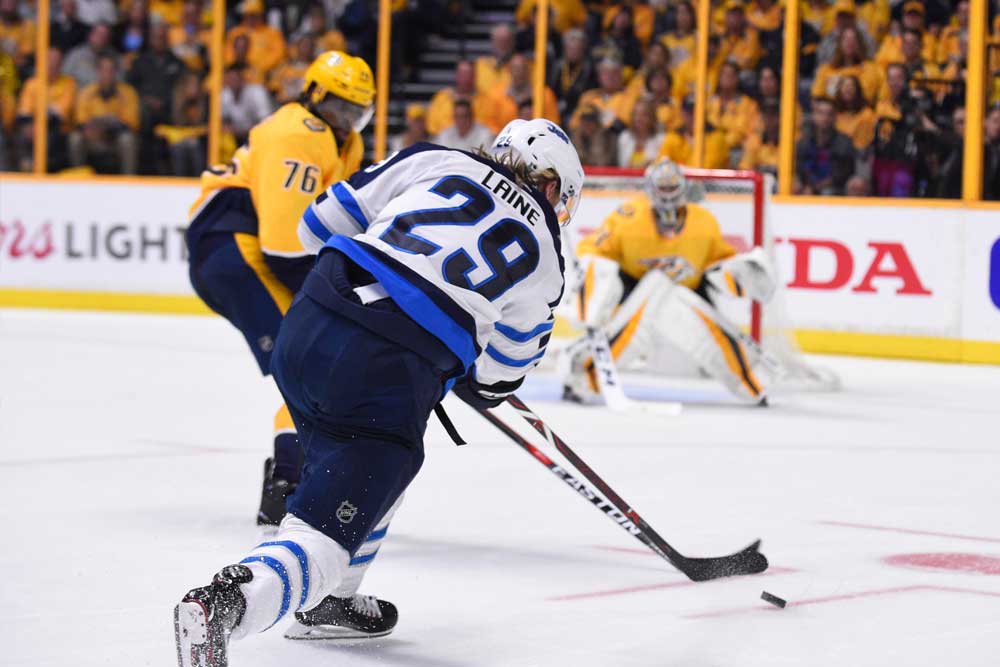 Since he’s too young to drink alcohol in most American states, Patrik Laine is probably thankful he’s playing in Canada with the Winnipeg Jets where the legal drinking age in Manitoba is 18. Not that I’m promoting teenage drinking or anything of the sort, but how else is the NHL’s hottest shooter going to celebrate all of the milestones he’s been setting?

The 20-year-old Laine has just enjoyed one of the greatest months of scoring in league annals and with his confidence growing it might be a long time before he starts to cool off. He’s been so busy in November it’s hard to decide where to start with his achievements, but let’s give it a go.

Perhaps his biggest accomplishment was netting a remarkable 18 goals in a dozen contests during the November alone. This might have been a bit unpredictable since the Finnish winger had three goals in his first seven outings. He then caught fire and has netted 13 times in the past half dozen outings including a five-goal outburst in St. Louis on November 24th. His last two goals of the month came in a 6-5 home win over the Chicago Blackhawks on Nov. 29th with his first goal of the game being the 100th of his young career.

It took Laine 179 games to reach the century mark and he became the fastest in franchise history at a rate of .56 goals per contest. Ilya Kovalchuk held the old club record when he netted 100 times in 209 outings while the Jets were playing in Atlanta as the Thrashers. Also, Laine tied Kovalchuk for the fastest 20 goals in franchise history as they both pulled it off in their 24th game of the season. The Russian did it on November 29th of 2007 and ironically Laine equaled the feat on the same date 11 years later.

Laine reached the 100-goal barrier at the age of 20 years and 224 days and is now the fourth-youngest NHL’er to hit 100 goals. The youngest to do it was ‘The Greatest’ Wayne Gretzky with Jimmy Carson the second youngest and Brian Bellows the third.

Since the NHL was born back in 1917, Laine is just the 10th player to find the back of the net 18 times in a month. The last star to do it was Russian sniper Pavel Bure who scored 19 times for the Vancouver Canucks in March of 1994. The record is 20 in a month and is shared by another native of Finland, the great Teemu Selanne, along with Joe Malone. Selanne bulged the twine 20 times in March of 1993 while also skating with Winnipeg while Malone tallied his back in February of 1921 with the defunct  Hamilton Tigers.

Fans should be used to seeing Laine trigger the goal light though as he entered this season with 80 goals in 155 games. He banged 36 in during 2016/17 as a rookie and followed up with 44 last year, which ranked second behind Rocket Richard Trophy-winner Alex Ovechkin of the Washington Capitals and his league-leading 49.

Laine managed to score 11 times in a week from November 19th to the 24th and naturally was named the league’s First Star of the Week. The youngster has been scoring by the bucketful due to his lethal shot and deadly one-timers. He releases the puck as quickly as anybody since former New York Islanders’ star Mike Bossy. He’s also hard to stop on the power-play with 39 of his 101 regular-season markers coming with the man advantage.

When November turned into December on the schedule we see Laine scored his 18 goals on a total of 54 shots on net, resulting in a shooting success percentage of 33.3 If he can keep it up he’ll chip in with 71 goals this year and likely top the league. He had a league-high 21 goals in 24 games as of December 1st, but likely won’t lead the NHL in points since he had gathered just three assists.

This seems quite low as you’d think his teammates would be scoring on Laine’s rebounds, but the fact is so many of his shots end up in the net. Also, you can’t blame him for perhaps not passing the puck as often as he could since he might as well just bury it himself.

Maybe the turning point of the youngster’s season came when he played a couple of NHL regular-season games back home in Finland in early November. The Jets visited Helsinki and took on the Florida Panthers twice. Laine scored a hat trick in game one and added a goal in the second tilt for a nifty four-goal haul in a win and loss. He was obviously motivated to perform well for his home fans after struggling early in the season.

Laine scored a hat trick of hat tricks in November if you like as he enjoyed a trio of three-goal contests. He now has seven hat tricks in his regular-season career which is second only to Gretzky’s 12 at the age of 20. Laine also trails Gretzky in a couple of other scoring categories as Gretzky had 167 goals before turning 21 years old and three others had more than the Jets’ star. In addition, Gretzky had also enjoyed a pair of five-goal games by then.

There’s another feel-good twist to Laine’s five-goal showing the other week as a pastor from Winnipeg named Christopher Haley won $1.1 million during a random draw at a local grocery store after the big game. The market gives out prizes when a Jets’ player scores a hat trick or more in an outing and Haley will cash in with at $50,000 a year over the next two decades. He also won $100,000 when Laine notched is fourth goal and $1,000 gift card when he netted his third.

Haley told the media he believes it’s a gift from God, but let’s face it, Patrik Laine also had a lot do do with it.