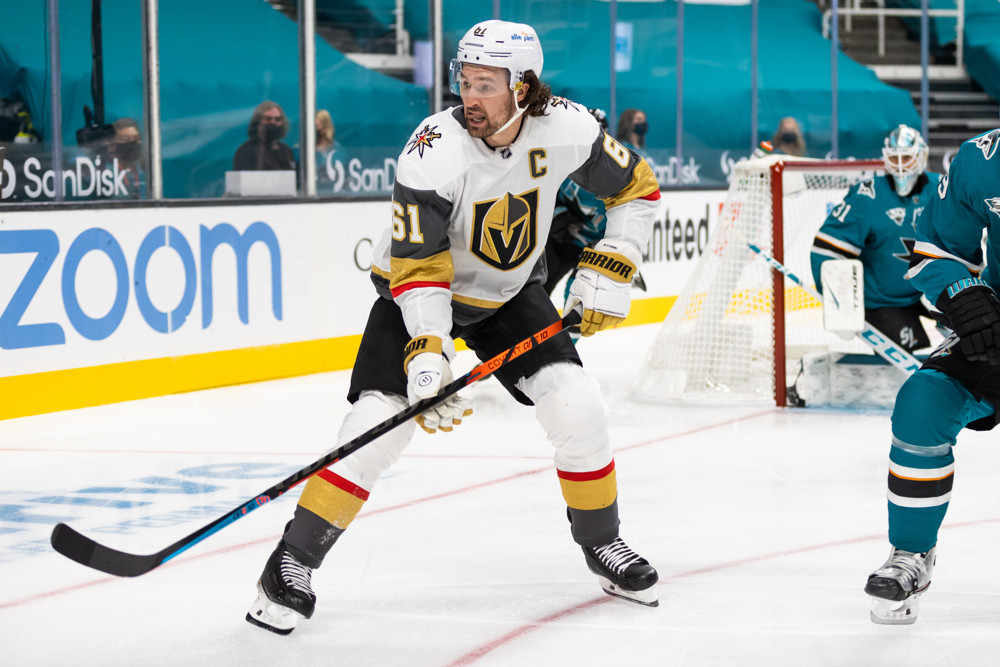 This was always destined to be an unconventional and tumultuous season. Roster issues, scheduling uncertainty and a perpetual bubble atmosphere are enough to disrupt any team’s flow.

This new reality has only reinforced the importance of leadership—and Vegas is currently enjoying plenty of it.

With key blueliners Alex Pietrangelo, Shea Theodore and Brayden McNabb as well as starting netminder Robin Lehner missing time, the 10-3-1 Golden Knights are still off to their best start in franchise history. Better yet, they deserve their seat atop the Honda West Division. Through 14 games, Vegas has controlled 53.9% of the scoring chances (5th), 57.0% of the high-danger opportunities (3rd) and 53.4% of the expected goals (4th) at 5-on-5.

Mark Stone is at the heart of the club’s early success. Vegas’ first-ever captain has provided a consistent and competitive presence to help the Golden Knights navigate uncharted waters.

Beyond his stellar production (16 points in 14 games), the 28-year-old is the rare winger who can impact the game so much at both ends of the rink that he routinely garners Selke Trophy consideration. Truth be told, he may well own the single most active stick in the NHL. If you hesitate for half a beat or expose even a fraction of the puck, there’s a good chance Stone will generate a turnover:

His defensive acumen has proven crucial this year because of Vegas’ injury troubles on the back end. Moreover, Pietrangelo has been a disappointing free agency prize thus far. Whether it’s a matter of health or timing, the $61.6 million veteran has yet to find his groove on a club that thrives on cohesive, suffocating puck pressure. He’s just not in sync with the club’s rhythm. Stone mitigates this issue with his uncanny knack for disrupting opponents.

On the penalty kill against Colorado, he hampers two Avalanche setups at the blue line, establishes inside leverage on Nathan MacKinnon on the entry and then facilitates the clearing play for Nick Holden:

With a 1-0 lead on Sunday night, he closes down MacKinnon’s space, blocks his shot and finally forces an off-target entry pass to ensure victory in the waning seconds:

His instincts and positioning are nothing short of superb. It’s no surprise, then, that the Golden Knights perform exceedingly well from a defensive standpoint when he’s on the ice. Among the 228 forwards who have logged at least 150 minutes at 5-on-5 this season, Stone ranks 29th in xGA60.

Stone’s influence extends far beyond his own zone too. He converts defense to offense to create free looks for his teammates on a nightly basis. For a group that isn’t teeming with clinical finishers, those additional waves of attack are pivotal in tilting the ice and limiting the amount of time Vegas spends defending the opposition.

Good luck squeezing the puck by him along the boards:

And if you’re sloppy in the middle of the ice, Stone will make you pay:

It only gets worse for opponents: He also possesses high-end skill, vision and poise under pressure. Dating back to the start of last season, Stone ranks 16th among forwards in points/60 and 11th in primary assists/60. In other words, he combines a brilliant two-way presence with big-time productivity. That makes him one of the very finest players in the world, and now that he’s settled in with the Golden Knights, he appears primed to reach new heights.

One of Stone’s strongest traits is his ability to slow the pace or speed it up when necessary. On Tuesday night, he displays how quickly he can process the game by hopping on a loose puck and instantly firing a laser-like pass to Max Pacioretty for a 2-on-1:

Now let’s appreciate his composure. Most penalty-killers blast pucks away as soon as they can. Not Stone:

On an odd-man rush, he fools the entire Avalanche team with a clever extra pass that Chandler Stephenson fails to corral:

With a backchecker breathing down his neck, he keeps his head up the whole way and connects with Zach Whitecloud:

Take note of how calmly Stone links up with Pacioretty and detects soft spots in coverage before feathering a saucer pass to Stephenson for a huge chance in tight. While his linemates struggle to fend off the Avalanche, Stone dissects them with complete ease:

The biggest beneficiary of Stone’s play is Stephenson, a Washington Capitals outcast who has become a top-six center on account of his wheels and generally responsible style. Over the past couple of campaigns, they’ve registered a 63.5 xGF% together. Apart, Stone sports a 61.1 xGF% and Stephenson plummets to a 48.0 xGF%. That’s the sort of impact Vegas’ captain has on his teammates.

When you combine his offensive and defensive contributions, Stone’s underlying metrics are naturally outstanding: 55.4 SCF%, 57.4 HDCF%, 57.8 xGF%. On the attack, he sets the table. On defense, he sets the tone. Stone never takes a night off, forcing opponents to earn every inch of ice they get and punishing them for any elbowroom they provide.

In a year full of surprises, his reliable, relentless and fiery nature is truly invaluable.