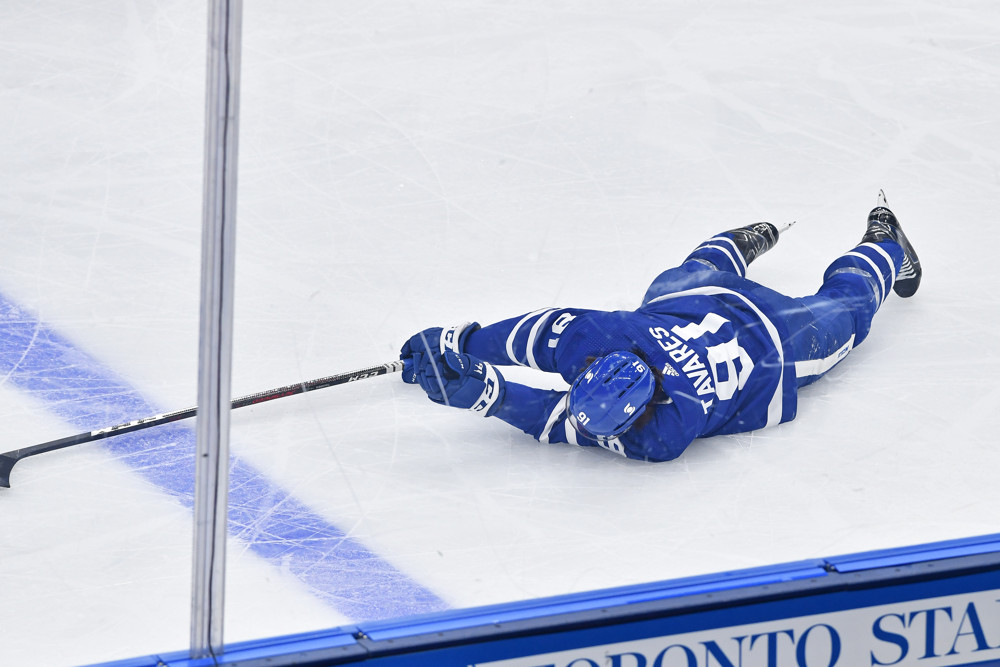 For the Toronto Maple Leafs more than any other NHL team, the 2020-21 regular season was merely a dress rehearsal. The club was ousted from the play-in qualifiers last summer following three consecutive first-round exits. General manager Kyle Dubas responded to these failures by introducing a wealth of grit, experience and defensive acumen to the fold. In theory, TJ Brodie, Nick Foligno, Joe Thornton, Wayne Simmonds and Riley Nash should help a hyper-talented nucleus reach true contender status.

The Scotia North Division-winning Leafs stormed through the campaign in anticipation of this very moment. They were chomping at the bit for their first taste of adversity. It would prove whether they would climb their way back into a fight or just crawl into the fetal position once more.

Unfortunately, they got much more than they bargained for on Thursday night.

A little over halfway through the opening frame, Montreal Canadiens defenseman Ben Chiarot knocked John Tavares to the ice. As Toronto’s captain tumbled over, his head collided with Corey Perry’s leg and snapped back in a gruesome sequence that would cause him to leave Game 1 of the first-round series on a stretcher. Frankly, a concussion might be the best-case scenario for Tavares here:

Not even two minutes later, the Habs caught the Leafs napping in the neutral zone and Josh Anderson opened the scoring in back-breaking fashion:

Over the remainder of the 2-1 loss, Sheldon Keefe’s troops looked like the rattled group we’ve come to know and grow frustrated with in the playoffs. Montreal should get credit for a solid road performance, but it’s not as though the Habs offered picture-perfect shutdown hockey. The Leafs enjoyed space and opportunities. They simply couldn’t find the killer instinct that has eluded them since the inception of this core.

Sure, they owned 54.5% of the expected goals at 5-on-5, but this was perhaps the single lowest-event game of the entire playoffs so far. A slight edge in that department is of no consequence.

On several occasions, Mitch Marner and William Nylander couldn’t even translate their opportunities into shots:

Those clips are emblematic of Toronto’s repeated postseason shortcomings. The Leafs aren’t getting run out of the rink. They weren’t against the Caps, the Bruins, the Blue Jackets or the Canadiens in Game 1. On the balance of play, they can hold their own. Victory is right there for the taking…but they just won’t take it.

Auston Matthews, this season’s Rocket Richard Trophy winner, downgrades from supernatural sniper to good scorer come playoff time. He continually flirts with breaking through as a postseason monster yet fails to fully deliver.

With the pressure ratcheted up, Marner and Nylander no longer enjoy the room afforded to them in the regular season. The two skilled wingers didn’t battle hard enough to topple an ill-tempered and well-prepared Canadiens team. Instead of bearing down and absorbing hits to make a play, they fumbled pucks at the point of attack and avoided contact as much as humanly possible throughout the contest:

Meanwhile, the seemingly improved defense continues to fall asleep at the wheel, missing assignments or coughing up pucks for no particular reason:

Despite a ton of roster moves, the Leafs have yet to convince anyone that they’re any different this year. The bottom six remains as irrelevant as ever. The defense is still prone to mind-boggling gaffes. The goaltending is shaky. The power play is anemic (0/4).

Moreover, Keefe made a couple of questionable coaching decisions.

21-year-old puck-mover Rasmus Sandin replaced Travis Dermott in the lineup, and while the former is unquestionably the more offensively gifted blueliner, the latter is better suited to the intensity the Habs will bring to the table every night. On Thursday, Sandin alternated between over-aggressive and careless:

He was also made to look foolish by Keefe’s choice to slot Thornton on the top power play unit. A turnover by the veteran on a simple zone entry placed Sandin in a race he would never win against speed demon Paul Byron, which yielded the game-winning short-handed goal in the third period:

Once again, the Leafs found a way to lose.

Toronto can point to a laundry list of excuses. We won the xGF% battle. We ran into a hot goaltender. We struck iron. We can’t get a bounce. The Leafs are always this close, but they never break through:

Now Tavares is sidelined indefinitely. Obviously, that hurts their chances of progressing deep into the playoffs, but this team is still good enough to put up a fight in the first round. When will the players lay their bodies on the line? When will they display the unwavering drive of a championship team? As unfair as it feels without Tavares in the mix, this is the ultimate—and perhaps final—test for the Leafs as we know them.

They can’t let this setback define their season. They can’t add fuel to the belief that hockey in Toronto is cursed. Raise your standards. Embrace the challenge. Whether you muck it up in the trenches or bewilder the opposition with your offensive arsenal, just win by any means necessary.

It has never felt so necessary.