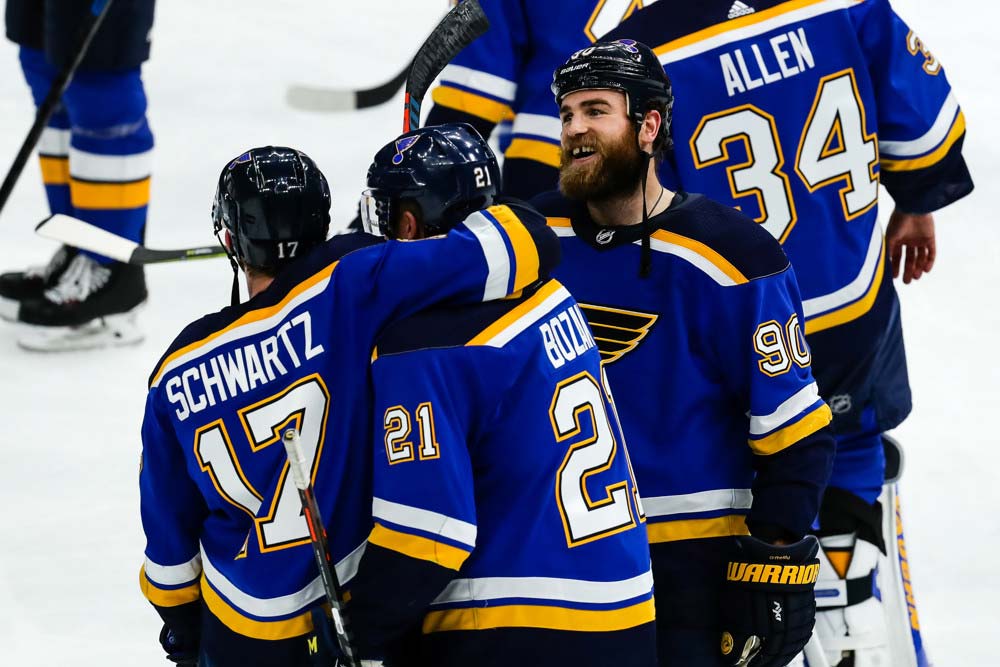 St. Louis Blues fans have been waiting since 1967/68 for a Stanley Cup and they’re now half way there after edging the Dallas Stars four games to three in the Western Conference semifinals. The Blues were forced to go to double overtime game seven at home and eventually won it when hometown hero Patrick Maroon notched the winner at 5:50 the mark of the second extra period. The Blues split the first two games at home winning 3-2 and losing 4-2 then split in Dallas with a 4-3 victory and 4-2 defeat. Dallas took game five 2-1 on the road with St. Louis rebounding 4-1 in Dallas to force the deciding game.

Patrick Maroon GWG in Double OT game 7!! Wow. The drama of an Overtime game 7! Nothing like it in sports. Dallas Ben Bishop made 52 saves but the surging #Blues advance to Conference Finals. pic.twitter.com/jUaP1PaQbX

A seven game series isn’t won or lost in one contest but an argument could be made that’s exactly the case when it comes down to a one-game, winner-take-all showdown. And the only reason this exciting outing went as far as it did was due to the fantastic play of Stars’ goaltender Ben Bishop. The Vezina Trophy finalist stood on his head while his mother nervously watched on from the stands and made save after save until the shot clock recorded a career-high 52 of them. It was the third game-seven appearance for Bishop and the first time he’s allowed a goal as his previous two outings ended in shutouts with the Tampa Bay Lightning.

The Blues took the lead through Vince Dunn at the 13:30 mark of the first period but it lasted just 145 seconds before Mats Zuccarello tied things up. The winning goal was greasy rather than a thing of beauty as Tyler Bozak won an offensive end faceoff and winger Robert Thomas cut towards the net with from the right side of the boards. His high shot rang off the goalpost then bounced off of Bishop. Maroon, who was born in St. Louis, was in the right place at the right time and knocked the rebound over the goal line from inside the crease. He also scored the game winner in St. Louis’ 4-3 win in Dallas in game three with just 98 seconds remaining on the clock.

The Blues had numerous chances to end the dramatic game long before they did as they outshot Dallas 31-4 over the last two periods but simply couldn’t put the puck past Bishop. The Stars played much better in the overtime sessions than they did in regulation time and created some excellent chances of their own. Blues’ rookie netminder Jordan Binnington was just as sharp as Bishop but certainly wasn’t as busy with 29 saves.

The Stars have now dropped two consecutive game-seven’s to the Blues as they were also ousted in the second round in 2015/16. For St. Louis, it was the first time they’ve come back from a 3-2 series deficit since storming back from 3-1 down against the Phoenix Coyotes in 1998/99. The Blues record is now 9-8 in game sevens while the Stars mark falls to 5-8.

With game seven of the St. Louis vs Dallas series going to overtime it marks the first time in league history that three game-sevens have reached overtime in the same season. The San Jose Sharks vs Vegas Golden Knights and Carolina Hurricanes vs Washington Capitals series were also decided in overtime in game seven.

It may have been a bitter loss for the Stars to swallow but the Blues dominated the first three periods of the game. They were also the better team in overtime even though Dallas created enough chances to win it. If there is a bright side, the Stars won’t lose their first-round draft pick this summer due to the defeat. A series win meant they would have had to ship their first-rounder to the New York Rangers as part of their February trade for pending unrestricted free agent Zuccarello. The loss means they owe the Rangers a second-rounder instead  but if Zuccarello is re-signed this summer the Stars owe a first-rounder in 2020 instead of a third-rounder.

The Blues will face either the San Jose Sharks or Colorado Avalanche as they play for the Western Conference title for the first time since 2015/16 when they were downed in six games by the Sharks. St. Louis will have home ice advantage if they meet the Avalanche but will start on the road if they face San Jose. The Blues are 3-4 at home in the playoffs this year and 5-1 on the road. They went 1-1-1 against the Sharks in the regular season and were 4-0 against Colorado with two wins coming in overtime and one in a shootout. But in the playoffs, the Blues are 2-3 against the Sharks and have lost their only series to the Avalanche.

The win over Dallas means the Blues are halfway to their goal of winning the Stanley Cup for the first time in team history. Their championship drought is technically as long as the Toronto Maple Leafs since they have never hoisted the silverware since entering the NHL in 1967/68 when the league expanded from six to 12 franchises. The Leafs last won the cup in 1966/67 but have never returned to the Stanley Cup Final since.

Since entering the league the Blues have won a President’s Trophy (1999/2000) and nine division championships. They reached the Stanley Cup Final the first three years of existence in 1967/68, 1968/69 and 1969/70. However, they’ve never won a game in the final series as they were swept in four straight by the Montreal Canadiens in 1968 and 69 and the Boston Bruins in 1970. St. Louis has made the playoffs in 43 of their 51 seasons including this year, missing the postseason just eight times. Their all-time playoff series record is 27-41 though.

There’s still a long way to go and a lot of blood, sweat and tears ahead of the squad in this year’s postseason. They could succeed if they can keep up their winning ways on the road but their odds will greatly improve if they can boost their losing home record.

Binnington is continuing his fine play in the postseason with a 91.5 save percentage while forward Jaden Schwartz has caught fire with eight goals, 11 points and a plus-7 rating after posting just 11 goals in the regular season. Alex Pietrangelo is providing offense from the blue line with two goals and 11 points. It’s unlikely the Blues are going to blow anybody away with their offense though as this team is basically built to play disciplined, physical hockey with a solid defensive system.

Being halfway there is a good start but the Blues will find the second leg of the journey’s going to be the toughest.