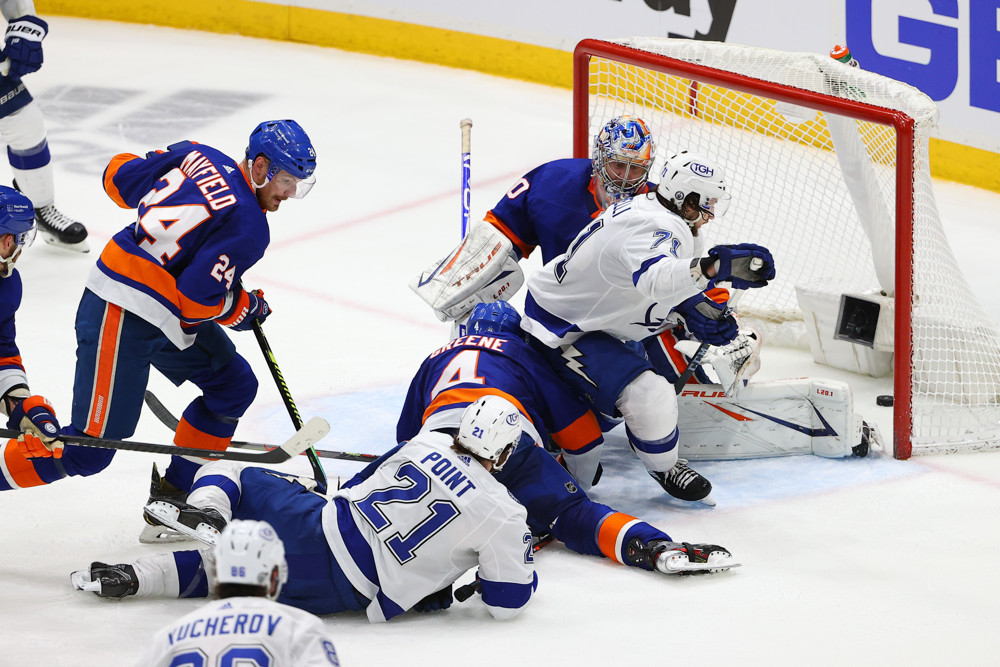 There’s no denying the Tampa Bay Lightning’s depth. Superstar winger Nikita Kucherov was sidelined for the entire regular season and they still clinched a playoff berth without breaking a sweat. Last year, they won a championship while their captain suited up for a single postseason game.

But it’s their versatility that truly propelled them to the 2019-20 Stanley Cup. If you want to trade chances with them, they’ll light you up like a Christmas tree. With some key roster additions (chiefly a revamped third line) and experience, they’ve also developed the ability to adapt their style as they see fit. They find the smartest path forward and commit to it 100 percent. The Lightning can now shift mid-game from loose, free-flowing action to lockdown hockey in order to outlast their opponents when the offense doesn’t come as easily.

That’s why Jon Cooper’s squad presents such a challenge. And that’s precisely how Game 3 of their third-round series against the New York Islanders unfolded.

Despite an apparent injury, Jean-Gabriel Pageau was once again the best Isles forward on Thursday night. His line alongside Kyle Palmieri and Travis Zajac was shot out of a cannon to start the contest, peppering Tampa Bay’s cage with shots:

However, Andrei Vasilevskiy and the blue line weathered the storm. Tampa Bay understood that it was in for a hotly contested fight, so it adjusted its stance from attack to counterattack mode. It boasts the more potent offense, so it could afford to roll with New York’s punches and then pounce when the right opportunity arises.

Midway through the opening frame, that approach was rewarded:

This wasn’t exactly a thing of beauty, but it displayed the sort of motor and guts that Cooper’s men have learned to harness. Blake Coleman rushes down the left wing and fires a weak shot on goal. He doesn’t stop there, though, hounding Noah Dobson to gain inside position and then flinging the puck into the slot to test the heart of New York’s defense. It fails. Yanni Gourde hops on the rebound and scores a vital ice-breaker.

From that point forward, Tampa Bay pulled back on the reins and settled into a defensive posture intended to keep the Islanders on the perimeter. Barry Trotz’s club attempted to mount a comeback, but his blue-collar personnel isn’t really built to chase the game.

Cal Clutterbuck did manage to pull the Isles even late in the second period, but the goal had more to do with Erik Cernak’s poor decision-making than New York’s offense:

Who double-taps a pass back to their own goaltender?

At any rate, the Lightning didn’t panic. Their chances would come. Adam Pelech made sure of it about 30 seconds later when he took an awful interference penalty. If you’re playing against the conservative version of Tampa Bay, the last thing you want is to gift them power plays. That’s when the killer instinct surfaces.

Sure enough, just as the penalty was expiring, Brayden Point found a rebound and displayed his cleverness in tight quarters, anticipating Semyon Varlamov’s push to his left and scooping a shot five-hole:

If any individual Lightning player understands the gravity of the moment, it’s Point. For a second consecutive postseason campaign, he has defined the word clutch. It doesn’t merely boil down goals either—although his league-leading 11 goals in 14 games are impressive. No, Point raises his entire three-zone game to another level in the playoffs. He’s more tenacious in the corners, lethal in the slot, focused at the dot (55.0%) and diligent on his team’s end of the ice.

Every night, he delivers a series of small plays that put his club in great position:

In Game 3, the rest of the team followed suit. They blocked shots, disrupted lanes and basically gave the Islanders a taste of their own medicine.

It didn’t matter that New York owned 62.1% of the expected goals. Tampa Bay didn’t offer them many clean opportunities. Besides, when considering the rosters involved, the Lightning are the team that can relinquish control and still come out on top. They’re just that dangerous.

Trotz’s group had to deal with a dialed-in defense that directed play to the outside:

On the few occasions when the Lightning faltered or there was a lucky bounce, Vasilevskiy was there to shut the door:

New York had no answers for a tighter and united Lightning front. There was no space out there, and the Isles don’t possess enough creativity to unlock a defense that features all hands on deck.

An extra attacker to close the game didn’t move the needle either. Half the time, Trotz’s men could barely navigate the first wave of defenders. And when they did enter the offensive zone, they struggled to move the puck into scoring areas. With one fewer skater on the ice, the Lightning were seemingly everywhere. They swarmed around the puck, held firm at their blue line and didn’t give their opponent an inch to work with:

That’s how Tampa Bay restored its home ice advantage. Now the Isles need to win three of the next four games to survive the third round. Given how seamlessly the Lightning can switch gears and rise to the occasion, that’s…a tall order.