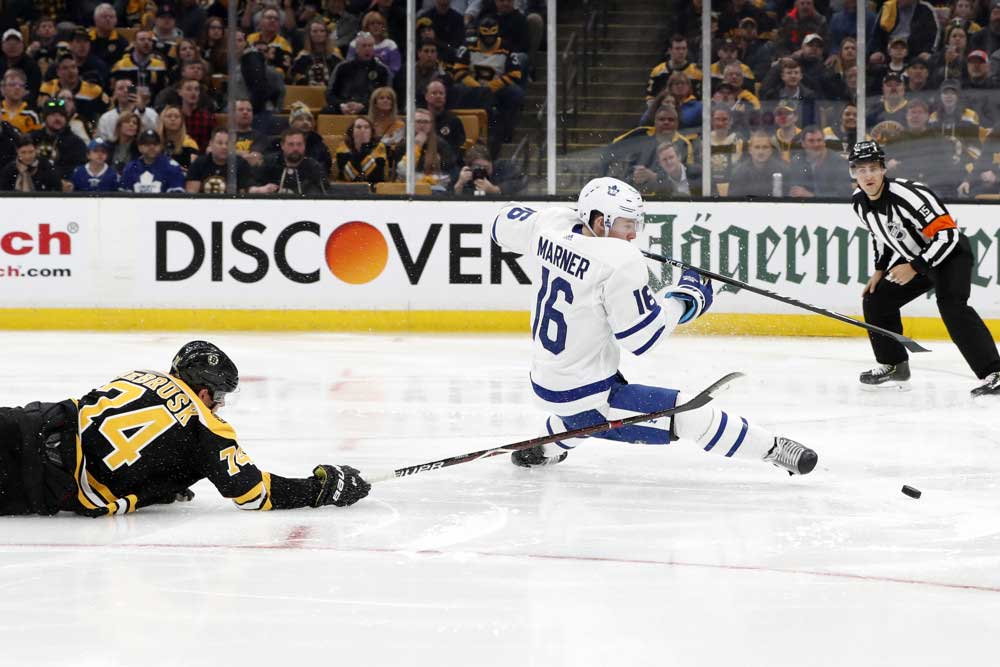 The Toronto Maple Leafs and Boston Bruins may look appear be even Steven on paper after their first two games of the playoffs in Boston, but there’s a lot more to it than that. The Leafs were 4-1 winners in the first game and Boston bounced back to win the second encounter by the same score.

However, the Leafs took advantage of a lethargic Bruins squad in the first contest, which was more or less a non-contact game, and looked totally outclassed in a nasty physical clash two nights later. To make matters worse, Leafs forward Nazem Kadri could be suspended for the second straight year in the postseason against Boston for his crosscheck on Jake DeBrusk with about five minutes remaining in the game.

Kadri, one of the few physical players in the Leafs lineup, was banned for three games against the Bruins last year and the repeat offender is now facing the fifth suspension of his NHL career. On the bright side for the Leafs, goaltender Frederik Andersen has been playing well and young winger Mitch Marner continues to make a case for being the team’s most valuable player, regardless of the presence and multi-million dollar contract of center Auston Matthews.

The much-maligned William Nylander is also quietly pulling his weight for Toronto and now has 10 points in 15 career playoff games while Marner has posted 15 points in 15 outings and Matthews has just seven in his 15 contests. The Leafs may advance to the next round without any output from Matthews, but he’s soon going to have to show he has what it takes to succeed in the playoffs and not just the regular season.

But while the Leafs and Bruins are tied at a game apiece, Toronto is technically in the driver’s seat as they have now gained home ice advantage. Three of the next five games will be held in Canada’s largest city and the series is now essentially a best three out of five set.

That being said, this series has definitely taken a turn for the worse for Toronto. Not only has it evolved into a nasty, physical affair they may also have to face the task without Kadri. And let’s face it, the current Leafs squad isn’t built for a grueling, in-the-trenches type of showdown.

There was a lot of criticism concerning the refereeing in the second game in Boston and this could be an advantage for the Bruins if the whistles are put away in the back pocket. The referees may have let game two get out of hand and the result could be a Kadri suspension and an injury to Boston blue liner Torey Krug. If the referees aren’t going to hand out any justice then the players will take it in to their own hands.

But with Kadri scheduled for a meeting with the NHL’s front office you can bet the league will now be keeping a closer eye on this series and it could ultimately benefit the Leafs. If Kadri is indeed banned, head coach Mike Babcock may move Nylander to center or insert Nic Petan into the lineup.

This is a series that definitely looks like it’s heading into the hands and strength of the Bruins though and the Leafs need to nip that in the bud in game three at home. Boston may be without DeBrusk, Krug, Connor Clifton and Marcus Johansson for the third game due to injuries and illness, but odds are they will all suit up for the swing game.

If they can’t play though, head coach Bruce Cassidy has the option of playing defensemen Jakub Zboril and  Steven Kampfer as well as forward Paul Carey.

This series may have already hit its chaotic peak and things could simmer down the rest of the way. The Leafs wouldn’t have a problem with that, but Boston needs to keep up the physical play and intensity as much as possible. If the rest of the games are decided on skill and talent then Toronto arguably has the edge, but if they’re decided on grit and determination then the Bruins should be favored by just about everybody.

Even so, Toronto needs more production out of Matthews as his two points in nine career playoff encounters against the Bruins simply isn’t good enough. Babcock either needs to experiment with his forward lines or the young man needs to take matters into his own hands and start producing on the scoreboard. The Bruins never have to go searching for the names of Brad Marchand, Patrice Bergeron and David Pastrnak on the scoresheet, but the Leafs do when it comes to Matthews.

There’s still a long way to go in the series and if history does indeed repeat itself then this tilt will go the full seven games the same way it did last season and in 2012/13. The difference this year is Toronto has gained home ice advantage and it could be crucial.

Of course, the Leafs suffered a Chernobyl-like meltdown in 2012/13 by blowing a 4-1 lead in game seven in Beantown with 12 minutes to go and coughed up a 4-3 lead in the third period last year to lose 7-4. With home ice advantage this season it could give Toronto the edge, but it doesn’t mean a thing unless they can win their first three home outings and end the series in six games. If this clash does reach a seventh and deciding game it will of course be held back in Boston.

We’ll see what happens in the next two contests in Toronto and wait until the verdict on Kadri is in and then revisit this intriguing showdown later in the week. It will also be interesting to see who can take the bull by the horns for each team in the next couple of games and who will be relegated to passenger status.