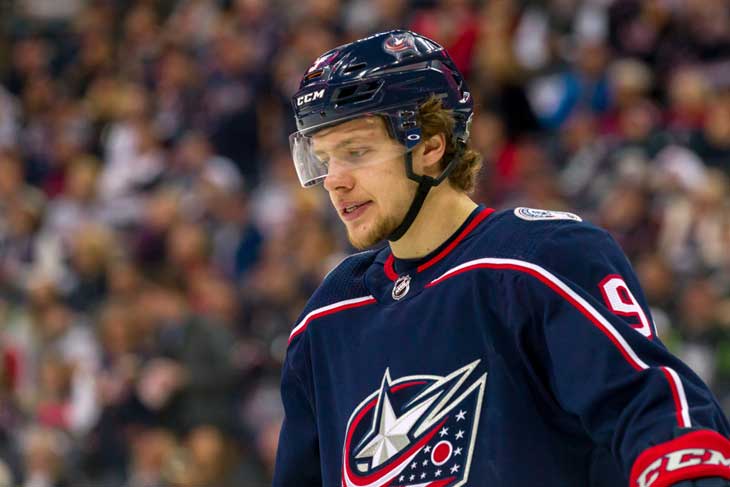 The NHL’s annual free agent frenzy which began on July 1st is typically a wild affair for the first day and then it slows down considerably. It’s often hard to keep track of who signed who so we’ll recap the first 24 hours of major signings in the free agency season as well as all the player trades since the St. Louis Blues hoisted the Stanley Cup.

Boston Bruins
Re-signed defenseman Connor Clifton for three years for $3 million and goaltender Maxime Lagace from the Vegas Golden Knights for a year at $700,000 . Forward Par Lindholm signed from the Winnipeg Jets for two years at $1.7 million and forward Brett Ritchie from the Dallas Stars for a season at $1 million.

Calgary Flames
Signed goaltender Cam Talbot from the Philadelphia Flyers for a year at $2.75 million

Columbus Blue Jackets
Signed forward Gustav Nyquist from San Jose to a four-year deal worth $22 million and re-inked goaltender Joonas Korpisalo for a year at $1.15 million and defenseman Ryan Murray to two years for $9.2 million.

Dallas Stars
Signed forward and San Jose captain Joe Pavelski to a three-year deal worth $21 million as well as defenseman Andrej Sekera from the Edmonton Oilers to a year for $1.5 million and forward Corey Perry from Anaheim to a year at $1.5 million

Detroit Red Wings
Signed forward Valtteri Filppula from the Islanders to a two-year deal worth $6 million and defenseman Patrik Nemeth from Dallas for two years at $6 million. Goaltender Calvin Pickard was also inked from the Philadelphia Flyers for two years for $1.4 million

Florida Panthers
Signed two-time Vezina Trophy-winner Sergei Bobrovsky from Columbus to a seven year deal for $70 million and forward Brett Connolly from the Washington Capitals to a four-year contract for $13 million. They also inked forward Noel Acciari from Boston for three years at $5 million and defenseman Anton Stralman from Tampa Bay for three years at $16.5 million

Signed defenseman Ron Hainsey from Toronto to a year at $3.5 million and forward Tyler Ennis from Toronto for a season at $800,000

San Jose Sharks
Re-signed forward Timo Meier to a four-year deal for $24 million and defenseman Tim Heed for a year at $700,000

Re-signed forward Sammy Blais to a year-long deal at $850,000 and inked defenseman Jake Dotchin from Anaheim for a year at $700,000

Tampa Bay Lightning
Signed goaltender Curtis McElhinney from Carolina to a two-year deal for $2.6 million and defenseman Luke Schenn from Vancouver for a year at $700,000. Goaltender Scott Wedgewood was inked from Buffalo for a year.

Toronto Maple Leafs
Signed forward Nick Shore from the KHL to a one-year deal worth $750,000 and forward Jason Spezza from the Dallas Stars to a one-year contract for $700,000. Forward Kenny Agostino was also signed from New Jersey for two years at $1.4 million

Vancouver Canucks
Signed defenseman Tyler Myers from Winnipeg to a five-year deal for $30 million and defender Jordie Benn from Montreal for two years at $4 million.

The Toronto Maple Leafs shipped two-time 30-goal scoring center Nazem Kadri and AHL defenseman Calle Rosen to the Colorado Avalanche along with a third round selection in the 2020 Draft for high-scoring blue liner Tyson Barrie along with forward Alexander Kerfoot and a 2020 sixth round draft pick.

The Leafs also sent rearguard Nikita Zaitsev to the Ottawa Senators along with bottom-six forward Connor Brown and AHL forward Michael Carcone in return for defensemen Cody Ceci and and Ben Harpur as well as a 2020 third round draft pick and forward Aaron Luchuk.

The Avalanche also added Andre Burakovsky from the Washington Capitals for fellow forward Scott Kosmachuk as well as a second and third rounder in 2020.

In addition, Colorado sent forward Carl Soderberg to the Arizona Coyotes for blue liner Kevin Connauton and a 2020 third round draft pick.

The New York Rangers dealt former college star forward Jimmy Vesey to the Buffalo Sabres in return for a 2021 third round draft choice. The Rangers also sent Neal Pionk to the Winnipeg Jets along with a first rounder in this summer’s draft for fellow rearguard Jacob Trouba.

The Sabres also added rearguard Colin Miller from the Vegas Golden Knights in return for a 2021 second round draft choice and a fifth rounder in 2022.

The Anaheim Ducks sent a fourth-round 2020 draft pick to the Montreal Canadiens for forward Nicolas Deslauriers.

The Habs also dealt forward Andrew Shaw and a 2021 seventh-round draft choice back to the Chicago Blackhawks for a second and seventh-round round pick next year and a third-rounder in 2021.

The Florida Panthers sent backup goaltender James Reimer to the Carolina Hurricanes for fellow netminder Scott Darling and a 2020 sixth-round draft choice. Darling was then placed on waivers as Florida bought out the remainder of his contract.

The Panthers also picked up forward Dominic Toninato from the Colorado Avalanche in exchange for defender Jacob MacDonald.

Carolina was busy as they shipped out rearguard Calvin de Haan along with forward Aleksi Saarela to Chicago for defender Gustav Forsling and backup goalie Anton Forsberg. In addition, the Hurricanes acquired forward Patrick Marleau from Toronto along with a conditional first round draft pick in 2020 and a seventh rounder next year for a 2020 sixth round choice. The Hurricanes then bought out the last year of Marleau’s contract.

The Philadelphia Flyers swapped winger Ryan Hartman to the Dallas Stars for forward Tyler Pitlick. However, Dallas didn’t offer Hartman a qualifying offer and he signed a two-year deal as a free agent with the Minnesota Wild for $3.8 million. The Flyers also picked up Matt Niskanen from the Washington Capitals for fellow blue liner Radko Gudas.

The Sharks also sent blue liner Justin Braun over to the Philadelphia Flyers for a second rounder in this year’s draft and a third rounder next summer.