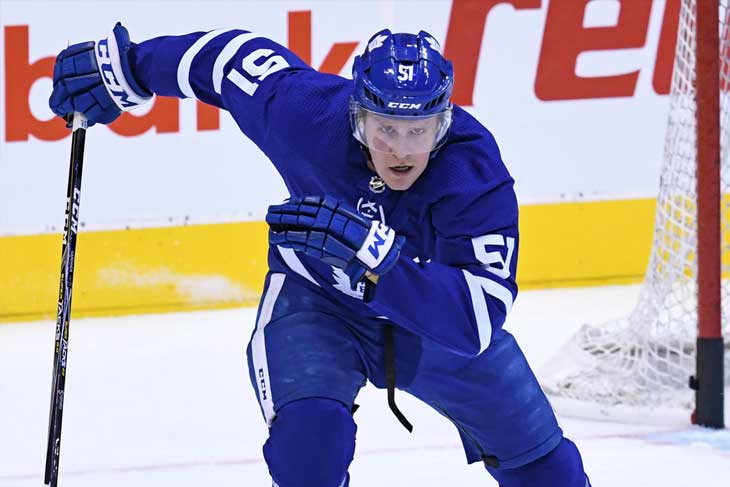 Professional hockey can sometimes be a cruel business but that’s why players get paid the big bucks. Free agent defenseman Jake Gardiner had hoped to stay with the Toronto Maple Leafs but with the team not having any salary-cap space he finally decided to bite the bullet and sign with the Carolina Hurricanes.

The 29-year-old native of Minnetonka, Minnesota inked a four-year deal worth $16.2 million on September 6th just a week before most NHL training camps get underway. It was no secret Gardiner wanted to remain in Toronto, but the Leafs simply had no money to pay him with as they still try to come to terms with restricted free agent forward Mitch Marner. It appeared Gardiner hung on to his hopes as long as possible before making an important career decision.

As far as Gardiner’s days in Toronto being numbered, the writing was basically engraved on the wall when general manager Kyle Dubas acquired fellow rearguards Tyson Barrie, Cody Ceci and Ben Harpur during the offseason. In addition, former first-round draft picks Rasmus Sandin and Timothy Liljegren will be fighting for roster spots in training camp.

Some fans may wonder why Gardiner was so adamant on staying in Toronto since he was such a polarizing figure as a Maple Leaf. There were no fence-sitters when it came to the talented blue liner as he was either loved or loathed by the team’s supporters. There’s no denying he made his share of gaffes and suffered some rough playoff outings, but Gardiner is a smooth-skating, effective NHL defenseman with an offensive flair. The fact is Gardiner was on the ice for more goals for than against since Toronto became a legitimate contender as he leaves town with a plus-52 mark over the past three seasons.

The 6-foot-2-inch, 200 lb. Gardiner was originally drafted by the Anaheim Ducks with the 17th overall pick in 2008. After being drafted the former high-school star decided to play at the University of Wisconsin where he racked up 19 goals and 56 assists for 75 points in 121 games. He was named to the Western Collegiate Rookie Team as a freshman and was a Second-Team All Star and Second Team All American in his third and final year. Gardiner also helped the USA to a gold medal at the 2010 World Junior Championships.

Although he was a highly-rated prospect, Gardiner never played an NHL game with Anaheim as he was traded to Toronto in February, 2011 with forward Joffrey Lupul and a fourth-round 2013 draft pick for rearguard Francois  Beauchemin. He then left college and headed east to Toronto where he suited up for the Toronto Marlies of the American Hockey League (AHL) in 10 games at the end of the season. He played 75 games as an NHL rookie in 2011/12 and notched seven goals and 30 points while being named to the league’s All-Rookie Team. The Leafs didn’t make the playoffs so Gardiner was sent to the Marlies where he scored two goals and 11 points in 17 postseason contests.

The NHL was locked out at the start of 2012/13 so Gardiner played with the Marlies and earned 10 goals and 31 points in 43 games before being called up to the Leafs when the season got underway. He leaves Toronto with 551 regular-season games under his belt along with 45 goals and 200 assists for 245 points. He also chipped in with two goals and 12 points in 26 playoff games. His NHL career-highs so far are 10 goals in a season with 47 assists and 52 points in a campaign.

Gardiner was quite durable as he missed just eight games in five seasons from 2012/13 to 2017/18 but sat out 20 contests last season with a back problem. He returned for the playoffs but it was obvious he wasn’t 100 per cent healthy. Worries about his condition may be one of the reasons Gardiner was signed by Carolina for just $4.05 million a year, which is the same money he made with Toronto over the past five seasons.

It appears money was the least of Gardiner’s concerns though as he likely could have received $6 to $7 million a year if he jumped ship as soon as free agency opened on July 1st or soon after. He was generally ranked as the best unrestricted free agent on the market but stuck to his guns though and didn’t sign elsewhere until as late as possible.

He now joins a talented blue line corps in Carolina which boasts the likes of Jacob Slavin, Dougie Hamilton, Brent Pesce, Justin Faulk, Gustav Forsling, Jake Bean, Haydn Fleury and Trevor Van Riemsdyk. That’s quite a talented logjam and with Carolina now being approximately $1.5 million over the 2019/20 salary cap, general manager Don Waddell will likely have to clear some space.

The 27-year-old Faulk could be on the trading block since he’s in the last year of his contract with a salary-cap hit of just over $4.8 million. However, he has a modified no-trade clause in his current deal. The 26-year-old Hamilton has no such clause in his contract and has two years to go at a cap hit of $5.75 million a season.

Gardiner wasn’t the only unrestricted free agent star to sign on September 6th as veteran forward Joe Thornton re-signed with the San Jose Sharks for one year at $2 million. The 40-year-old will be playing his 22nd NHL season in 2019/20. He posted 16 goals and 51 points in 73 games last season with four goals and 10 helpers in 19 playoff encounters.

Thornton is the NHL’s active leader in points with 1,478 in 1,566 contests which have come on 413 goals along with 1,065 assists with San Jose and the Boston Bruins. In addition, he’s the San Jose franchise leader in assists with 780 and is ranked second in both games and points at 1,034 and 1,024 respectively. We might as well add he’s third in Sharks’ history with 244 goals.