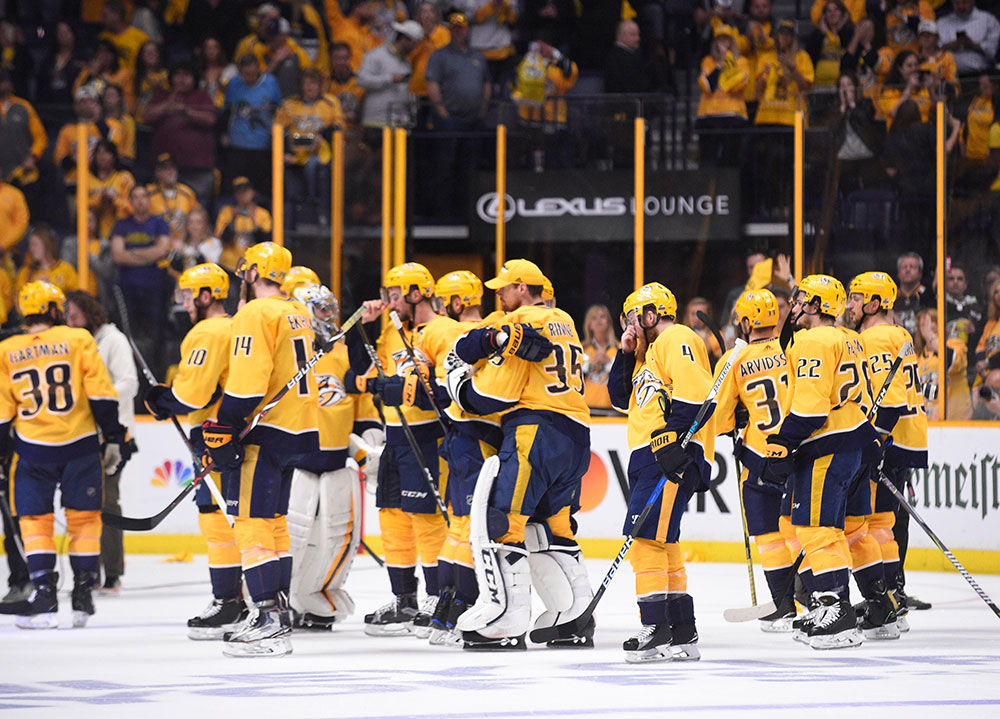 The Nashville Predators teased their fans in 2016/17 by reaching the Stanley Cup final only to lose to the Pittsburgh Penguins in six games. They were then eliminated in the second round of the Western Conference playoffs last season after being edged in seven games by the Winnipeg Jets. The loss to the Jets was particularly disappointing since the Predators had won the Presidents’ Cup as the league’s top regular-season squad at 53-18-11 for 117 points and game seven was held at home. Blame it on inconsistent goaltending from Pekka Rinne, a lack of secondary scoring, sub-par defensive play or whatever, but the team just couldn’t get over the hump.

Their fans are hoping for another Central Division title and a return to the final in 2018/19 though and numerous experts believe there’s a good chance it’ll happen. The team came storming out of the gate in October and went 12-3 in its first 15 outings. They were having success at putting the puck in the net with 3.40 goals-per game in that stretch, but were shining defensively as their 2.07 goals against per game was by far the lowest in the league. And oddly enough, they were leading the league in points per game even though they had the worst power-play and 10th-worst penalty-killing numbers in the NHL.

Rinne was in top form however with a league-high 94.9 save percentage and league-low 1.55 goals-against average while going 6-1 in eight starts. Credit also needs to go to backup goalie Juuse Saros as he was 6-2 with a 91.7 save percentage and goals-against average of 2.50. The netminders have been pushing each other as they’ve been more or less splitting the games and it’s definitely worked out well. The team was also getting consistent offensive production from forwards Filip Forsberg, Ryan Johansen, Kyle Turris and Viktor Arvidsson as well as blue liners P.K. Subban, Mattias Ekholm, Roman Josi and Ryan Ellis.

Games are won due to skill and competitiveness on the ice and this is where the organization as been excelling over the past few seasons. And because the team has been racking up wins on a consistent basis, general manager David Poile decided there wasn’t any reason to make many changes during the recent offseason. The organization believes it already has the players to make a serious run at the cup and it’s hard to argue with them. Poile did sign free agent defenseman Dan Hamhuis to a two-year deal in the summer though to complement what is arguably the best blue line foursome in the league already with Subban, Josi, Ellis and Ekholm, and the 27-year-old Ellis signed a $50 million eight-year contract extension.

I mentioned earlier that Rinne, last year’s Vezina Trophy winner as the league’s best goalie, was inconsistent in net during the playoffs and that’s why head coach Peter Laviolette is playing the 23-year-old Saros more this season. Rinne just turned 36 years old and it’s important he isn’t worn out when the postseason starts. Saros started 23 games last season and could start between 35 and 40 this time around. As far as the forwards go, their top shooters are all in their mid-twenties as Forsberg is just 24 years old while Arvidsson is 25 and Johansen 26. They should be together for several more seasons as Forsberg is signed until the end of 2021/22, Arvidsson until 2023/24 and Johansen until 2024/25.

Forsberg is the key here though as he tallied 64 points in 67 games last season and led the team in the playoffs with 16 points in 13 contests and is improving all the time. The future also looks bright as 19-year-old Eeli Tolvanen appears to be an elite prospect. He was drafted 30th overall in 2017 and notched 36 points in 49 outings for Jokerit last year, which set a scoring record in the Kontinental Hockey League (KHL) for a player his age. The Finnish native is now adapting to the North American game with the Milwaukee Admirals of the American Hockey League (AHL). Also, winger Kevin Fiala is just 22 and the Swiss native scored 23 goals and 25 assists for Nashville last season.

Since the Predators’ core players are relatively young and all under contract the team’s window to capture a Stanley Cup is a bit longer than most other clubs. Poile has put together an excellent roster with a lot of depth at all positions and Laviolette has done a fine job coaching them. But perhaps the biggest surprise to start the 2018/19 season is the way Nashville is playing away from home. The road warriors won their first eight games away from Music City with their only losses coming at home. And speaking of home, we shouldn’t underestimate the way their fans boost the players at the Bridgestone Arena even though they did drop game seven against Winnipeg in last season’s playoffs in Nashville.

The Predators definitely have one of the noisiest fan bases and rinks in the league. That’s almost a given though considering the downtown area is one of the liveliest in the world. The bars and honky tonk saloons open at 9 am with bands entertaining customers just an hour later. Let’s just say many of those sitting and cheering are well lubricated by the time the puck is dropped and it can make for a great atmosphere. Looking at the overall picture, whatever ailed Nashville in last year’s postseason has been rectified so far this campaign. Of course, the team needs to keep it up for the remainder of the season to reach the playoffs and then needs to elevate their game even more once they get underway. It won’t be easy, but there’s a good chance we’ll see the Predators back in the Stanley Cup final sooner rather than later.